It is possible to identify Th subsets – at least in part – by analyzing their unique cytokine secretion profile.

The iQue Qpanels® T Helper Kits from Sartorious have been designed to facilitate the measurement of Th cells’ cytokine secretion. These pre-configured multiplexed bead-based kits can be used to quantitate Th1 and Th2 (4-, 6-, or 9-plex) or Th1, Th2, and Th17 (7-plex) associated cytokines in cell supernatants.

As they are miniaturized assays, the iQue Qpanels® T Helper Kits only require 10 μL for each sample. Reagents are pre-mixed to support ease of use and streamlined workflows.

The full range of pre-mixed reagents and cytokine standards help streamline workflows, while templated data analysis allows all parameters to be automatically generated. These include event gates, the gating strategy, four or five parameter logistic standard curves and sample quantitation.

These factors combine to facilitate the rapid enumeration of Th cell cytokine profiles.

The multiplexed assay is able to simultaneously detect all proteins via a straightforward, single-wash protocol that offers users genuinely actionable results in a short time – just over 3 hours from sample addition to the generation of quantitated cytokine profiles.

iQue Qpanels® T Helper Kits feature pre-mixed multiplexed cytokine capture beads that have been coated with antibodies directed against Th cytokines. Each of these beads has been designed to bind one specific Th analyte and has been encoded with varying intensities of two different fluorescent colors.

This encoding enables the different beads to be tracked during quantitation on the iQue® platform, allowing users to view which cytokines have been captured by each specific bead.

It is also important to note that each kit includes pre-mixed lyophilized standards to enable a rapid standard curve setup.

The iQue Forecyt® software is able to calculate four or five parameter logistic curves, enabling quantitation of a sample’s Th cytokine secretion levels. This is done in a multiplexed system to allow for simultaneous binding and detection at picograms per milliliter (pg/mL) levels.

All of the kit’s components are pre-mixed for maximum ease of use. Users are simply required to dissolve the cytokine standards and dilute the capture beads prior to commencing the assay.

One wash should be performed at the end of incubation before resuspending the beads and reading the result on the iQue® Advanced Flow Cytometry Platform.

Cells were then stimulated using anti-CD3 | CD28 beads, while control cells did not include any stimulation beads. Supernatants were acquired at 1-, 2-, and 3-days post-stimulation. Prior to being assayed, these were kept frozen at -80 °C.

First, the lyophilized standard was dissolved and serially diluted 1:2 to prepare a 12-point dilution series. A total of 10 μL of each individual dilution of the standard curve was transported to a fresh 96-well assay plate.

Supernatants were then thawed before 10 μL of each was added to the assay plate. This was done in triplicate for each sample.

The pre-mixed capture beads were diluted to their working volumes before 10 μL was added to each well, whether this well included supernatant or standard. The contents of the wells were mixed before being incubated for 1 hour at room temperature.

A total of 10 μL of pre-mixed detection reagent was added into each individual well before this was mixed and incubated for a further 2 hours at room temperature.

Next, 50 μL of buffer – designed to function as a wash – was added to each well. The plate was centrifuged for a total of 5 minutes at 1100 xg before being aspirated using a BioTek ELx405 plate washer. After the aspiration had been completed, 10 μL buffer was added to resuspend the beads.

Finally, the 96-well plate was read using an iQue® Screener PLUS (VBR configuration). This reading took less than 10 minutes.

Using the iQue Forecyt® software, it was possible to ascertain curve fits for the cytokine standards.

These fits were then used to quantitate the number of cytokines secreted by the PBMCs by converting the median fluorescence intensity (MFI) associated with each bead’s captured analyte to determine the actual secreted concentrations. 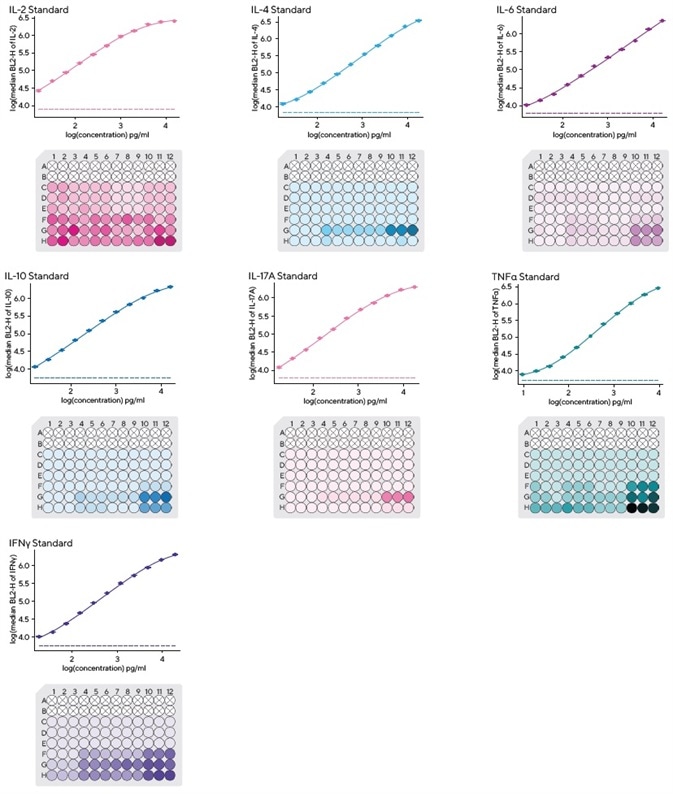 It was observed that there was a degree of donor to donor variation and some temporal differences in secreted cytokine levels. The addition of exogenous IL-2 to the media helped encourage T-cell growth and viability.

It was noted that this was detectable in control wells, but increased IL-2 production (approximately 2–3 fold over control) was observed in stimulated cultures from all three donors.

The complete set of donor PBMCs exhibited a Th1-type response, secreting IFNγ and TNFα post-stimulation. Secretion was found to increase in a time-dependent manner on days 2 and 3.

This data serves to highlight the application of iQue Qpanels® in T cell screening and the panels’ role in the analysis of effector function and identification of Th subsets. The data also demonstrates donor and time-dependent cytokine secretion. 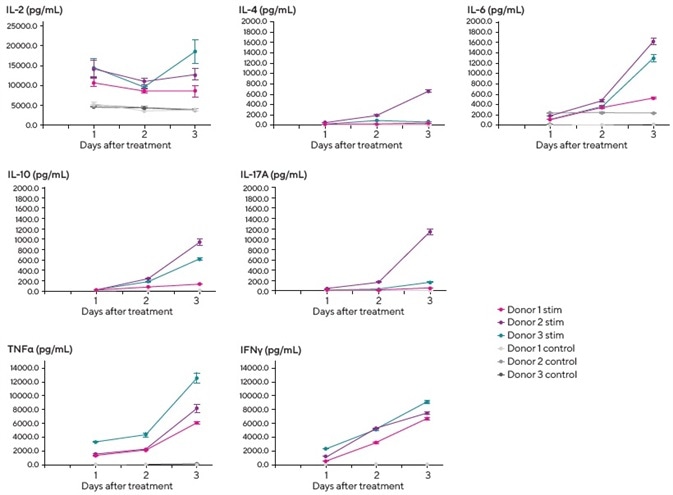 Produced from materials originally authored by Mark Carter and John O’Rourke from Essen BioScience, Inc., part of the Sartorius Group.

Sponsored Content by SartoriusJun 30 2022Reviewed by Alex Smith The main objective of the study outlined below was to determine...

The best methods to avoid contamination in pipetting

Sponsored Content by SartoriusJun 30 2022Reviewed by Alex Smith Preventing contamination in pipetting is absolutely vital when it comes to...

A practical guide to selecting a mechanical pipette

Sponsored Content by SartoriusJun 30 2022Reviewed by Alex Smith Extensively found and used in all kinds of laboratories, mechanical pipettes...

Why ultrapure water is critical for HPLC analysis

Sponsored Content by SartoriusJun 30 2022Reviewed by Alex Smith When conducting reproducible and interference-free analysis by liquid chromatography, the purity...

Women’s health services yet to recover from COVID-19 disruptions