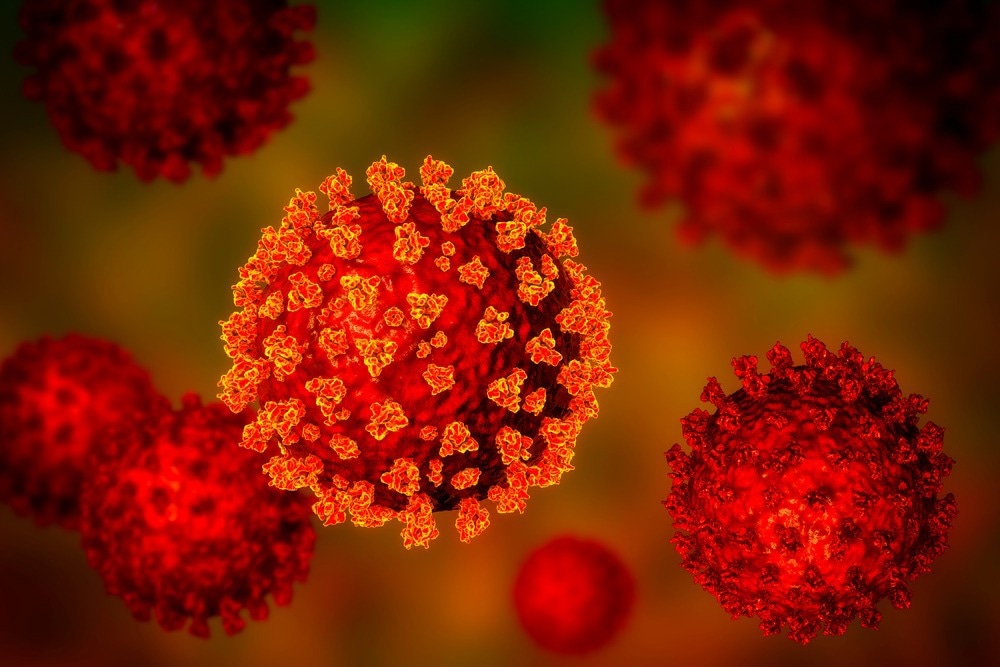 The emergence of SARS-CoV-2 led to the devastating COVID-19 pandemic. Despite the rapid development and subsequent distribution of COVID-19 vaccines, they are only capable of eliciting short-term antibody-mediated immunity.

Furthermore, some subsets of patients cannot safely be vaccinated or do not respond to current vaccines. Breakthrough or repeated infections are also common, especially due to the emergence of several new variants like the Beta and Omicron variants that can evade or escape immunity.

Repeated booster vaccine doses have been recommended to maintain antibody levels at adequately high levels. Monoclonal antibodies have also been approved to prevent severe disease in high-risk infected individuals; however, most have lost their efficacy in Omicron infections.

Nevertheless, researchers have continued to explore new avenues or repurpose drugs for their potential utility in treating COVID-19. These include oral drugs like paxlovid, which inhibits the viral 3CLpro protease, as well as molnupiravir, which introduces errors during the copying of viral ribonucleic acid (RNA).

In the current study, the compound N-0385 was described as a peptidomimetic that is directed against a host characteristic required by SARS-CoV-2 for infection.

SARS-CoV-2 enters host cells through the receptor binding domain (RBD) within its spike protein, which binds to the host cell angiotensin-converting enzyme 2 (ACE2) receptor. Importantly, this binding event must be accompanied by cleavage of the spike protein at two places. One cleavage is performed by the host cell furin at a polybasic site, which produces two separate spike subunits S1 and S2, that are still linked covalently.

The second cleavage involves TMPRSS2 at the S2’ site and occurs after receptor binding, which exposes the cleavage site upstream of the fusion peptide. This cleavage allows membrane fusion to occur, subsequently leading to the entry of the virus into the host cell by endocytosis.

Furin and TMPRSS2 inhibition has previously been shown to synergistically block viral replication in vitro. In the current paper, nanomolar concentrations of N-0385 effectively blocked SARS-CoV-2 by leaving the virus in a state of incomplete cleavage, wherein it is unable to fuse to and infect new host cells.

The researchers found N-0385 to have a highly selective action exceeding 106 without affecting other enzymes. Moreover, this compound suppressed infection by four SARS-CoV-2 variants of concern (VOCs), including the Alpha, Beta, P.1, and Delta variants. 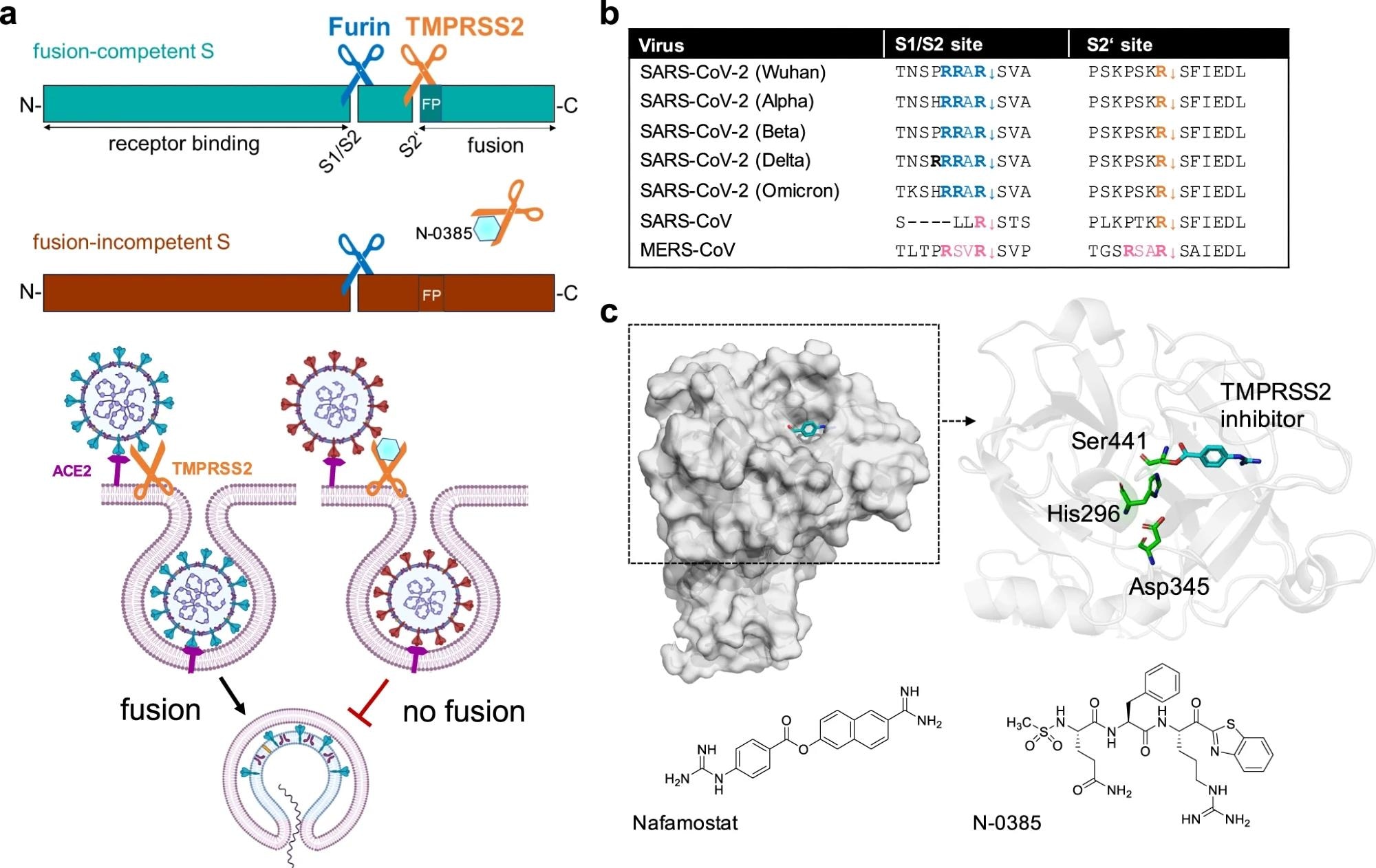 In mouse models expressing the humanized K18-hACE2 receptor, pretreatment with N-0385 reduced the severity of illness and mortality rate from SARS-CoV-2 infection. Similar results were obtained when treatment was provided after viral inoculation, with a single dose at 12 hours from Delta inoculation proving capable of reducing weight loss and viral loads.

In fact, when four doses of the compound were administered prior to intranasal inoculation, the lung tissue showed much lower viral titers, with no deaths reported among the treated mice. Thus, treatment must be administered before exposure or within a short period after exposure.

Female mice appeared to be more resistant to infection, or more responsive to the compound, than male mice.

One advantage of treating SARS-CoV-2 infection through host targets rather than viral targets is that escape mutations are much less likely, as they will inhibit cleavage at the highly conserved TMPRSS2 cleavage site of the spike. Thus, N-0385 will likely retain activity against future variants.

Secondly, N-0385 could be useful in treating infections with other viruses that use host TMPRSS2 as well, such as the influenza virus or other coronaviruses. Recently, the structure of this enzyme was unveiled, which could pave the way for more specifically designed inhibitors.

Importantly, TMPRSS2 does not have a crucial role in mice, and its physiological role in humans is currently unknown. Thus, its inhibition in humans may not cause severe adverse effects.

Further research will be needed to extend the therapeutic window, which appears to be short at present, like that of most antivirals approved for this use today. However, the use of N-0385 to prevent severe disease appears to be realistic, especially given its specific efficacy at nanomolar concentrations.

Future studies will also need to determine the actuality and basis of sex differences in response to SARS-CoV-2 infection and this compound. The extent to which N-0385 can be used to produce a synergistic effect with other antivirals acting through different mechanisms must also be investigated.

Broadly acting serine protease inhibitors have been assessed in clinical trials for COVID-19 activity, including nafamostat and aprotinin. Nafamostat must be given intravenously and is associated with vein inflammation at the catheter site, elevated sodium levels, and respiratory failure. Furthermore, the clinical effects of this treatment are small, though favorable, in high-risk patients on supplemental oxygen.

Aprotinin has reduced hospital stay duration and oxygen requirement without significant adverse effects being observed. This drug is administered by inhalation, which could be a better route as it can inhibit TMPRSS2 on the target airway cells exposed to SARS-CoV-2.

[The current study] provided robust evidence that host-directed inhibition of TMPRSS2 by the peptidomimetic compound N-0385, thus preventing spike maturation, is effective against SARS-CoV-2 in vitro and in vivo, including variants of concern.”

N-0385 may be potentially useful for treating those who do not have vaccine immunity or are at an increased risk for severe COVID-19, with the TMPRSS2 inhibitor treatment started soon after exposure.