The severe acute respiratory syndrome coronavirus 2 (SARS-CoV-2) pathogen has been circulating since the end of 2019, causing the ongoing coronavirus disease 2019 (COVID-19) pandemic. This led to the development of vaccines to reduce the number of hospitalizations and deaths caused by SARS-CoV-2. The initial reduction in the number of cases with a severe outcome that followed the large-scale rollout of vaccines later flattened out as new variants emerged, often with immune escape capabilities.

A new study published on the medRxiv* preprint server describes the beneficial effects of a third dose of the COVID-19 messenger ribonucleic acid (mRNA) vaccine in strengthening immunity among older adults. This group is at higher risk for severe and fatal outcomes following SARS-CoV-2 infection and was accordingly prioritized for the vaccines worldwide. 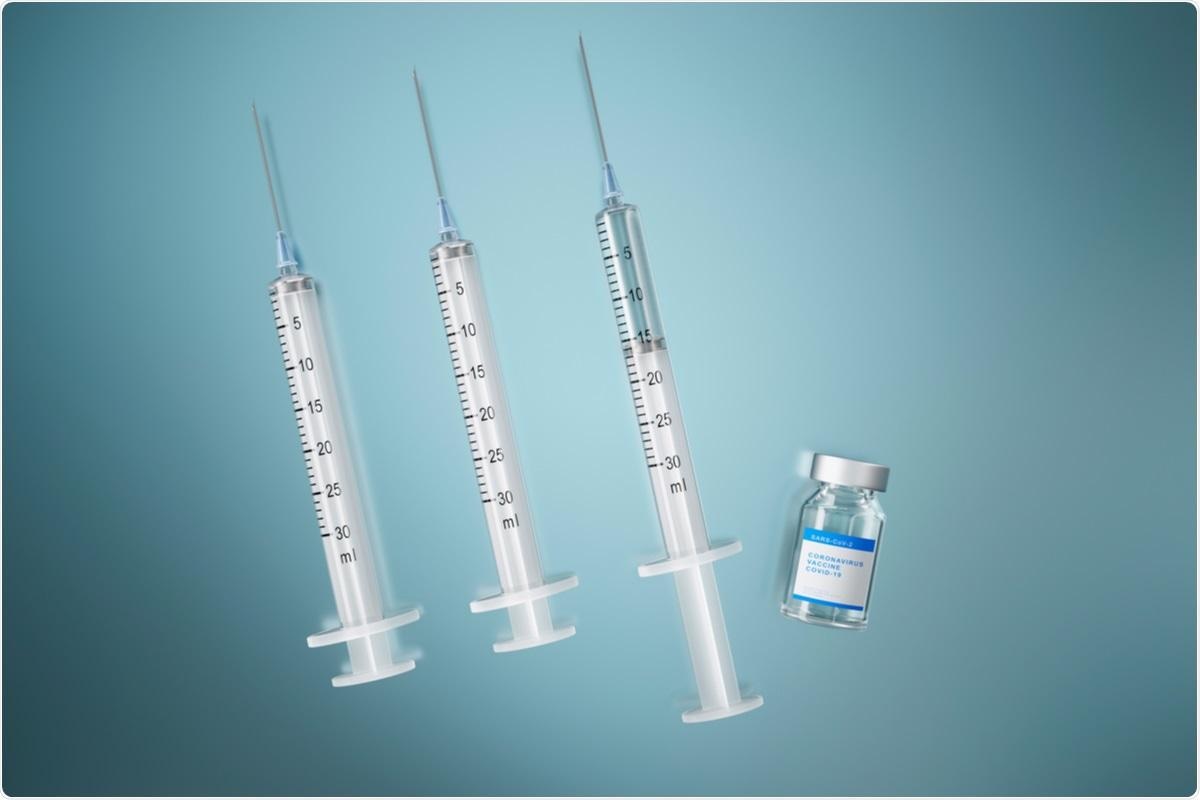 Vaccine-induced immunity is weaker among older adults and wanes faster. This has led many countries around the world to target this patient population for a third dose of vaccine in an attempt to boost their immunity levels to protective levels and thus prevent breakthrough infections. These efforts have become increasingly common following the emergence of the SARS-CoV-2 Omicron variant.

The first two vaccines to receive emergency use authorization against the SARS-CoV-2 in the United States were the mRNA vaccines from Pfizer and Moderna, called Comirnaty and Spikevax, respectively.

The current study reports the follow-up of antibody responses in a cohort of adults aged 24 to 98 years, both with and without a prior history of COVID-19. In addition, antibody response levels were measured at six months from when the study participants had received their second vaccine dose, as well as one month after a third dose had been administered.

The study results showed that two doses of an mRNA vaccine in older adults produced significantly lower levels of humoral response in terms of both binding and neutralizing antibodies as compared to younger people throughout the period of assessment. After a two-dose mRNA vaccine regimen, the predictors of weak binding antibody response included having more concomitant illnesses.

Conversely, having a longer gap between the first and second doses was linked to a superior binding antibody response, confirming earlier reports. However, binding antibody levels fell faster in older adults, which is likely due to the more significant number of health conditions in this group. 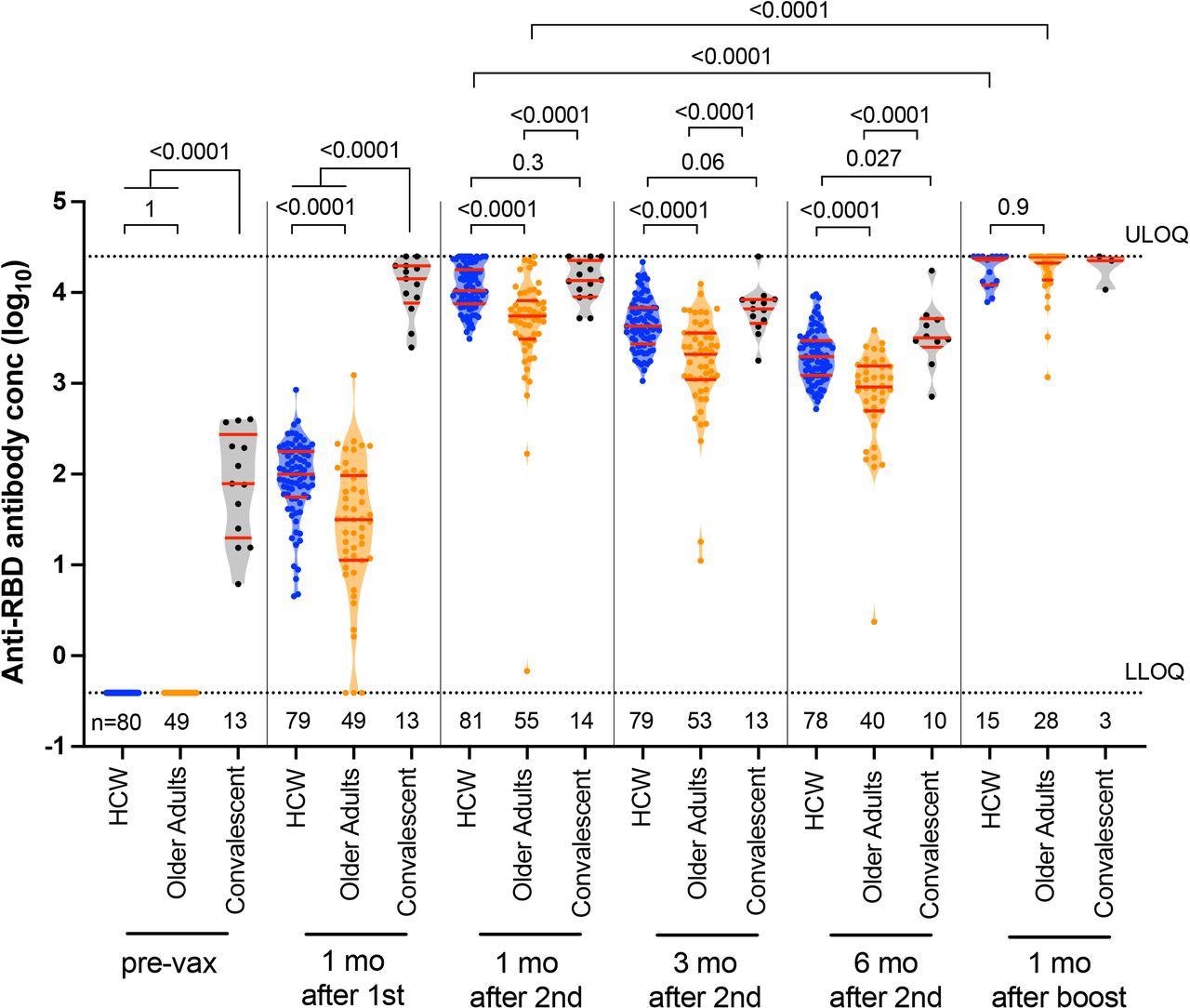 Longitudinal binding antibody responses to spike RBD following one, two, and three COVID-19 vaccine doses. Binding antibody responses to the SARS-CoV-2 spike RBD in serum, in HCW (blue circles) and older adults (orange circles) who were COVID-19 naive at study entry, as well as COVID-19 convalescent individuals (black circles) at six time points: prior to vaccination, one month following the first dose, one, three and six months following the second vaccine dose, and one month following the third or booster vaccine dose. The numbers of participants analyzed are indicated at the bottom of the plot. Red bars and whiskers represent the median and IQR. P-values were computed using the Mann-Whitney U-test (for comparisons between groups) or the Wilcoxon matched-pairs test (for comparisons across time points within a group) and are uncorrected for multiple comparisons. LLOD: lower limit of detection. ULOQ: upper limit of quantification. 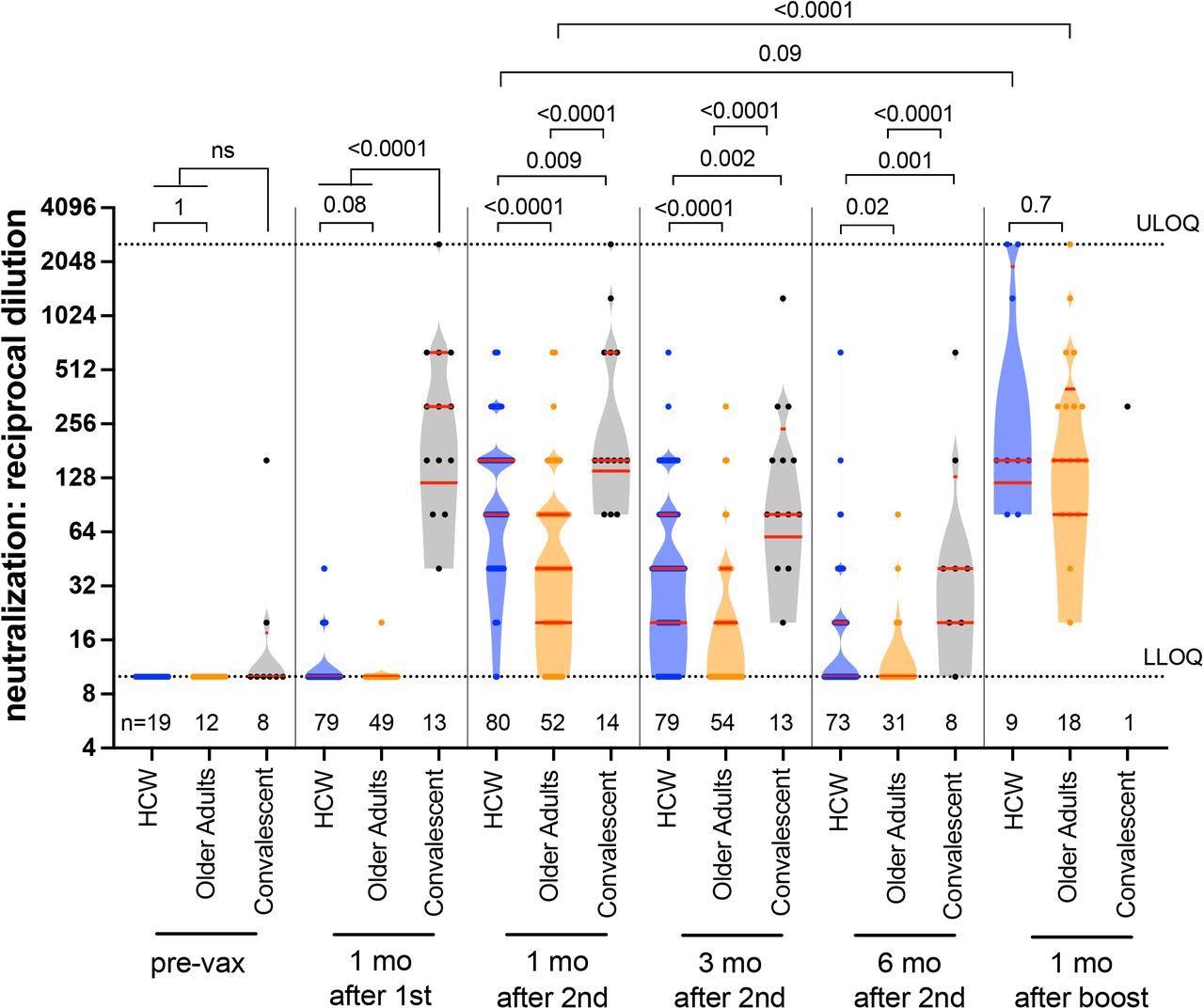 Longitudinal live virus neutralization activity in plasma following one, two and three COVID-19 vaccine doses. Viral neutralization activities, defined as the lowest reciprocal plasma dilution at which neutralization was observed in all triplicate assay wells, in HCW (blue circles) and older adults (orange circles) who were COVID-19 naive at study entry, as well as COVID-19 convalescent participants (black circles) at six time points: prior to vaccination, one month following the first dose, one, three and six months following the second vaccine dose, and one month following the third or booster vaccine dose. Plasma samples showing neutralization in fewer than three wells at a 1/20 dilution were coded as having a reciprocal dilution of 10, corresponding to the lower limit of quantification (LLOQ) in this assay. The highest dilution tested was 1/2560, which corresponds to the upper limit of quantification (ULOQ) in this assay. The numbers of participants analyzed are indicated at the bottom of the plot; note that only a subset of pre-vaccine plasma samples was assayed for this activity. Red bars and whiskers represent the median and IQR. P-values were computed using the Mann-Whitney U-test (for comparisons between groups) or the Wilcoxon matched-pairs test (for comparisons across time points within a group) and are uncorrected for multiple comparisons.

These findings support the recommendation to prioritize older adults for a third or additional booster dose within six months of receiving their second vaccine dose.

Notably, this was not the case with those who were double-vaccinated with an mRNA vaccine after recovering from SARS-CoV-2 infection. In this group, both binding and neutralizing responses were maintained at higher levels than those of naïve vaccinated individuals of all ages. 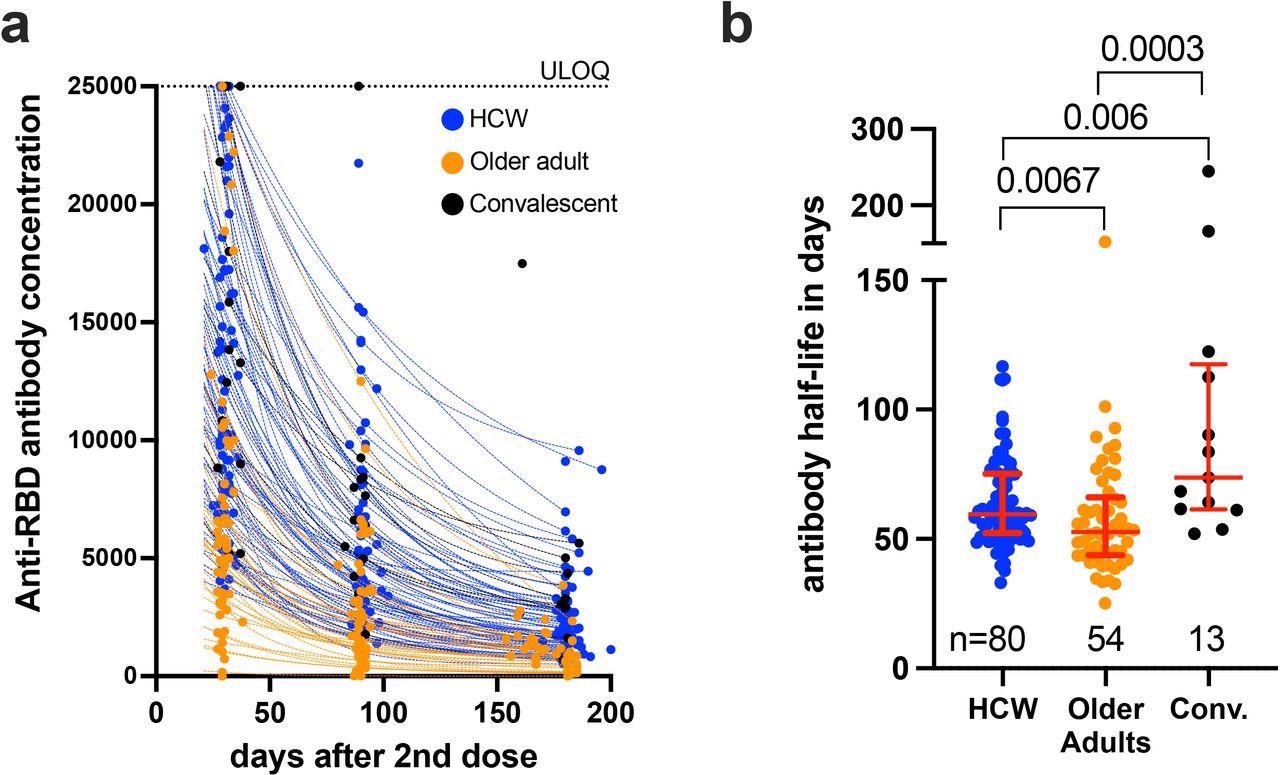 The researchers noted that age itself was not a driver of the rapid waning of antibody levels following vaccination, but rather the medical conditions associated with aging,

The current study supports earlier reports that the third dose of an mRNA vaccine boosts humoral immunity to a greater extent than that achieved with double vaccination among older adults. However, more research is needed to establish that the higher levels of humoral immunity achieved by a third dose are associated with protection from infection and symptomatic disease.

Secondly, the role of T-cell responses to the additional vaccine dose was not included in this study, despite available evidence that this immune response likely has a vital role in providing immunity against emerging SARS-CoV-2 variants.

Longitudinal follow-up and a broader range of testing for neutralizing efficacy against the currently circulating Omicron and other variants will be informative in helping arrive at a conclusion regarding the clinical utility of current COVID-19 vaccines.

“In conclusion, while the observation of strong binding and neutralizing antibody responses to third COVID-19 vaccine doses in older adults, including residents of long-term care, are encouraging, it will be important to closely monitor the decline in these responses over time in this population.”

Patients with alcohol-associated cirrhosis have poorer outcomes after ICU discharge, compared to patients with cirrhosis linked to other causes, according...

The serious risks COVID-19 may pose during pregnancy

In a recent JAMA study, researchers report on the potential for serious maternal illness or death during or following a pregnancy...

The ongoing coronavirus disease 2019 (COVID-19) pandemic has severely disrupted the world in terms of the disease burden and...

How SARS-CoV-2 infection progresses throughout the respiratory system

In a recent Thorax state of the art review, researchers discuss the progression of the severe acute respiratory syndrome coronavirus...

The rapid outbreak of the severe acute respiratory syndrome coronavirus 2 (SARS-CoV-2) worldwide has resulted in the coronavirus disease...

In most developed countries, several vaccines have been developed against the coronavirus disease 2019 (COVID-19), all of which target the...