Proteins are bio-macromolecules with a range of functionalities as a result of complex higher-order structures. As the end product of the “central dogma” in biology, proteins are considered the key orchestrators of life.

Developing a deep understanding of the association between protein structure and function is the key to unlocking the “code of life” and exposing the mechanisms of any given biological process.

While extracting proteins from natural sources offers valuable starting materials for characterization, protein samples can be scarce in quantity and inconsistent in quality due to sample variations that impose challenges in protein biochemistry.

This is where the concept of recombinant protein expression is particularly useful, a process that inserts a foreign gene encoding the protein-of-interest (POI) into a host cell using a vector and generates the POI by hijacking the host’s protein manufacturing machineries (Figure 1).

Discovered over 40 years ago, plasmids (typically presented as circular double-stranded DNA molecules) were identified as the primary courier of foreign genes among bacteria. Subsequently, they opened the gate to a new, advanced era of genetic engineering and manipulation to enable recombinant protein expression.

Over the course of four decades, numerous vector systems, as well as host cells, including prokaryotes such as E.coli and eukaryotes (e.g. yeast, insect cells and mammalian cells, Figure 1), have been prepared to satisfy the production of a broad spectrum of recombinant proteins close to their natural statues to advance the progress in biochemical research, vaccine and therapeutics development, industrial catalyzation and food processing,

Due to the inherent general complexity of proteins, protein expression and purification are often complex and challenging scenarios. Specific sequence or structural features within a protein can influence the overall yield and stability of the recombinant protein product.

A detergent or lipid-based stabilization reagent, therefore, is necessary throughout the purification and formulation of such proteins. Conversely, the over-expression and aggregation of the target protein might result in surprising physiological changes to the host cells, resulting in protein degradation and the production of mis-folded proteins by the host proteases.

The majority of proteins are fragile molecules vulnerable to environmental stresses throughout the expression and purification processes.

As previously mentioned, typically, a systematic optimization effort is required to formulate a practical procedure to express high-quality target proteins. However, there is no general “one-size-fits-all” approach, and the expression and purification of each protein should be customized in every case.

To demonstrate the optimization of key components in the recombinant protein expression workflow, a selection of case studies are assessed below.

Host cells define the potential folding and pattern of PTM of the recombinant protein. Depending on the attributes desired, the selection of host cells should be carefully considered.

As demonstrated in Figure 3, the attribute-of-interest for the target protein was the capacity to form unified oligomers. The protein was first expressed in insect cells due to its intracellular location, but throughout purification, higher molecular weight polymers were seen.

However, failure to remove the polymers by way of optimizing the formulation buffer led to a switch of the expression host to E.coli. The protein expressed by the 1st E.coli strain was prone to deterioration.

A second E.coli strain with extended endogenous protease knock-out was then employed. This strain was successful in the production of the stable target protein with requisite oligomer formation.

Vectors are the vehicles responsible for delivering the target genes into a host cell. They care comprised of basic components such as a multiple cloning site (MCS) to foster the gene-of-interest, a promoter to boost expression and antibiotic resistance genes to accommodate screening.

Vectors are typically optimized by commercial vendors to accomplish optimal transfection and expression efficiency. As exhibited in Figure 4, Sino Biological has set up a vector system that exceeded the performance levels of several competitors in protein expression level in HEK293. 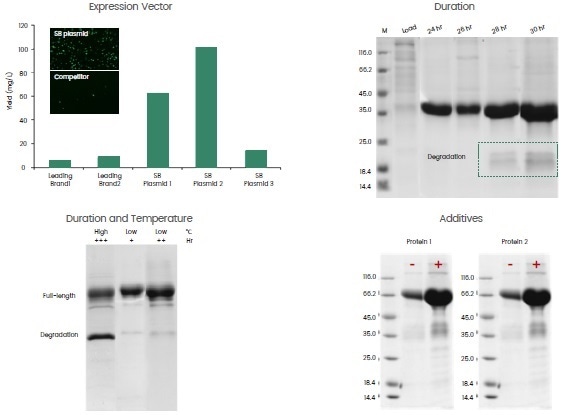 In addition to vectors, other conditions used in the host cell culture, e.g., duration and temperature, should also be improved to capture the target protein in its intact form. Meanwhile, using additives can occasionally help increase the target protein production.

Introducing inorganics into the process, such as metal ions and co-factors, has been proven to be useful for the expression of active enzymes as a result of their stabilization effects on the protein molecules.

Particular structural features on a target protein might result in an unstable, over-expressed form of a recombinant protein.

Areas of elevated hydrophobicity, high disorders and repetitive amino acid motifs are renowned for causing protein instability, so the presence of such areas should be noted.

As long as they are not directly involved in protein function, eliminating these areas may help improve protein expression (Figure 5).

The rule-of-thumb that should be considered when seeking the most suitable buffer formula during purification and in protein storage is that proteins are sensitive to their surrounding chemical environment. Fluctuations in pH, ionic strength and oxidative status would have an impact on protein stability.

Throughout purification, additives are also needed at certain times to stabilize the target protein or to facilitate tag exposure. As displayed in Figure 6, the inadequate extraction of target protein (a single-pass transmembrane protein) was conducted using detergent formula 1, likely due to the poor exposure of the His-tag.

Antibody/protein sequence library is synthesized via a PCR-based method and the target genes are then passed to HEK293 for expression. Purified antibodies/proteins are exposed to quality and activity evaluation, and the appropriate candidates are advanced to scale-up.

This system utilizes flasks for early culture methods, and a weekly capacity of 100~200 molecules can be produced depending on the volume of each culture.

This platform has overseen the completion of over 15 projects so far – with a maximum library size of ~600 antibodies. Virus proteins, such as influenza HA, NA and SARS-CoV-2 RBD mutates have also been generated using this platform to amplify its versatility.

Recombinant proteins are essential to the development of the current biologics landscape. Numerous factors can influence the quality and yield of recombinant proteins, including host cell, culture method, protein construct, vector, as well as purification approaches.

Recombinant expression of a protein expression is an extremely customized process as there is no “one-size-fits-all” solution. Finally, high-throughput recombinant antibody/protein expression has been accomplished by Sino Biological using HEK293 cells. This platform can be accessed for contracted research services for accelerating novel biologics discovery.

Recently, Pfizer made public a $525 million acquisition of ReViral’s novel therapy for respiratory syncytial virus (RSV). Subsequently, there has...

The polymerase chain reaction (PCR) is a technique for producing significant amounts of specific DNA from a limited number of...

ACROBiosystems, a leading manufacturer of recombinant proteins and other critical reagents for use in the advancement of target therapeutics, vaccines,...

Targeted antibodies for detection and monitoring

ACROBiosystems — the leading producer of recombinant proteins and other vital reagents to encourage the development of target therapeutics, diagnostics,...