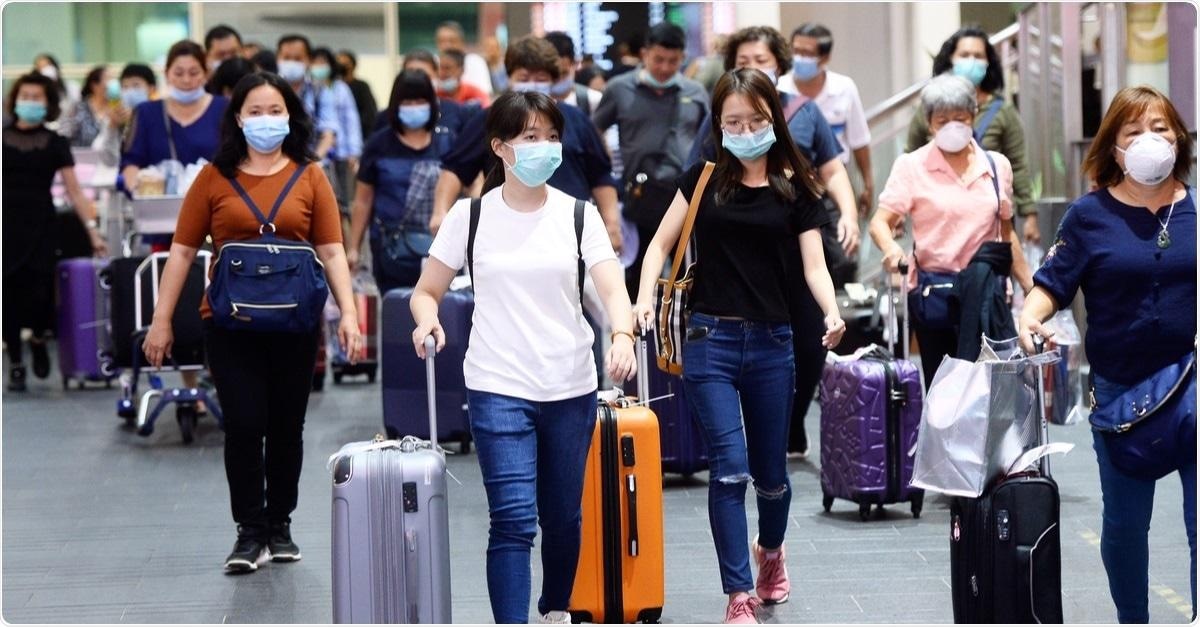 In a recent Nature Communications study, researchers evaluate the efficiency of these elimination strategies and have found that only three new introductions that were implemented during relaxed travel bans were responsible for 90% of the coronavirus disease 2019 (COVID-19) cases in Hong Kong. Moreover, the researchers observed that community outbreaks of COVID-19 were due to novel virus introductions from inbound traveling during relaxed control measure stringency, rather than a resurgence of circulating strains.

Diverse strategies were employed across the globe to control the spread of SARS-CoV-2. While most North American and European countries adopted suppression strategies to reduce case numbers, China, New Zealand, and Hong Kong pursued an elimination strategy to prevent the importation and community transmission of SARS-CoV-2.

Reports from Europe and North America showed exponential growth and cocirculation of SARS-CoV-2 lineages with evolution over time and space. However, there is limited information available on the dynamics of SARS-CoV-2 in countries that followed elimination strategies.

Hong Kong, with a population of 7.5 million, combined intermittent public health and social measures with compulsory isolation of cases and quarantine of close contacts. Furthermore, this city enforced highly stringent inbound travel regulations that have been relatively successful in preventing the community spread of SARS-CoV-2.

While several new SARS-CoV-2 lineages were reported to cocirculate dynamically in countries that had implemented their own distinct suppression strategies, Hong Kong has been relatively successful in controlling the spread of SARS-CoV-2.

As of November 2020, Hong Kong had already experienced four waves of COVID-19. Deep sequencing analysis revealed that only three virus lineages including SARS-CoV-2 B.3, B.1.1.63, and B.1.36.27 strains were responsible for 90% of the community-acquired SARS-CoV-2 cases in Hong Kong during waves 2 to 4. 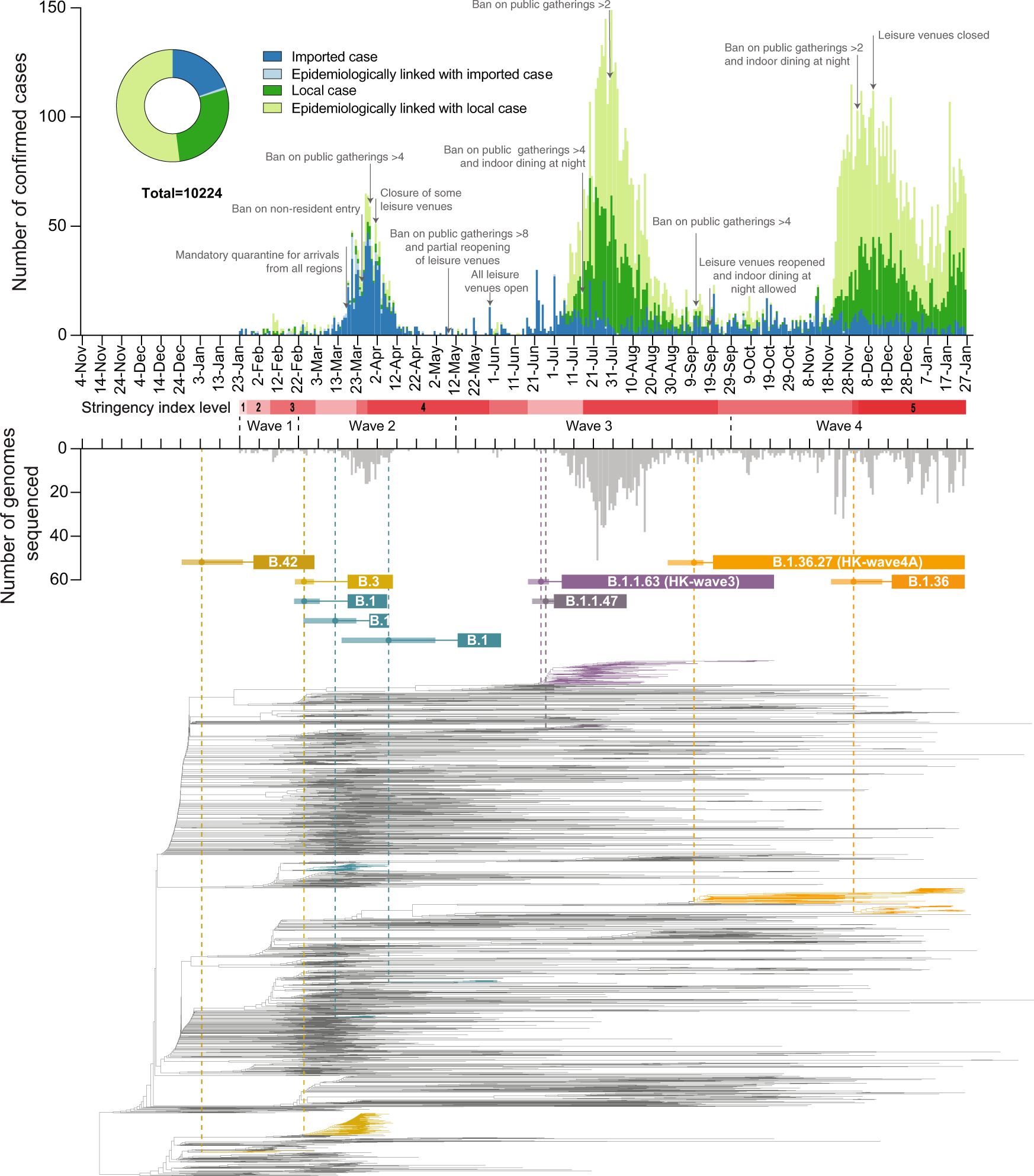 Confirmed cases (above) and sequenced genomes (below) are shown as bar charts across the four pandemic waves. Control-measure stringency applied in Hong Kong is based on the Oxford COVID-19 Government Response Tracker17. Red shaded bars delineate five levels of control-measure stringency in Hong Kong (Level 1: <40; level 2 : 40-50; level 3: 50-60; level 4: 60-70; level 5: >70). Time-scaled phylogeny of representative genomes from Hong Kong (n = 610) and overseas regions (n = 1,538) shows monophyletic clades containing at least five community cases in Hong Kong. The two largest Hong Kong lineages during HK-wave3 and HK-wave4A, B.1.1.63 and B.1.36.27, were subsampled to 100 and 65 sequences, respectively.

Previous studies that compared the ability of wave three and four strains to replicate and induce cytokine responses reported that biological variations in these strains were not the reason behind the observed variations in infection and transmission dynamics.

The team on studying the human mobility levels inferred from Octopus, a smart card payment system used by the majority of the Hong Kong population aged between 16 and 65, found that human mobility returned to pre-pandemic levels in Hong Kong during the early stage of wave four, even when the phase of stringent social control measures was in effect. These findings suggest that increased social mixing in the population aggravated by control measures adherence fatigue likely delayed the probability of virus lineage termination and eventually resulted in sustained local transmission.

“This study highlights that continued elimination through rapid implementation of control measures was effective, though the continued prolongation of community measures appeared to reduce their relative effectiveness, likely due to non-adherence related fatigue.”

The Hong Kong government promptly relaxed public health and social measures with the development of contact tracing solutions. However, new COVID-19 waves continued to occur as a result of new introductions, rather than the resurgence of previously circulating strains.

“Though Hong Kong did not apply highly strict control measures such as city-wide lockdowns or compulsory community testing, as applied in other regions, the combined use of prompt and proactive contact tracing with mandatory case isolation and contact quarantine requirements, and targeted community measures repeatedly led to the effective elimination of local SARS-CoV-2 transmission over the study period.”

In a recent study posted to the medRxiv* preprint server, researchers used a simple phenomenological model to investigate the role...

The severe acute respiratory syndrome coronavirus 2 (SARS-CoV-2) is an enveloped coronavirus with a single-stranded RNA genome. The SARS-CoV-2 exhibits...

In a recent study published in the journal Materials Today Advances, researchers reviewed the material properties and administration routes that...