Since emerging in December 2019, the severe acute respiratory syndrome coronavirus 2 (SARS-CoV-2) has infected over 353 million people and caused over 5.6 million deaths worldwide. Severe and fatal outcomes attributed to the coronavirus disease 2019 (COVID-19) are, in part, due to the induction of a hyperinflammatory immune response in host airway cells.

A new study published on the preprint server bioRxiv* analyzes this phenomenon, tracing it at the molecular level to the inhibition of the protective CFTR gene by the SARS-CoV-2 spike protein. 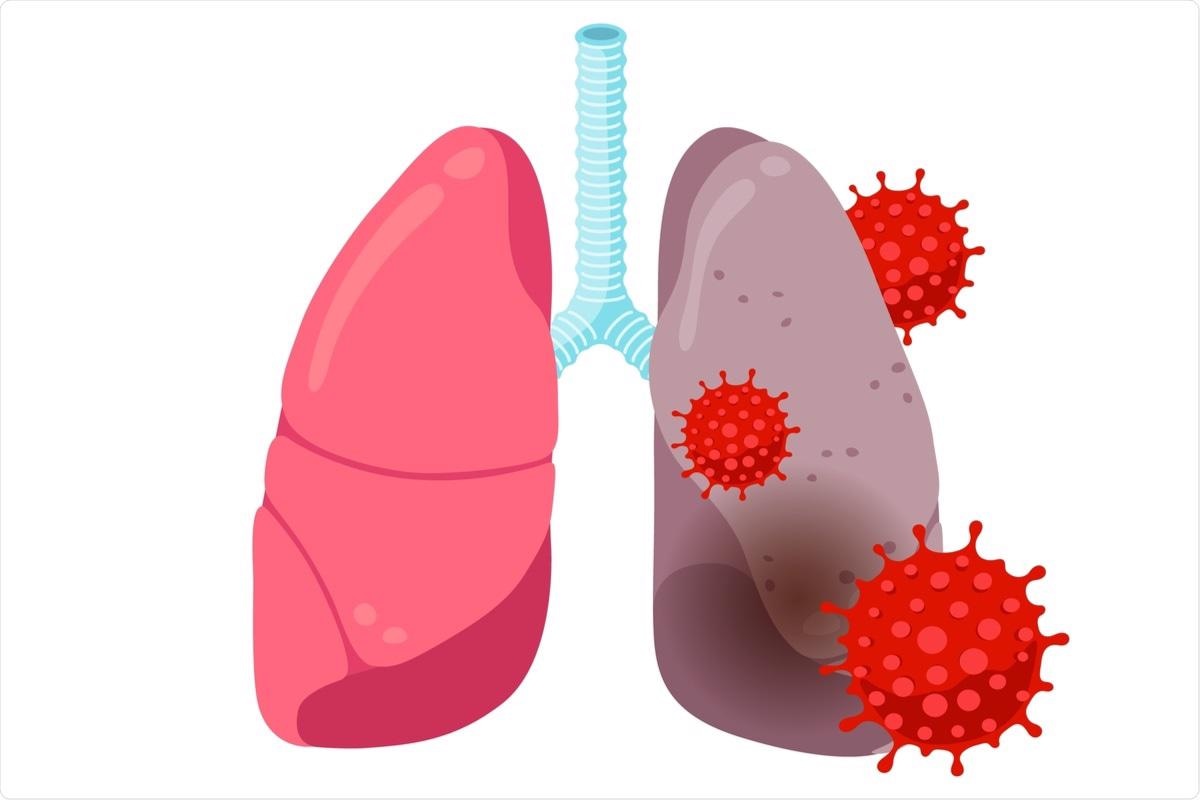 Study:  Inflammation in the COVID-19 Airway Is Due to Inhibition of CFTR Signaling by the SARS-Cov-2 Spike Protein. Image Credit: Azat Valeev / Shutterstock.com

The inflammation of the airways seen in COVID-19 is largely due to the release of cytokines like nuclear factor κB (NF-κB) and epithelial sodium channel (ENaC) ENaC, which activate signaling pathways leading to a cascade of inflammatory chemicals that flood the body. The persistence of tissue damage could be partly to blame for long Covid, while acute inflammation could lead to other complications that increase the odds of death from any cause within a year of the severe episode by two or three times.

The two aforementioned primary cytokines are also found at higher levels in patients with cystic fibrosis, which is known to be the result of inactivating mutations in the CFTR gene. This linkage led researchers to postulate that COVID-19 inflammation of the airway might involve the same type of CFTR inactivation by the spike protein of the virus.

The result would be an illness similar to cystic fibrosis, as has been described in carriers with only one functioning copy of the CFTR gene. CFTR acts by its tonic inhibition of the tumor necrosis factor α (TNF-α)-NF-κB pathway through its engagement with the TNF Associated Death Domain (TRADD) protein.

Interestingly, CF carriers who have one mutated poorly functioning CFTR gene show an inability to produce adequate levels of CFTR to overcome the reduction in these channels due to the other genetically defective allele. As a result, these patients have only half the normal CFTR function and are prone to illnesses that accompany CF like respiratory infections, hepatitis, and pancreatitis. This indicates that CFTR levels cannot drop too much before entering the pathologic zone.

Similarly, in a group of CF carrier adults hospitalized with COVID-19, the chances of acute respiratory distress syndrome (ARDS), hyper-inflammation, and rapid mortality were much higher than in those with two normal CFTR copies, irrespective of age and sex.

In the current study, researchers examined the effects of exposing epithelia to the viral spike protein.

The expression of TRADD, as well as TNF-associated proteins like TNFR1, p-IκBα, and interleukin (IL)-8, was enhanced by increased levels of spike protein exposure, thereby indicating the activation of the inflammatory cascade mediated by TNF-α and NF-κB. Further, the spike protein is known to reduce the activity of CFTR chloride channels to a significant extent, and in a dose-dependent manner, in differentiated epithelial tissue. This spike-induced CFTR function might contribute to the TRADD increase with spike exposure. 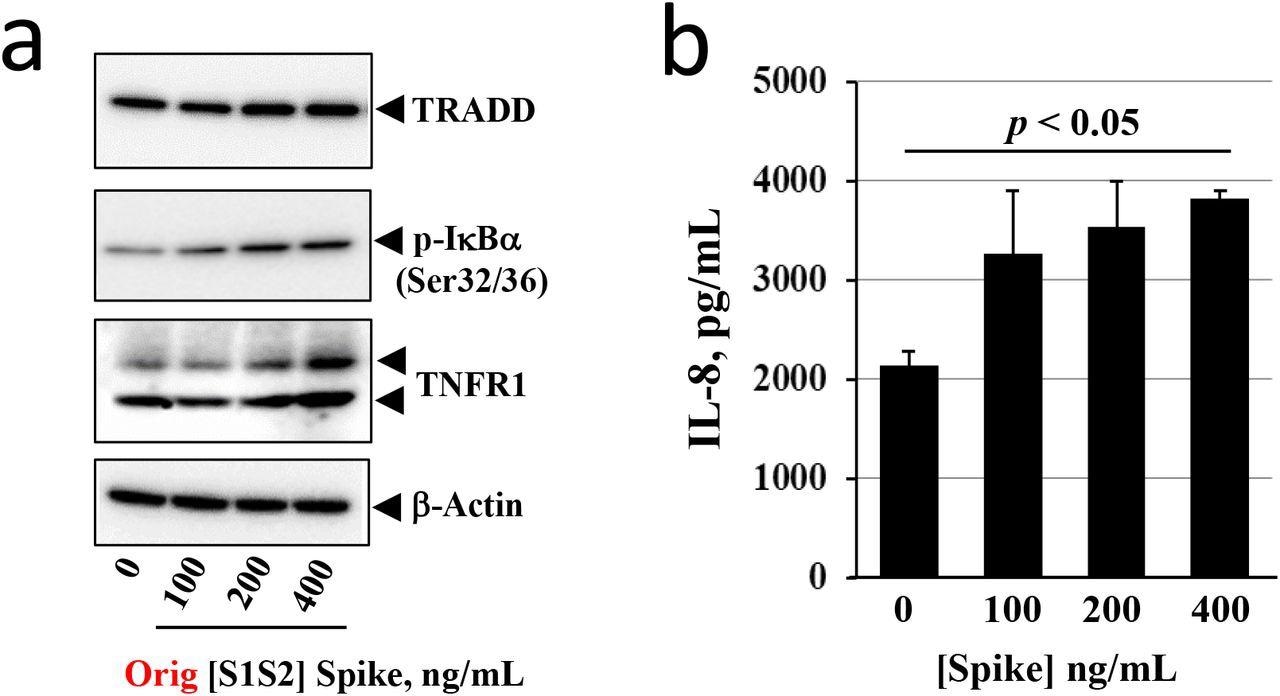 Effects of SARS-CoV-2 [S1S2] Spike on pro-Inflammatory TNFα/NFβB signaling proteins and IL-8 expression in differentiated BCi.NS1.1 (d-BCi) epithelia. The apical surface of the differentiated epithelium was treated with increasing concentrations of Original-[S1S2] Spike protein for 4 hours in submerged conditions, washed and then incubated for an additional 20 hours in ALI conditions. (a). TRADD, TNFR1 and p-IκBα increase in a Spike concentration-dependent manner. (b). IL-8 expression significantly increases as a function of increasing concentration of Spike protein. (N=3 independent experiments; p < 0.05 taken as significantly different from control.

The wild-type SARS-CoV-2 spike used in the earlier part of this experiment was replaced by the SARS-CoV-2 Beta variant spike protein, which led to a 50% reduction in the inhibitory effect of the spike on CFTR activity. This correlates with a similar decrease in binding affinity between the Beta spike and host cell angiotensin-converting enzyme 2 (ACE2) receptor. Thus, spike proteins may bind to the ACE2, initially, which triggers a reduction in CFTR function.

The most potent blocker of spike-mediated CFTR inhibition was ouabain, followed by digitoxin and then digoxin, corresponding to their ability to suppress spike-ACE2 binding.

The researchers also found evidence that ACE2 functions as a physical link between the spike and CFTR in the co-precipitation of both ACE2 and CFTR from differentiated basal cells or epithelia.

The mechanism by which the spike protein inhibits the CFTR gene is through the suppression of endosomal recycling. Through this process, damaged or misfolded CFTR proteins are sent to the lysosomes for recycling. About a third of these unusable CFTR channels are normally destroyed within the lysosome in 10 minutes, with the remainder of proteins returned to the plasma membrane at the apex of the cell.

However, in the presence of the spike protein, a larger proportion of CFTR is lost to the lysosome, with the percentage of recovery falling steadily as the concentration of the wild-type spike protein rises. This means that endosomal recycling is disrupted, such that CFTR at the apical part of the cell is not able to return to the same region, with increasing spike concentrations.

“It is therefore possible that when the spike protein binds to the ACE2:CFTR complex, the bound CFTR may become marked as “damaged ” and thus directed to the lysosome.”

Finally, the spike protein was observed to cause proteolysis-triggered activation of ENaC as a result of the loss of the constitutive inhibition of CFTR along with the activation of sodium conductance. ENaC channels consist of different proteins forming a heterotrimer, including α and γ chains. When exposed to the spike protein, these are cleaved by enzymes such as furin, or the transmembrane protease TMPRSS2, leading to their activation

In other words, even as CFTR loss occurs with spike exposure, active proteolytic fragments of α ENaC and γ ENaC are formed, in addition to the synthesis and activation of the latter.

The results of the current study provide some insight into the mechanisms of inflammation in COVID-19 patients’ airways. The experiment, which was carried out on a small airway epithelium model, revealed the possibility that the viral spike might be responsible for the inhibition of CFTR gene expression. Meanwhile, it appears that the ACE2 receptor acts to conjoin the spike protein with CFTR.

As shown by the failure to detect CFTR from the plasma membrane of cells undergoing endosomal recycling, CFTR is lost from the endosomes. This typically occurs with damaged proteins, thereby indicating that the spike-ACE2 complex damages or destabilizes the CFTR.

Along with activated cytokines, both ENaC and γ ENaC are activated via proteolysis.

“To our knowledge this is the first time COVID-19 airway inflammation has been experimentally traced to a contribution from SARS-CoV-2 Spike-dependent inhibition of CFTR signaling.”

Further research will likely demonstrate how this type of reduction in CFTR expression is correlated with human COVID-19. In CF carriers, apart from the lower expression of CFTR on airway cells, SARS-CoV-2 spike exposure could further reduce CFTR expression and thus drive a poor outcome in COVID-19.

The nanomolar inhibitory concentrations of cardiac glycosides against spike-ACE2 binding were an important indication of potential therapeutic development. These commonly used drugs were found to suppress the infection of the lung cells in culture using wild-type authentic live virus.

Though the drugs used in this study are well-known inotropics, when used in healthy people, they do not cause arrhythmias or premature contraction of the heart. Furthermore, trials have failed to show any adverse effects when cardiac glycosides are used in people with normal hearts. However, their use is limited to patients under medical supervision.

ACE and ACE2 have opposing roles in regulating the activity of ENaC in the lung through the concentration of Angiotensin II (AT2), which is an activator of lung ENaC. Lung EnAC levels are inhibited by CFTR expression and activated in the absence of these channels.

Meanwhile, lung ACE produces AT2, which is the most important activator of the Renin-Angiotensin-Aldosterone System (RAAS). This directly activates or inhibits lung ENaC activity, depending on whether it engages the AT1 or AT2 receptor.

Further, AT2 is inactivated by ACE2 on the lung epithelial cells, which leads to the production of Angiotensin (1-7), an inhibitor of lung ENaC through the AT2 receptor. Taken together, this activity regulates ENaC activation in the lung.

CFTR also plays a role in this process through its chloride transport activity into the airway, wherein it forcies sodium ions to enter the cell through the inactive ENaC channel. The increased sodium and chloride ion concentration draws water into the airway, keeping the airway hydrated. This process is needed for the proper function of the fluid layer just above the plasma membrane of the ciliary cells bearing ENaC, which allows the cilia to propel mucins to the throat for expulsion from the airway.

With poor CFTR function, ENaC is activated, causing excessive sodium absorption and drawing water out of the airway. The thick mucus interferes with mucociliary clearance and inflammation sets in.

Interestingly, both ENaC and spike proteolytic cleavage at the S1/S2 junction are mediated by furin, TMPRSS2, and, perhaps, other serine proteases. In both cases, the result is ENaC activation.

“It has been speculated that the SARS-CoV-2 virus has taken advantage of this existing protease system by evolving a CendR amino acid sequence at the S1S2 junction on the Spike protein that enables the existing TMPRSS2 and FURIN to drive infectivity.”

The SARS-CoV-2 spike protein likely binds to the ACE2-CFTR complex, thus driving CFTR loss and ENaC activation. This is supported by the rescue of CFTR activity from spike-induced loss by cardiac glycosides, as these competitively inhibit spike-ACE2 binding. Similar CFTR loss of function is driven by acrolein in tobacco smoke, as observed in chronic obstructive pulmonary disease (COPD) and by the flu virus strain A/Udorn.

The inflammation of the airways in COVID-19 is therefore predicted to be the result of increased levels of pro-inflammatory TNF-α and NF-κB, as well as ENaC activation. These effects are likely due to the loss of CFTR signaling induced by the binding of the spike protein to the ACE2-CFTR complex.

In a study posted to the preprint server Research Square*, researchers conducted a retrospective cohort analysis by reviewing medical...

In a recent study posted to the medRxiv* preprint server, researchers utilized data from the recent rounds of the REal-time...

Reanalysis of the efficacy of COVID-19 vaccines

A new study, posted to the medRxiv* preprint server, investigates the impact of a trial study design and other parameters...

The evolution of severe acute respiratory syndrome coronavirus-2 (SARS-CoV-2), due to genomic mutations, has led to the emergence of several...

Characterization of the severity of Omicron relative to Delta in England

In a recent study posted to Preprints with The Lancet*, researchers assessed the relative risks of hospitalization and death...