T cells are produced and released from the thymus as naive T cells (TN). Following infection or antigen exposure, TN cells proliferate and differentiate into effector T cells (TE), which travel to infected target cells and destroy them, thus clearing the infection.

After the infection has been addressed, the majority of the TE die, but a small percentage of them develop into long-lived resting-state memory T cells (TM). These TM cells accumulate over time and can provide lifelong protection against a variety of diseases and pathogens.1

T cells’ effector function increases as they transition from TN to memory and effector cells, while their ability to self-renew (proliferate) decreases.2

In patients with relapsed/refractory cancer, adoptive therapy with ex vivo expanded antigen-specific T cells, with or without genetic modification, can stimulate remissions. The therapy’s success depends on the effective expansion of T cells ex vivo and their persistence, homing and cytotoxicity after administration to the patient.3

T cells from cancer patients are more differentiated and difficult to expand than T cells from healthy donors. The biodistribution and long-term persistence of TSCM and TCM are attractive targets for overcoming the current limitations of cancer adoptive therapy.

Ex vivo expansion protocols are being studied in the hopes of increasing the clinical efficiency of genetically modified cells used in adoptive cell therapy by generating and maintaining less differentiated subset phenotypes.4,5,6

One key challenge is that a patient’s T cells may be permanently damaged as a result of disease or prior treatment. Due to the absence of ex vivo expansion potential, not all patients with the disease are candidates for adoptive cell therapy. This suggests that to effectively treat cancers, individualized T cell subset profiling and personalized immunotherapy are required.7

The simultaneous measurement of T cell phenotypes and secreted functional cytokines is enabled by multiplexing cells and beads in each assay well, a workflow that was previously accomplished on two separate instruments.

The assay is designed to work with the iQue® platform, which not only offers quick sample acquisition (5 minutes per 96-well plate) but also includes advanced immune screening and profiling algorithms like profiling maps and multi-plate analysis. These tools, when used together, allow data to be quickly transformed into actionable results.

The iQue® Human T Cell Memory Kit can be used to easily determine T cell culture conditions, like media supplemented with cytokines IFNß or IL-21, that could increase the frequency of less differentiated T memory cells like TCM and TSCM.

These findings suggest that when combined with the iQue® platform and integrated Forecyt® software, the iQue® Human T Cell Memory Kit could provide a reliable solution for the characterization of T memory cells and ex vivo expanded T cell products for adoptive T cell therapy.

Live immune cells are distinguished from dead cells in each assay well as they are stained with a fluorescent membrane integrity dye. Only dead cells and those with a compromised membrane allow the dye to enter, staining nucleic DNA via intercalation. 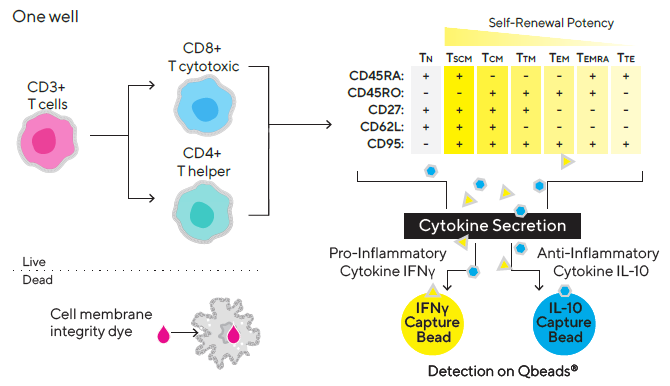 Three healthy donors’ PBMCs were recovered overnight in X-VIVO15 media containing 5% human AB sera (referred to as media hereon). On Day 0, each donor’s cells were counted and the cell density was set to 4 million/mL (4X).

Cells were plated at a density of 25 μL/well into the wells of a 96-well v-bottom plate (Cat. No. 10149). Before use, CD3/CD28 Dynabeads® were washed once with media. The beads and wash media were then placed for a minimum of 1 minute on a DynamagTM magnet (ThermoFisher Scientific).

The beads were then resuspended in fresh media at a density of 0.8 million/mL after the wash media was removed (4X). Dynabeads® (25 μL/well) were added to the assigned wells in the culture plate. Around 14 different cytokine cocktail combinations were prepared at (2X) in media.

The final cytokine concentrations in culture wells were: IL-7 and IL-15, 10 ng/mL; IL-4, IL-6, IL-21, and IFNß, 100 ng/mL. Figure 2 reveals the 14 cytokine combinations (Treatments 3–16). Treatment 1 is negative control (media and cells only) and Treatment 2 is cells only activated with Dynabeads® (no supplemented cytokines).

To enable T cell population expansion with minimal edge effect, the prepared culture plate was kept in a high humidity chamber in a 37 °C incubator with 5% CO2 for up to eight days.

Culture samples were manually mixed by up-and-down pipetting on days 2, 5 and 8 post-treatment to guarantee cell resuspension, and 10 μL of the sample comprising cells and supernatant were passed from the culture plate to an assay plate (Cat. No. 10149).

The iQue® Human T Cell Memory Kit was used to analyze the samples, as shown in Figure 3. The assay took about 3 hours in total, with 30 minutes of hands-on time each day. The iQue® was used to collect data, with a total acquisition time of about 25 minutes per 96-well plate.

Data from each donor was normalized against samples from the same donor treated with only CD3/CD28 Dynabeads® and expressed as the fold increase using the sophisticated metric tool in Forecyt® to evaluate the effect of the cytokine treatment.

On every assay day, a distinct plate with two rows of cytokine standards was used to create standard curves for cross-plate quantitation of IFN and IL-10 in the screening plate employing Forecyt® using the iQue® Human T Cell Memory Kit.

The assay template included with the iQue® Human T Cell Memory Kit was used to collect samples on the iQue®. Due to the kit’s antibody panel design, the violet, blue and red (VBR) laser configuration is required. 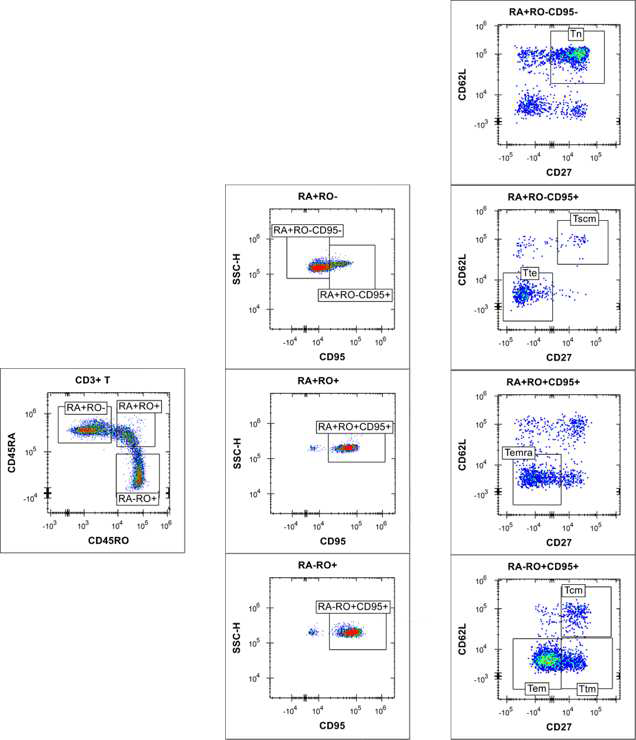 Without the need for single stain compensation, the template contains validated compensation metrics that apply instantaneously to the data analysis. All populations were differentiated at the plate level, not at the well level, for the gating strategy.

The scatter plot was used to separate the cells and beads due to differences in size and granularity. Based on bead intrinsic fluorescence in the RL1 and RL2 channels of the iQue®, the two different cytokine capture beads (IFN γ and IL-10) were separated.

RL1 is also involved in cell detection via CD95, but it has no effect on bead classification. 2D plots with varied CD markers/viability staining signals were used to separate cells. In CD3+ T cell populations, distinct T naïve/memory/effector cell subsets have been identified (Figures 4 and 5). Boolean logic gates were used to recognize each corresponding CD4+ and CD8+ T naïve | memory | effector cell subset (data not shown).

Standard curves to quantify the amount of secreted IFNγ and IL-10 were created using a 4-parameter curve fit with 1/Y2 weighting, and the linear range (represented by bold lines in Figure 6) for each standard curve was evaluated using Forecyt®. 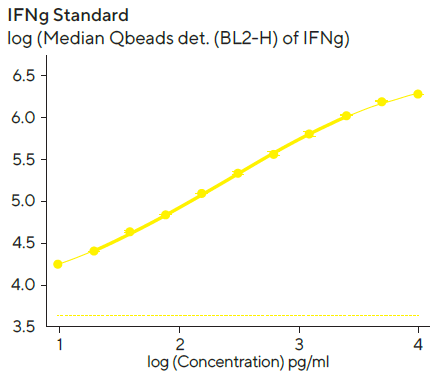 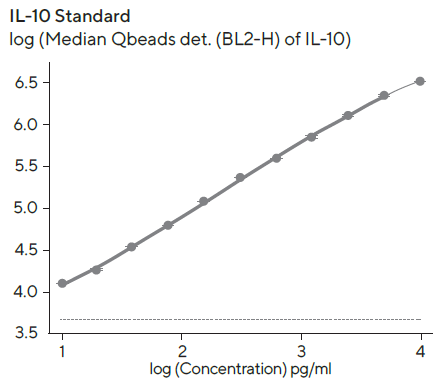 Standard curves were created with the kits provided standard and 1:2 serial titration with a top concentration of 10,000 pg/mL per standard protein. The linear ranges for standards were as follows: IL-10, 10–6, 400 pg/mL; IFN, 10–2, 100 pg/mL. The detection ranges were larger than the linear range, and the dashed line denotes the fluorescent background at zero standard concentration.

Forecyt® was used to evaluate the T cell expansion time course data and create series graphs from the POC studies for each donor. TCM or TSCM frequency was increased in culture media supplemented with cytokine cocktails containing IFNß or IL-21 cytokine, respectively. 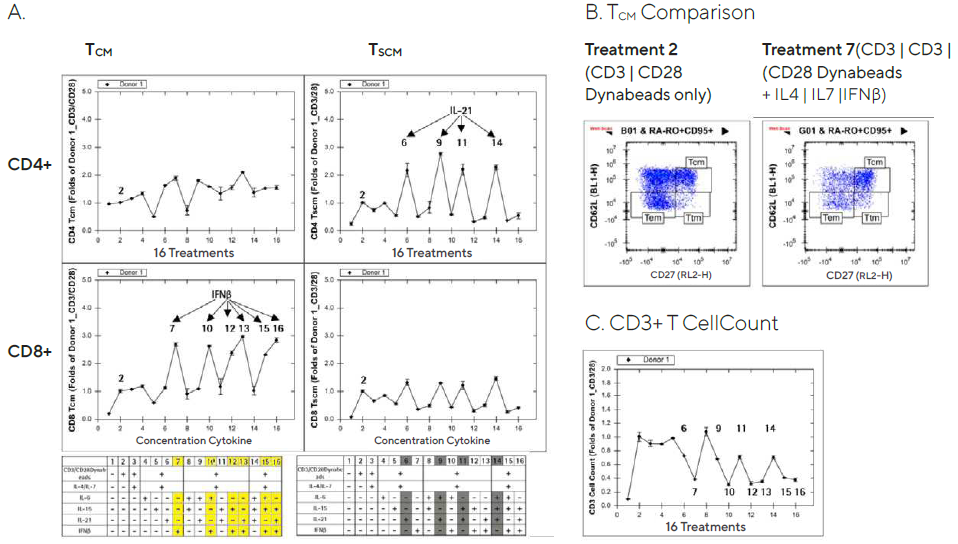 In addition, CD3+ T cell counts in culture supplemented with cytokine cocktails containing IFNß decelerated cell proliferation by about 50%. (Figure 7C). TCM and TSCM cell frequencies were only mildly affected by the treatments on Day 2 post-treatment, in the same direction as on Day 5, and Day 8 produced similar results (data not shown).

The Forecyt® software was used to determine the temporal analysis of IL-10 and IFN secretion. Donor 1’s results are shown in Figure 8. The results were expressed as a fold increase over the control wells with only CD3/CD28 Dynabeads® treatment. 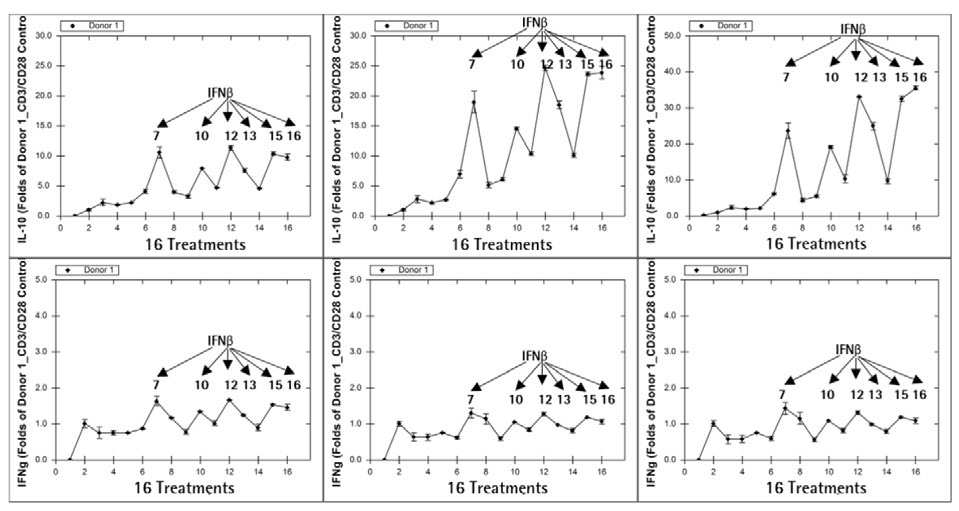 From Day 2 to Day 8, six cytokine cocktails comprising IFNß in the culture enhanced both IL-10 and IFN secretion. The IL-10 secretion pattern was strikingly similar to the CD8 TCM frequency pattern (Figure 7A).

Additional findings from the POC screening studies indicate that CD8+ T memory cell frequencies vary from donor to donor, which is unsurprising given that not all patients are expected to be candidates for adoptive T cell therapy. As an example, the results from Day 5 are shown (Figure 9). 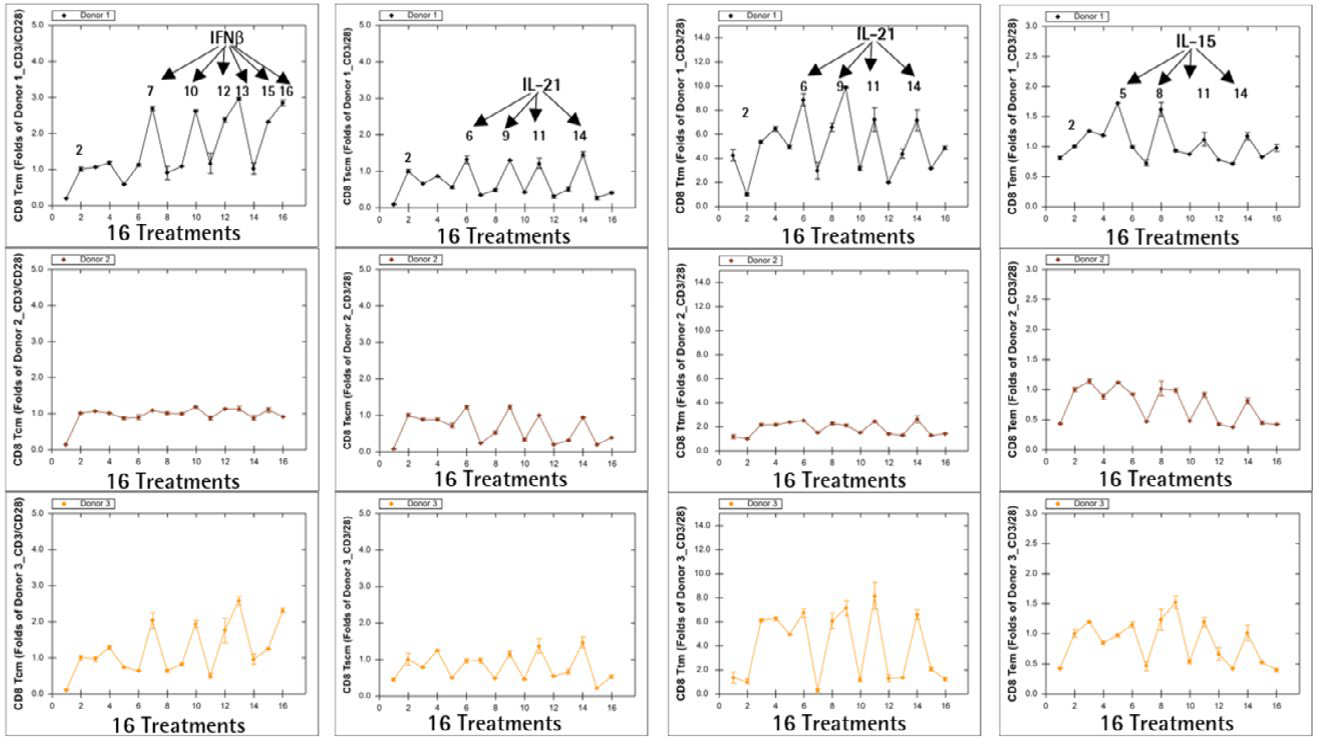 All media combinations, on the other hand, had only a minor or no effect on the frequency of T cell memory subsets in Donor 2, implying that donor sensitivities to various cytokine treatments in ex vivo T cell expansion are donor-dependent.

This application note shows how to use the iQue® Human T Cell Memory Kit’s simple assay and analysis workflow with a screening model that, regardless of the complexity of T cell biology, can be beneficial for adoptive T cell therapy workflows. By combining cells and beads and multiplexing measurements in each assay well, the kit is designed to be simple to use. It has the following distinct advantages:

Recently, there has been a considerable increase in the advancement of the ‘ingestible beauty’ trend. However, a more common and...