The sudden worldwide outbreak of the severe acute respiratory syndrome coronavirus 2 (SARS-CoV-2) resulted in the current coronavirus disease 2019 (COVID-19) pandemic. Since its emergence, researchers have characterized SARS-CoV-2 and developed vaccines and therapeutics to contain the pandemic. To date, all available COVID-19 vaccines and therapeutics have been developed against the wild-type SARS-CoV-2 spike (S) protein, which harbors the greatest among mutations in newly emerging SARS-CoV-2 variants.

In addition to the spike protein, SARS-CoV-2 encodes multiple accessory proteins, among which the open reading frame 8 (ORF8) is rapidly evolving. Furthermore, deletion of the SARS-CoV-2 ORF8 has been associated with milder disease. 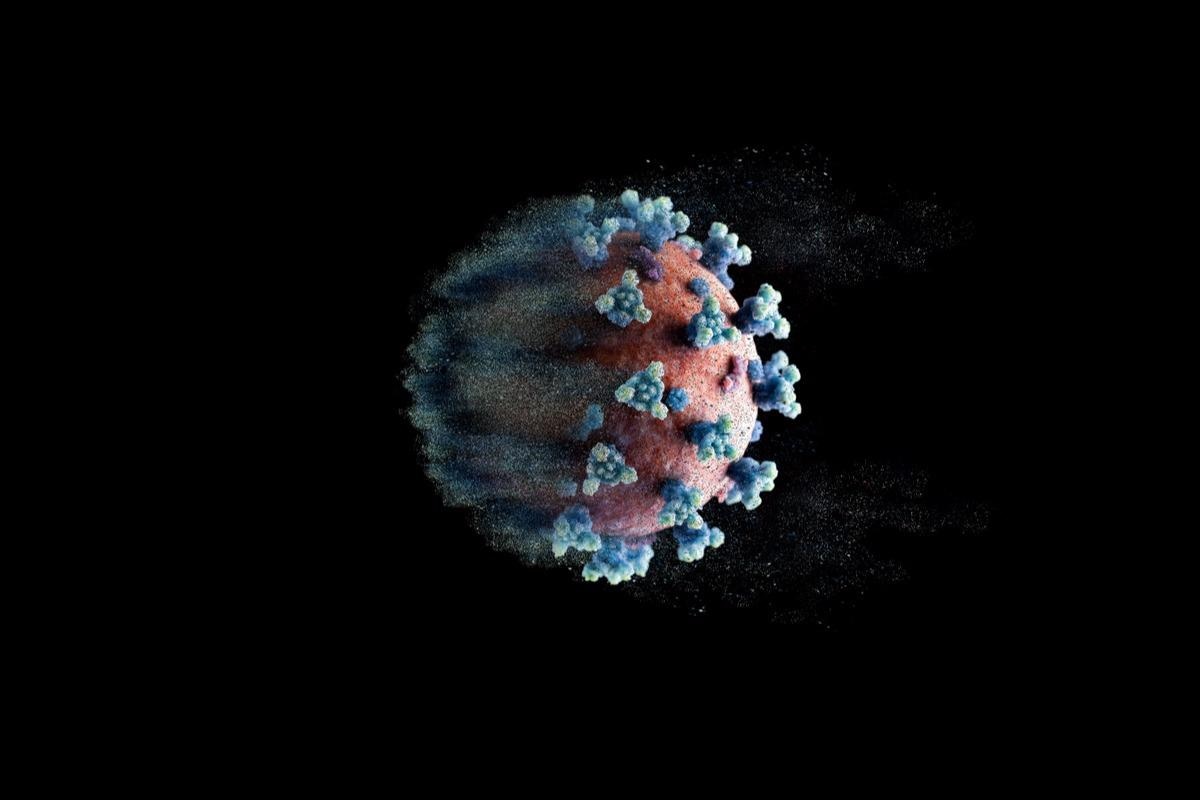 The SARS-CoV-2 genome codes for 26 proteins, including (ORF8), which play essential roles in viral replication and pathogenesis. ORF8 has been linked to immune evasion capabilities of the virus by directly interacting with major histocompatibility complex class I (MHC-I) molecules.

A recent study has shown that the detection of ORF8 in the plasma of acutely-infected individuals is negatively associated with survival. However, the role of ORF8 in inducing the cytokine storm remains to be established.

In the current study, the researchers evaluated whether ORF8 could interact with different cell types present in PBMCs. To this effect, they conjugated recombinant ORF8 with FITC, which was then incubated on ice with PBMCs for 30 minutes.

The ORF8 bound 10% of cells in PBMCs, which included CD14+CD16+ monocytes, as well as CD56+CD16+ natural killer (NK) cells. Upon investigating whether ORF8 could directly interact with CD16a, the scientists observed that ORF8 bound CD16a with an affinity of 38.9 nM.

CD16 interacts with the Fc portion of immunoglobulin G (IgG) and, upon binding a substantial quantity of antibodies, are activated and can subsequently mediate ADCC. Thus, the researchers were interested in determining whether the SARS-CoV-2 ORF8 could modulate this response. 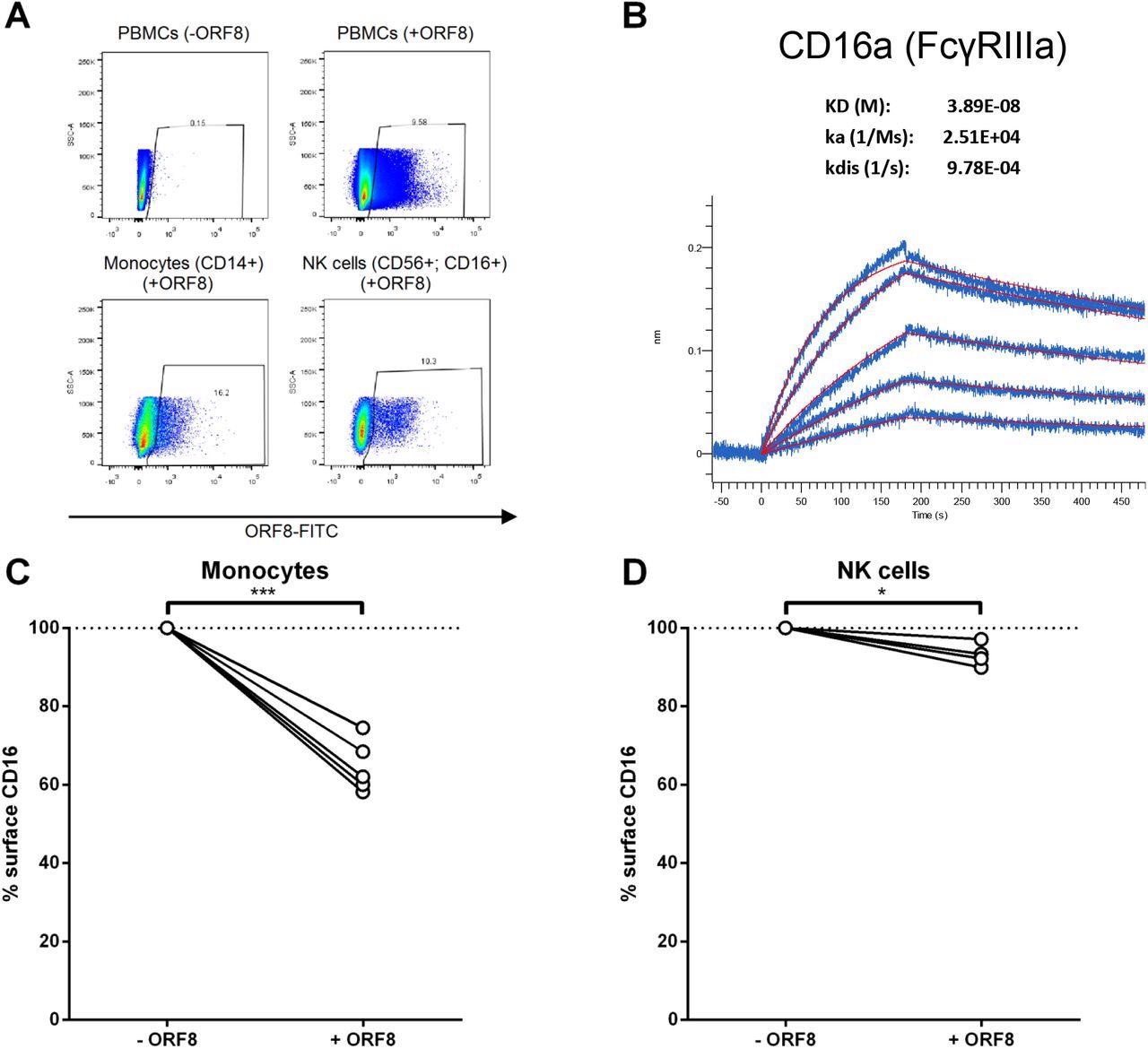 ORF8 binds monocytes and NK cells through CD16a. (A) PMBCs were incubated with FITC-conjugated recombinant ORF8 protein on ice for 30 min, followed by staining with anti-CD14-V450, and anti-CD16-PE-CY7 and anti-CD56-PE antibodies before being fixed with 4% PFA and analyzed with flow cytometer. (B) AR2G biosensors loaded with CD16a protein were soaked in two-fold dilution series of ORF8 (31.25 nM – 500 nM). Raw data are shown in blue and model in red. The affinity constant (KD), on rate (Ka) and off rates (Kdis) were calculated using a 1:1 binding model. (C, D) PBMCs from different donors were thawed and incubated for 16 hours with ORF8. The following day, the PBMCs were stained with anti-CD3, anti-CD14, anti-CD56, anti-CD16 and LIVE/DEAD Fixable Aqua Dead Cell Stain and analyzed by flow cytometry to measure surface levels of CD16 on (C) monocytes (n=5) and (D) NK cells (n=4). Cell-surface CD16 levels in presence of ORF8 were normalized on cell-surface CD16 detected in absence of ORF8. Statistical significance was evaluated using a parametric paired t-test.

To this end, the researchers evaluated whether ORF8 was able to modulate CD16 levels at the surface of monocytes and NK cells. Upon treatment with ORF8, the level of CD16 on monocytes present within the PBMC population was significantly reduced. In the case of NK cells, a notable reduction was also observed.

The researchers then studied if the decline in CD16 levels affected ADCC responses with an in vitro assay using PBMCs as effector cells. In culture media, soluble ORF8 was produced by transfecting HEK293T cells with ORF8 DNA.

The scientists noted ORF8 secretion and supernatant accumulation, which was in line with results reported in previous research. Consistent with the previous finding of ORF8-mediated CD16 downregulation, ADCC responses mediated by plasma from convalescent and vaccinated individuals were significantly reduced by ORF8.

ORF8-treated monocytes were used to evaluate the contribution of monocytes in these results. In line with previous findings, a significant decline in monocyte-mediated ADCC responses was observed.

An important finding was that the decline in CD16 levels and ADCC responses, following the addition of ORF8 to total PBMCs or purified monocytes, was similar. This suggests that the impact of ORF8 on PBMCs is mostly dependent on monocytes.

In response to the antibodies produced by vaccination and previous infection, several new variants of SARS-CoV-2 continue to emerge. The apparition of multiple mutations in the spike protein is a common feature among these variants, many o which are responsible for causing immune evasion and increased transmissibility.

Mutations have also been observed in ORF8; however, their effect on immune evasion remains to be determined. The results presented in the current study suggest that novel SARS-CoV-2 variants could be using ORF8 to evade Fc-effector functions by primarily impairing monocytes to mediate ADCC.

Communication is the key for cooperative hunting in wild chimpanzees