The severe acute respiratory syndrome coronavirus 2 (SARS-CoV-2) readily transmits in close contact through respiratory droplets. The nasal cavity is the primary site of viral entry; thus, SARS-CoV-2 infection of the upper airway is an essential factor in the pathogenesis of coronavirus disease 2019 (COVID-19).

In a recent study published on the bioRxiv* preprint server, researchers assess changes in the respiratory and olfactory epithelium of the nasal mucosa in SARS-CoV-2 infections by the WA1, Delta, and Omicron strains. 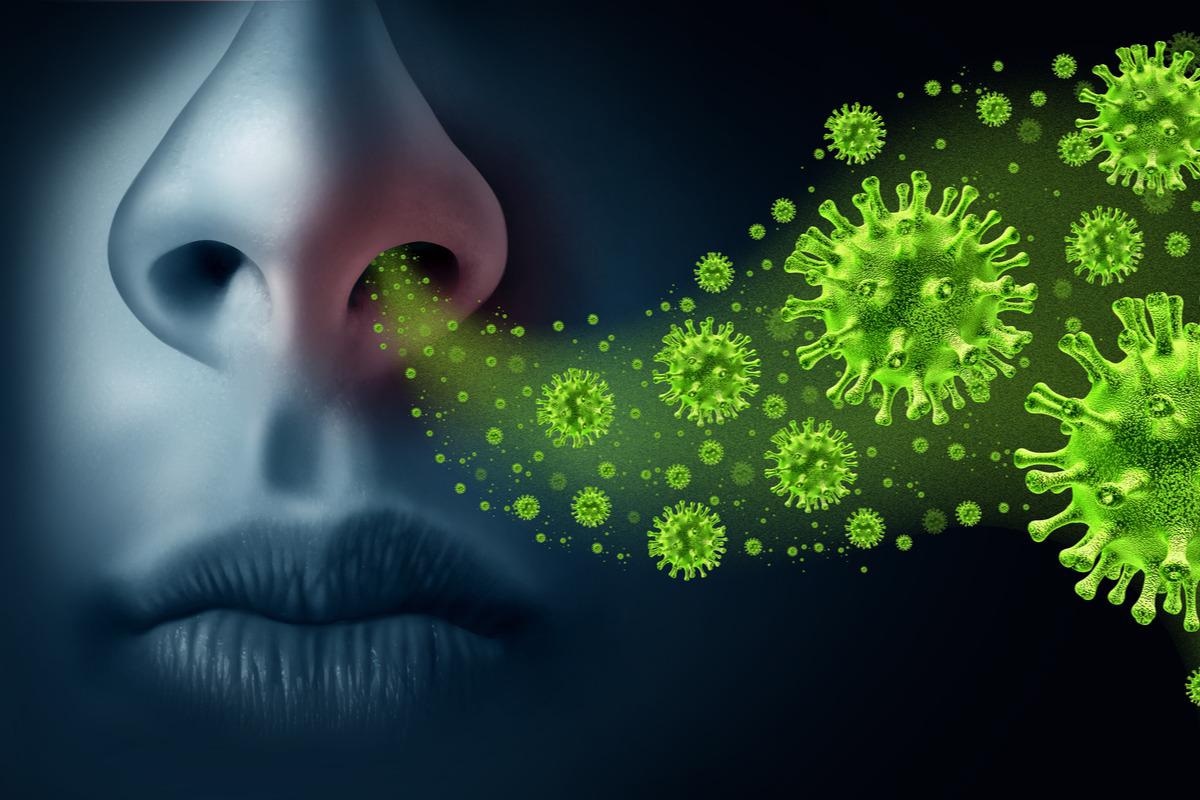 In the present study, researchers evaluated changes in the olfactory and nasal epithelial epithelium in infections caused by the SARS-CoV-2 variants.

To assess the cellular tropism in the nasal mucosa, WA1 strain infections in vitro were performed using human nasal tissues, which were discarded post skull base and endonasal sinus surgeries. The antibodies were screened to visualize the nucleocapsid (NP) or spike (S) proteins in seven COVID-19 tissue explants.

Antibodies were also immunostained and SARS-CoV-2 ribonucleic acid (RNA) was detected using an RNAscope. The neuronal marker Tuj1 was used for verifying the changes in the olfactory epithelium, which was stained with viral NP, and NP+ cells were counted.

After establishing the high tropism of Delta and WA1 in olfactory mucosae, WA1 and Delta infections in olfactory neurons were assessed. For this, SARS-CoV-2 was intranasally inoculated into young and adult hamsters and uniform SARS-CoV-2 infections were generated in C57BL/6J mice using the mouse-adapted SARS-CoV-2 (maSARS) model to evaluate age-wise variations.

In the WA1-positive human samples of young persons under the age of 30 years, the viral load in Tuj1+ neurons and axon bundles was remarkably increased.  WA1 infection of the olfactory neurons and olfactory bulb transport through axons was also profound in young individuals.

Delta infection demonstrated a greater submucosal invasion capacity, while the SARS-CoV-2 Omicron variant demonstrated greater retention in the sinonasal epithelial cells. In contrast to the WA1 or Delta strain, Omicron-infected olfactory epithelium significantly reduced to 6.7%, which was indicative of lower Omicron pathogenicity.

Pronounced NP+ sinonasal cells at a concentration of 3.3 positive cells/mm of epithelium were detected in Omicron hamsters, thus indicating a longer duration of Omicron infections. Omicron-infected NP+ cells in the sinus and nasal mucosa increased by seven- to ten-fold as compared to WA1 or Delta, thus indicating a transitional shift in tropism from the olfactory epithelium to respiratory epithelium with viral evolution.

At four days post-infection (dpi) in hamsters, viral inoculation induced extensive shedding of NP+ cells into the nasal lumen, thus indicating viral clearance by macrophages. In addition, widespread distribution of Iba1+ macrophages was detected in the olfactory mucosa, of which 72% were also NP+.

At six dpi, 48% of CD45+ cells in the olfactory mucosa were Iba1+ macrophages, 3.7-times higher in the nasal lumen in older individuals as compared to young ones, which was indicative of delayed viral clearance in older COVID-19 patients. In the single-cell RNA sequencing (scRNA-seq) dataset analysis, a significant reduction in phagocytosis-related genes such as Clec4n (Dectin2), Fpr2, Cd9, and Fabp5 was observed in old macrophages as compared to young mice. This indicated that macrophages are essential for immune defenses and their decreased capacity for viral clearance could prolong SARS-CoV-2 retention in olfactory mucosae of the older COVID-19 patients.

A 100- to 300-fold increase in NP+ cells was observed in the Tuj1+ olfactory epithelium as compared to the Tuj1-negative respiratory epithelia. Most NP+ cells showed co-localization with Krt18+ sustentacular (olfactory) cells.

Corresponding structural deterioration was observed in olfactory mucosa (high viral load) but not in respiratory epithelium (low viral load). These findings were indicative of the olfactory-specific WA1 tropism, which is responsible for anosmia in COVID-19 patients. 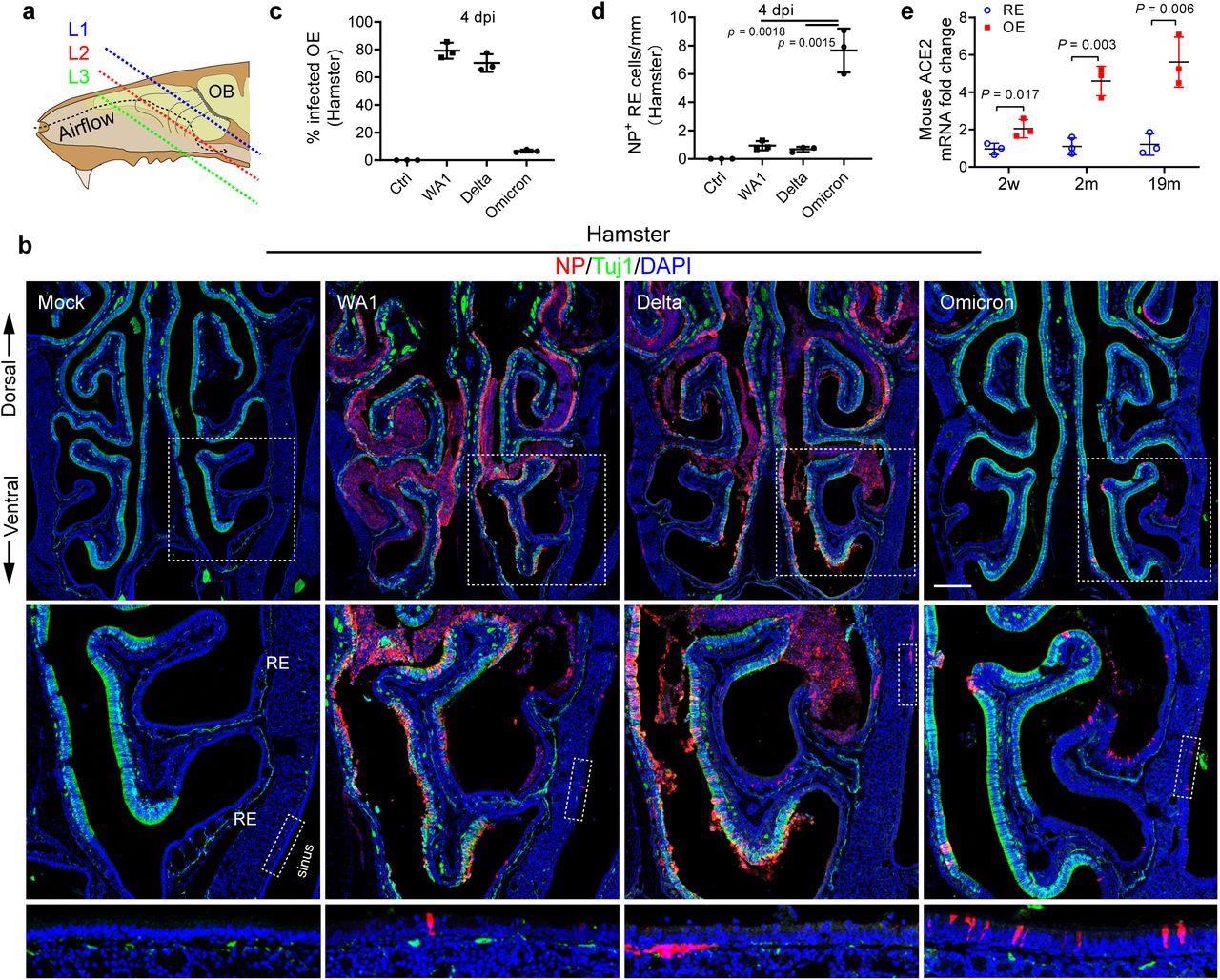 The brain is the most complex organ in our body – constantly absorbing and interpreting our surroundings, and guiding our...

The coronavirus disease 19 (COVID-19) pandemic, which was caused by the emergence of the severe acute respiratory syndrome coronavirus 2...

A new study published on the preprint server bioRxiv* reports the identification of a cluster of monkeypox virus A.2 lineage genomes...

Two years ago, University of Alabama at Birmingham researchers and colleagues reported that reductive stress -; an imbalance in the...