The severe acute respiratory syndrome coronavirus 2 (SARS-CoV-2) continues to be transmitted throughout the world following its initial identification in Wuhan, China, at the end of December 2019. Despite the development of vaccines against SARS-CoV-2, several new variants with escape mutations have emerged that are capable of resisting neutralization by antibodies elicited by infection with previous variants.

A new study under review at the Nature Portfolio journal and currently posted to the Research Square* preprint server explores the mutational profiles of individuals infected with SARS-CoV-2, including those infected with different viral lineages and those who experienced breakthrough infections (BTIs) following receipt of different coronavirus disease 2019 (COVID-19) vaccines. 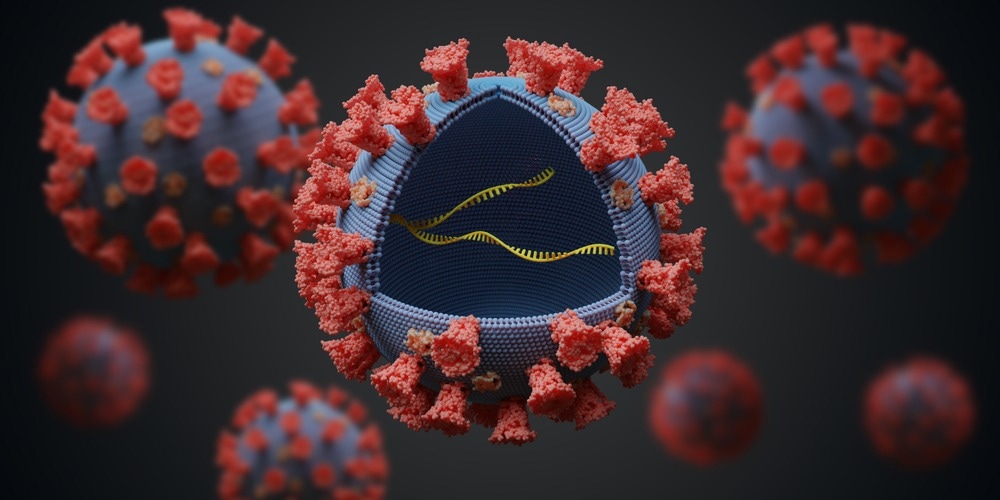 Even as most nations have experienced one or more waves of SARS-CoV-2 infection, new variants continue to arise and cause new COVID-19 waves. Many of these SARS-CoV-2 variants possess mutations in the spike protein that help them to evade host immunity, whether acquired by natural infection, vaccination, or both.

The current study reports the effects of vaccination on viral adaptive mutations. These types of mutations arise as a result of errors in viral genome replication or because of damage to or editing of the viral ribonucleic acid (RNA). These mutations may become fixed, either by genetic drift, a stochastic process, or natural selection.

Prior research indicates that comparatively few virions are transmitted between hosts. This limits the number of virions carrying any low-frequency mutation that can infect a secondary host and restricts the utility of intrahost single nucleotide variants (iSNVs) in contact tracing. Nevertheless, iSNVs can be used to help understand how such mutations arise within a host due to various selection pressures.

Prolonged SARS-CoV-2 infection, which has been documented in immunocompromised hosts, allows viral mutants to arise more rapidly and encourage such mutations to become fixed.

The data for the current study was acquired from global genomic surveillance of SARS-CoV-2. To this end, the researchers examined over 2,000 sequenced genomic samples from Hong Kong from mid-2020 until early 2021.

The researchers also explored the Alpha, Delta, Omicron, as well as other SARS-CoV-2 variants that were not designated as variants of concern (VOCs), as well as BTIs after vaccination with either the Pfizer/BioNTech messenger ribonucleic acid (mRNA) vaccine or CoronaVac vaccines.

Taken together, over 2,700 iSNVs were identified, over 60% of which were non-synonymous from over 50% of the samples. Thus, the average rate of occurrence was 1.33 per sample.

These mutations occurred at over 2,000 sites; however, almost 90% of these sites were found in a single sample. Thus, most of these mutations are sporadic rather than repetitive, which would be expected to occur at specific hotspots. Notably, most iSNVs occurred in the ORF7a and ORF8 genes.

In general, samples with a higher viral load had fewer iSNVs; however, there was no correlation between the time since symptom onset or the frequency of minor alleles. In fact, with samples that had a cycle threshold (Ct) of 25 or less, the number of iSNVs had no significant correlation with the Ct.

RNA editing/damage-associated changes were observed and may be the result of an overabundance of reactive oxygen species (ROS).

Five iSNVs belonging to different lineages were shared among different patients after receipt of different vaccines. This suggests mutation homoplasy rather than the transmission of the same strain.

The iSNV incidence correlated to the breadth of the mutational site count per sample. The greater the number of iSNVs, the greater the intensity of the mutation spectrum, which is defined as the frequency of mutations found at each site in the sample. Nucleotide diversity was also assessed.

With samples containing VOCs from unvaccinated people, the incidence of intrahost mutations was higher than for non-VOC samples. This suggests that the genetic composition of SARS-CoV-2 influences the mutation rate within the host.

Purifying selection pressures appear to impact intrahost mutations of SARS-CoV-2. These may arise due to RNA damage or editing, perhaps because of ROS-enriched environments.

The impact of vaccination

Vaccination appears to increase the purifying selection of iSNVs within the host for VOCs but not non-VOCs. Following receipt of the Comirnaty vaccine, the intrahost mutation rate and nucleotide diversity are enhanced at both the full-genome and spike gene levels, though it contains only the spike gene. This could be due to its increased suppression of viral replication.

The higher iSNV incidence in BTI samples following a primary vaccination is observed for the Delta VOC but not Omicron. While this might be due to a longer time lapse between the second dose of the vaccine and sampling date in Omicron patients, it could also be the result of increased neutralizing antibody titers against Delta as compared to Omicron.

The abundance was similar across all Delta samples and was irrespective of vaccination status. Nucleotide diversity was not markedly higher, thereby suggesting that the genes in these samples did not show an increased rate of mutation as a result of vaccination.

The purifying selection was higher at the full-genome level after Comirnaty vaccination in Delta and Omicron BTIs and was predominantly due to non-synonymous mutations. For the spike gene, no positive selection pressure was observed in these samples; however, the purifying selection was higher. That is, Comirnaty vaccination could increase synonymous nucleotide diversity in most regions of the genome, including ORF1ab, ORF7a, and the envelope (E) protein.

CoronaVac vaccination was associated with purifying selection at the spike gene level only, perhaps because it is less immunogenic.

Within-host mutations were not impacted by selection pressure due to immune factors. Furthermore, these types of mutations did not overlap with known escape mutations on neutralizing epitopes on the spike gene or T-cell receptor epitopes. In one sample, a mutation in the N-terminal domain (NTD) overlapped with the superantigenic site; however, this mutation was not observed at any other locations.

The study findings corroborate those previously reported describing a low incidence of iSNVs in samples obtained from COVID-19 patients. The viral load in each sample is negatively correlated with the rate of intrahost mutations, which would indicate a false bias towards high iSNV rates when the viral load is very low. To avoid this, a Ct threshold of 25 or less is optimal.

The intrahost mutation rate depends partly on the viral genome, with VOCs showing higher rates and nucleotide diversity because of their greater ability to harbor fitness-enhancing sequence changes. This is substantiated by their increased transmissibility and emergence of multiple sub-variants.

VOC mutations do not appear to develop convergently, with such mutations being observed at baseline level only in non-VOC samples. Only three mutations in vaccinated samples overlapped with escape mutation sites on the spike protein with low T-cell pressure.

Thus, the pressures induced by vaccination may not favor escape variants. Conversely, vaccination may prevent the emergence of variants by limiting the space for protein sequence changes, as demonstrated by the apparent limitation of synonymous nucleotide diversity. The effects of hybrid immunity need to be addressed in future research.

In a recent study published in the journal Nature as an early release unedited manuscript, researchers conducted whole genomic sequencing...

Canopy Biosciences, a Bruker Company, today announced the commercial launch of the CellScapeᵀᴹ system, the next generation in ChipCytometryᵀᴹ instrumentation,...

A team of researchers from the IIT-Istituto Italiano di Tecnologia (Italian Institute of Technology) has designed in silico "molecular probes"...

All safe for dialysis patients

On dialysis for kidney failure and assume swimming or sit ups are out of the question? Think again. New international...

CABI scientists have led new research which highlights the safety of a classical biological control agent against the devastating invasive...

Biologists from ETH Zurich have discovered speargun-​like molecular injection systems in two types of bacteria and have described their structure...

Can evolutionary principles lead to new treatments or vaccines for monkeypox?