In a recent study published on the preprint server bioRxiv*, a team of researchers conducted a computational analysis of the furin cleavage domain (FCD) of severe acute respiratory syndrome coronavirus 2 (SARS-CoV-2) and its variants, as well as several other viruses. 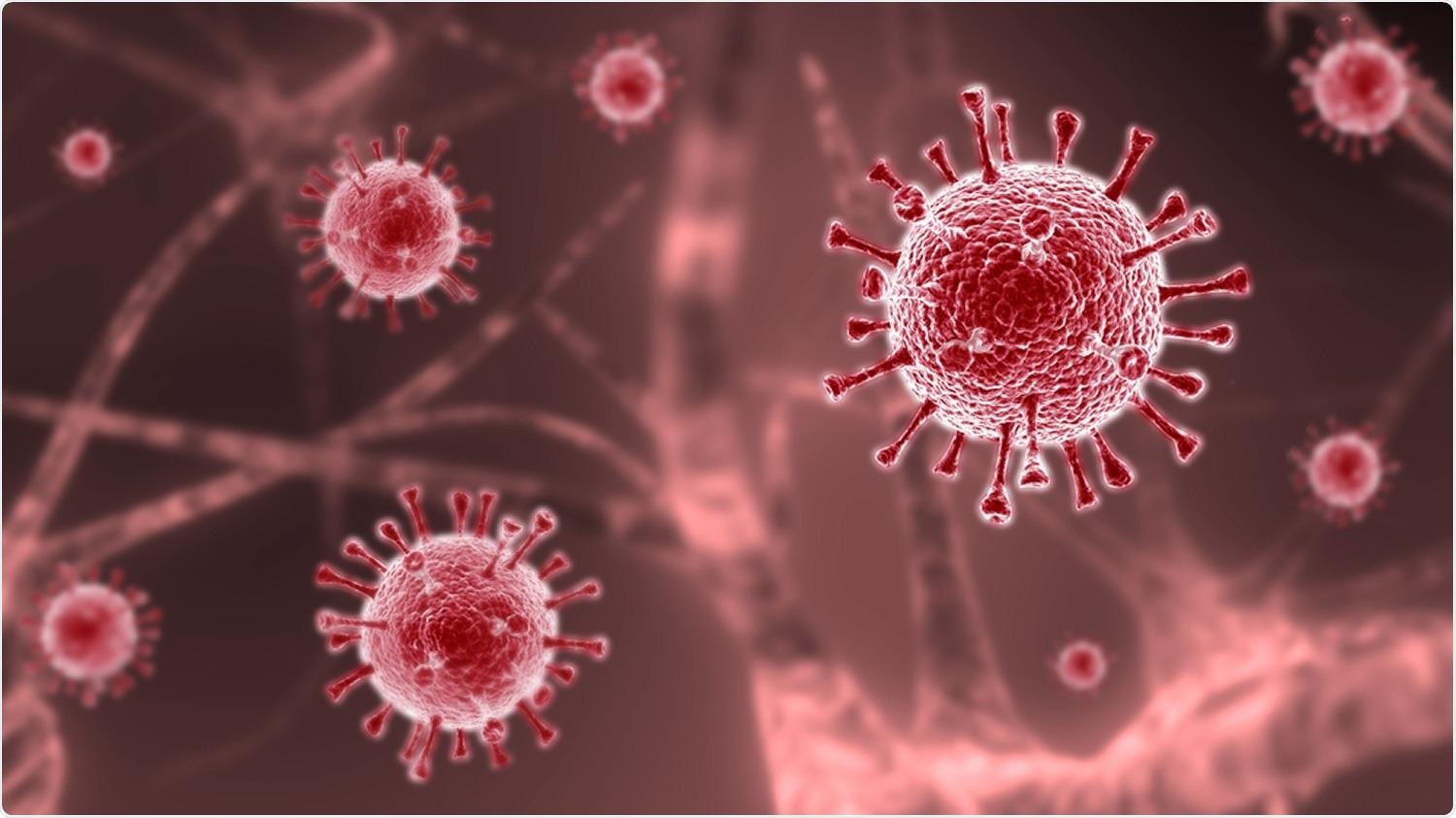 A polybasic insertion mutation at the P681 amino acid position in the spike (S) protein of SARS-CoV-2 is largely responsible for its high transmissibility compared to SARS-CoV-1. Similarly, P681H mutations in the Alpha and Omicron variants, as well as the P681R mutations in the Delta variant, are responsible for their increased transmissibility s compared to the wild-type (WT) strain of SARS-CoV-2. The FCD, which is a critical determinant for the transmission of SARS-CoV-2 among humans, is relatively unexplored due to the unavailability of structural data for FCDs. 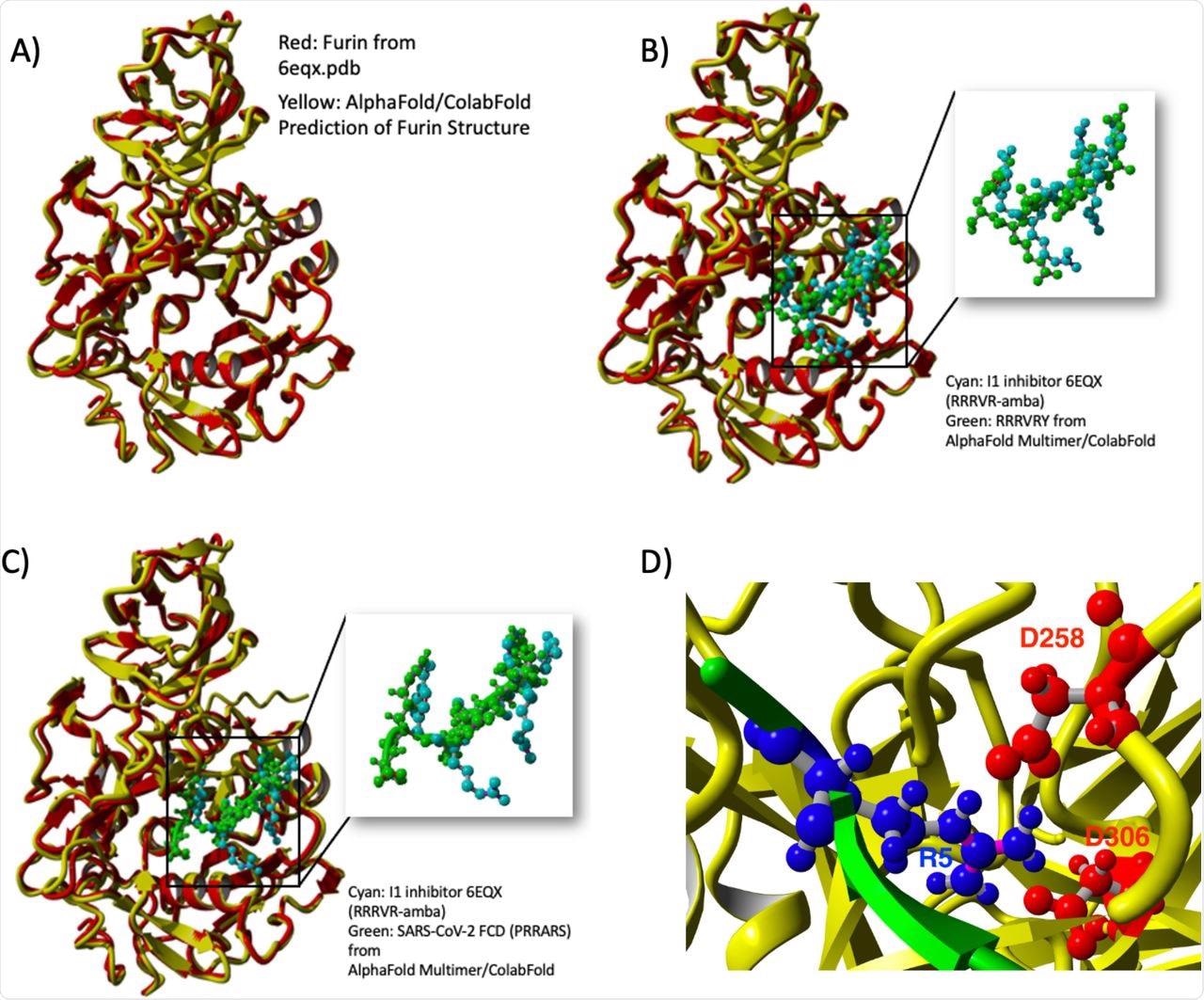 A) Comparison of structure of furin from Ref. (10) and PDB file 6EQX with the structure from AlphaFold (11) using the ColabFold environment (13). Clearly, the agreement is excellent (RMSD of 1.79Å). B) Comparison of structure of furin with RRRVR-Amba inhibitor from Ref. (10) with structure generated for the similar sequence RRRVRY by AlphaFold Multimer (12) using ColabFold (13). The Amba is buried in the furin S1 pocket (10) for the inhibitor, while AlphaFold predicts burial of the R at position 5. The backbone RMSD between the I1 and RRRVRY peptides is 2.77Å. C) Predicted structure by AlphaFold Multimer (12) for the WT PRRARS sequence of SARS-CoV-2 compared to Furin-I1 structure. D) Close up of binding pocket for fifth residue of PRRARS (WT FCD). Furin backbone in yellow, FCD backbone in green, R5 from FCD is blue, D258,D306 from furin in red.

In the present study, the researchers surveyed a total of 62 SARS-CoV-2 FCD sequences sourced from the global initiative on sharing all influenza data (GISAID) databases. They introduced mutations in silico for the Alpha, Omicron, and Delta variants for several rarely observed FCD sequences. In addition, the researchers introduced mutations in FCD sequences of other coronaviruses and the highly pathogenic Asian avian influenza A (H5N1) virus.

The researchers used AlphaFold and AlphaFold Multimer, implemented within the ColabFold suite, to predict the de novo structure of the WT furin enzyme with six inhibitory peptides (681-686) and polybasic FCD insertion region to study the FCDs for SARS-CoV-2 variants and other viruses. Based on molecular dynamic (MD) simulations of these structures, researchers assessed their equilibrium binding strengths, characterized by interfacial hydrogen bonds between the furin and FCD (FCD-furin HBonds), and generalized born surface area (GBSA) binding energies.

Taking the AlphaFold approach, the researchers concluded that the fifth amino acid in 93% of observed SARS-CoV-2 furin-FCD sequences from position 681, was arginine (Arg), a mutation in which was critical for stronger FCD-furin binding. In addition, the heat maps showed the importance of the fifth residue, which bound the S1 pocket of furin containing two aspartic acid residues, which was a structurally better fit for Arg than Lysine (Lys). 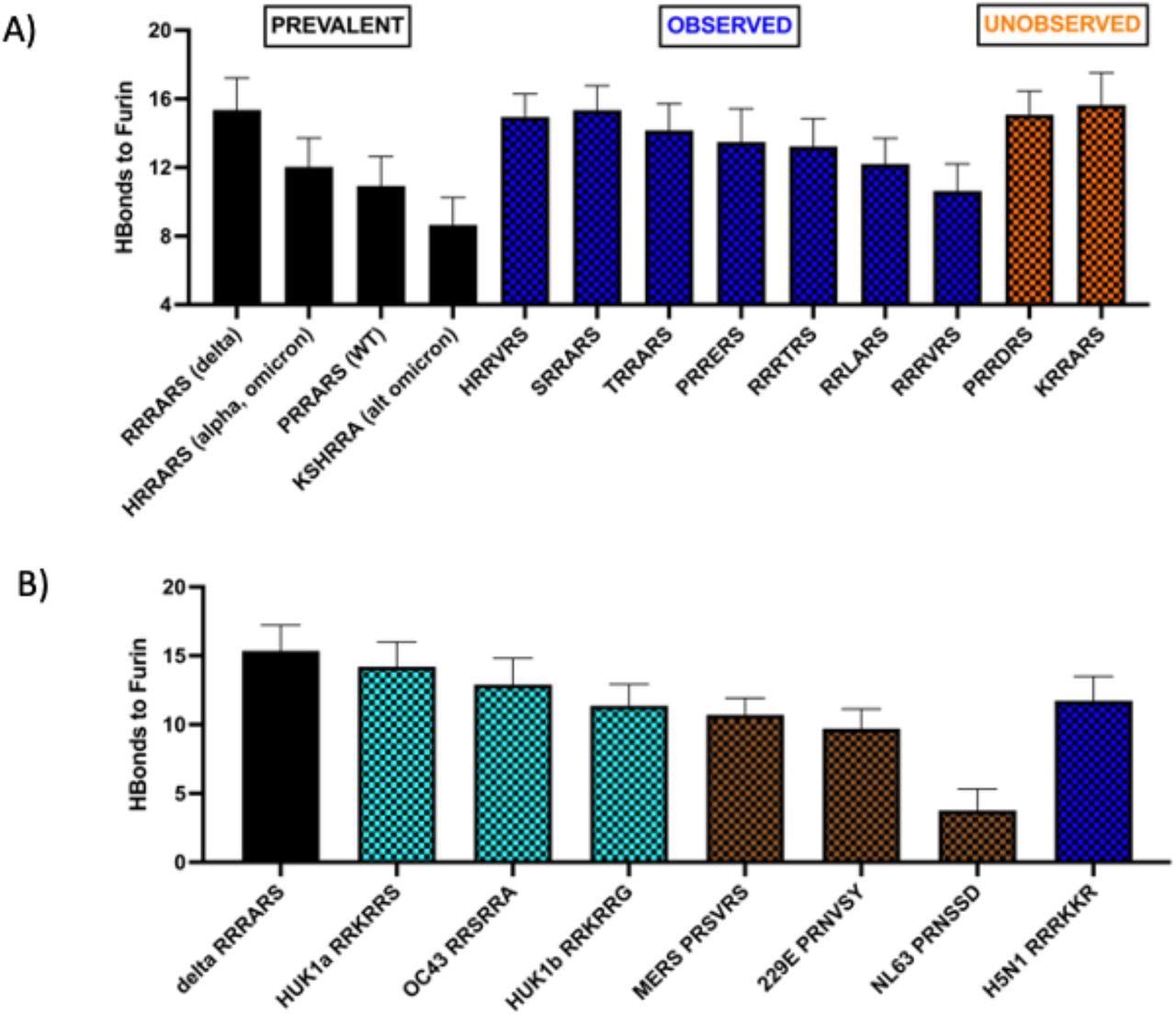 A) FCD-furin hydrogen bond counts between furin and SARS-CoV-2 binding sequences at 681-686 of the spike protein. The first four bars are prevalent forms (WT, delta, omi-cron/alpha, and alt omicron where we assume the sequence starts at position 679. The blue sequences are rare but observed in the GISAID (19) database; of these HRRARN and SR-RARS bind as strongly to furin within statistical accuracy as the delta sequence (RRRARS). The two unobserved sequences require double base mutations from existing extant codons but bear watching because of their strong binding to furin. B) FCD-furin hydrogen bond counts between furin and other viruses. The SARS-CoV-2 delta variant shows the strongest binding of any human coronavirus and exceeds the H5N1 influenza cleavage site.

The study results also showed that the furin S1 pocket was optimized for binding Arg, rather than Lys. The Arg residue made maximum hydrogen bonds (HBonds) with the furin enzyme, which showed a strong positive correlation with the overall HBond count.

FCD-furin HBond count at position five strongly indicated the total binding strength of this complex, even though it only represented a plurality of the HBonds. It is worth noting here that the maximum average of FCD-furin HBonds for a given number of amino acid residues (basic) peaks at 15.7 Hbonds for 4.06 residues.

Heat map of interfacial hydrogen bonds from furin to the six residue peptide by residue number (vertical) for various observed SARS-CoV-2 along with two unobserved, and for other human coronaviruses and H5N1. Clearly, the key residue for binding is the fifth.

Notably, the binding strength of two other rare FCD sequences also matched Delta within statistical accuracy. The dominance of the Delta variant FCD extended to other coronaviruses and the H5N1 influenza virus.

Further, the binding strength correlated inversely with the root mean square fluctuation (RMSF) of the first residue, thereby suggesting that the more the backbone outside the furin S1 pocket fluctuated, the less likely it was for the Arg to bind to the furin. This finding also explained the differences between the Delta FCD and FCD of other variants and viruses investigated in the current study.

Based on the survey of a large number of SARS-CoV-2 S protein sequences, including those of other human coronaviruses, H5N1 influenza, and Epstein-Barr virus, the study results suggest that no SARS-CoV-2 variant or other virus bound more strongly to the furin protease than the SARS-CoV-2 Delta variant.

Furthermore, the AlphaFold and AlphaFold Multimer analysis predicted the FCD-furin bound structure, thus demonstrating the criticality of insertion of Arg in the fifth position (P1) of the FCD in a furin S1 pocket for a stronger FCD-furin binding. This finding was in dramatic contrast with the findings of an earlier work that used a docking program for FCD-furin interface prediction.

Taken together, the study findings emphasize the criticality of experimental structural biology tests for further validation of FCD-furin interface predictions.

Engineered tissues have become a critical component for modeling diseases and testing the efficacy and safety of drugs in a...

A plant virus that infects legumes, called cowpea mosaic virus, has a special power that you may not have known...

Inside embryonic cells, specific proteins control the rate at which genetic information is transcribed from DNA to messenger RNA –...

Rhabdomyosarcoma is a type of soft tissue cancer. Scientists at St. Jude Children's Research Hospital studied the population of cells...

Researchers from the University of Tsukuba identify gene expression signatures in different types of lymph nodes cells that play an...

Genetic cause of lupus identified

An international team of researchers has identified DNA mutations in a gene that senses viral RNA, as a cause of...

A study on COVID vaccinated vs. unvaccinated that required hospitalization