The ongoing coronavirus disease 2019 (COVID-19) pandemic caused by severe acute respiratory syndrome coronavirus 2 (SARS-CoV-2) has significantly impacted the health of millions of people throughout the world and continues to cause considerable socio-economic and political challenges. Although COVID-19 vaccines have saved millions of lives to date, the continuous emergence of variants of the severe acute respiratory syndrome coronavirus 2 (SARS-CoV-2) requires updated vaccines and/or other preventive measures. 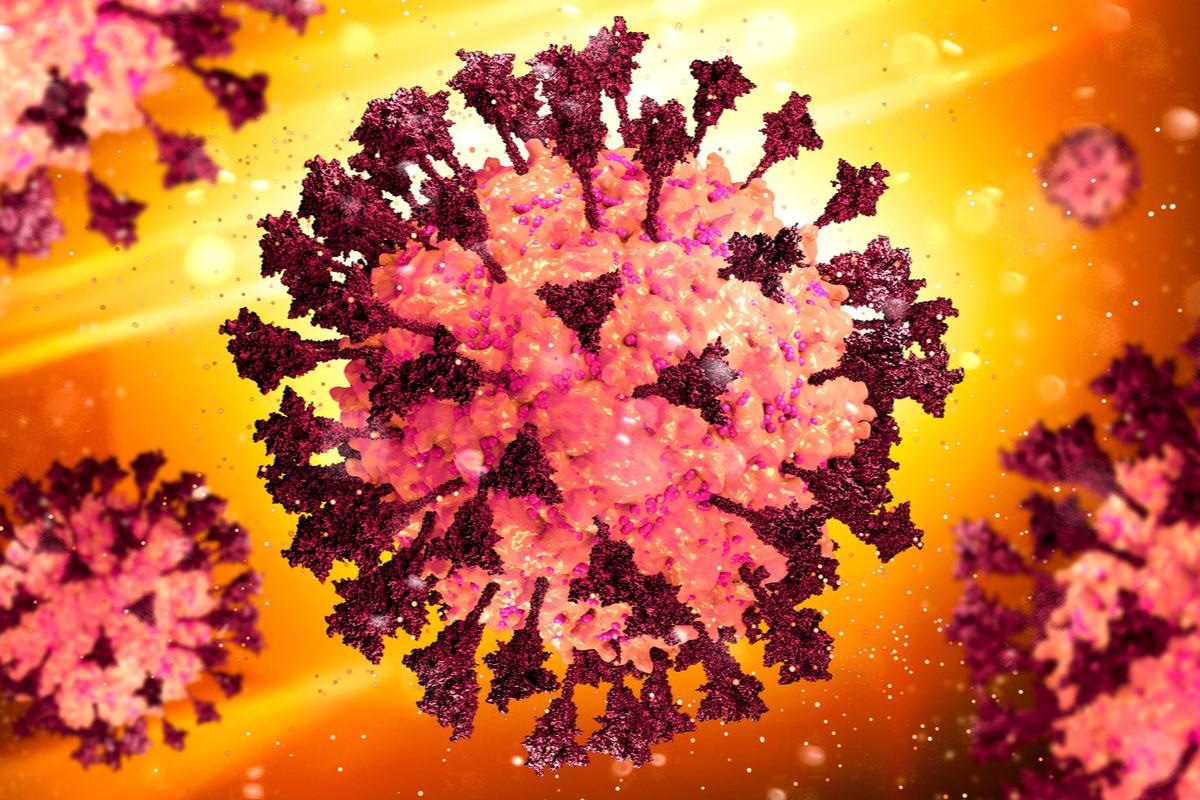 Similar to the other viruses within the Coronaviridae family, including SARS-CoV-1 and the Middle East Respiratory Syndrome (MERS)-CoV, SARS-CoV-2 infection is also associated with causing acute respiratory distressed syndrome (ARDS) in severe cases. ARDS is a life-threatening condition that causes leakage of fluid into the lungs and is most commonly associated with mortality due to severe COVID-19. Several studies indicate that a dysregulated hyper-inflammatory reaction, or cytokine release syndrome (CRS), is responsible for acute lung injury and the development of ARDS.

Most of the cytokines expressed in the lungs are generally found to be linked to innate immunity, including chemokines, pro-inflammatory cytokines, growth factors, and immunoregulatory cytokines. Studies have also indicated that certain cytokines are predictive of severe COVID-19 such as C-X-C motif chemokine ligand 10 (CXCL10)/ interferon gamma-induced protein 10 (IP-10), interleukin 10 (IL-10), and IL-6.

SARS-CoV-2, like SARS-CoV-1, uses the angiotensin-converting enzyme 2 (ACE2) to infect host cells through its spike glycoprotein (S). The SARS-CoV-2 S glycoprotein is a trimer, in which each protomer consists of 1,260 amino acids.

A region known as the “galectin-fold” is located within the NTD of SARS-CoV-2 and has a high degree of structural similarity with human galectin-3 (Gal-3). Gal-3 is capable of activating various immune cells such as monocytes and macrophages. Therefore, it has been proposed that the S1-NTD of SARS-CoV-2 can act like Gal-3, which might explain the immunological conditions observed in COVID-19.

A new Frontiers in Immunology study aimed to determine whether portions of the SARS-CoV-2 spike protein are capable of activating innate immune cells like Gal-3.

The current study involved the coupling of recombinant SARS-CoV-2 S protein components to microtiter plate wells. Thereafter, monocytes, basophils, and dendritic cell (DC) subtypes were isolated from blood samples collected from anonymous subjects. Co-culture conditions were maintained to induce the production of cytokines by these cells. 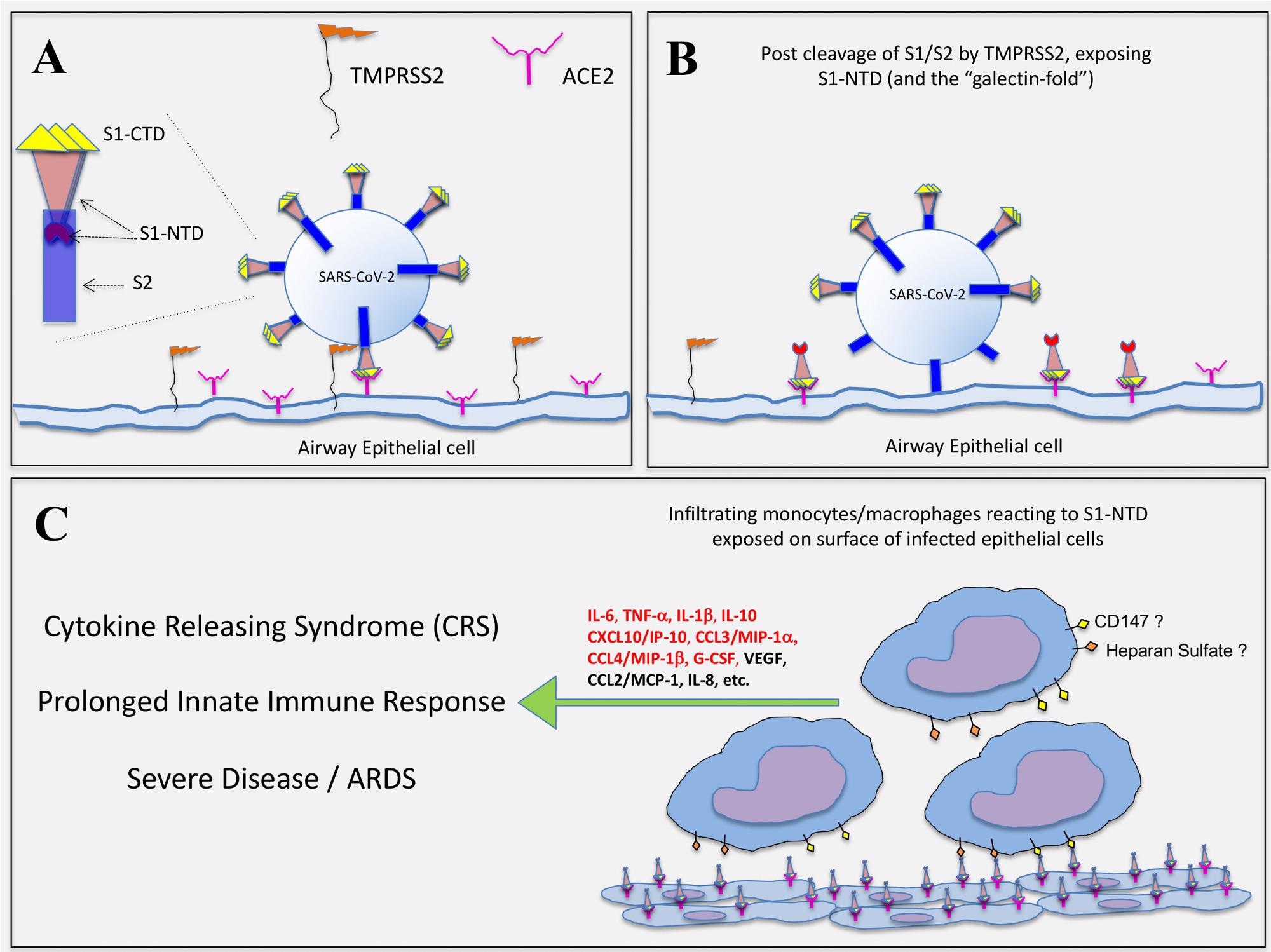 Hypothetical representation of how SARS-CoV-2 infection exposes the S1-NTD (and “galectin-fold”) on epithelial cells for potential activation of infiltrating monocytes. (A) SARS-CoV-2 infection of epithelial cells is initiated with the binding of S1-CTD/RBD to ACE2. The serine protease, TMPRSS2, expressed on host cells then cleaves the spike protein at the S1/S2 linkage. (B) The S2 subunit undergoes structural changes, serving first to anchor the virus and then facilitating its entry into the cell. It is proposed that the S1/S2 cleavage event simultaneously exposes the S1-NTD, which extends outward as the S1-CTD/RBD remains bound to ACE2. (C) Infiltrating monocytes/macrophages are then activated to produce COVID-related cytokines via cell surface glycoproteins (e.g. CD147) and/or polysaccharides (e.g. Heparan Sulfate) interacting with S1-NTD, which mimics EC-Gal-3. Those cytokines indicated in red type were significantly impacted by the S1 subunit in this study.

The results of the current study indicate that the culture wells pre-coated with S1 induced a higher number of monocytes as compared to the medium alone. IL-6 levels were found to be 12.5-fold greater as compared to controls when the wells were coated with S1.

However, when the wells were coated with S2, IL-6 levels were found to be two-fold greater than controls. No IL-6 responses were observed in the case of basophil cells or DC subtypes.

Higher levels of IL-1β and tumor necrosis factor α (TNF-α) were also induced in wells coated with the S1 subunit to a greater extent than those in wells with either the S2 or S1/S2 components or uncoated wells. IL-3, which was found to augment the response for IL-6, triggered the production of IL-1 β and TNF- α.

Plasmacytoid DCs (pDCs) and myeloid DCs (mDCs) were found to produce these cytokines in response to IL-3 alone. Additionally, IL-10 production was observed in seral monocyte cultures, although the levels were much lower.

Thus, S1 was found to induce the secretion of the growth factor granulocyte colony-stimulating factor (G-CSF) by the monocytes. However, none of the S proteins could induce any other cell type for the production of other growth factors. The S proteins also did not affect most of the Th1 and Th2 ILs.

The S1 subunit was also found to act on monocytes to produce several chemokines such as CCL4/macrophage inflammatory protein 1 beta (MIP-1b), CCL3/MIP-1a, and CXCL10/IP-10. However, the S1 subunit was unable to induce these chemokines from the other cell types. In combination with IL-3, the S2 subunit induced both CCL3/MIP-1a and CCL/ MIP-1b from only mDC.

The galectin fold was found to reside within the NTD of the S1 subunit, while the CTD/RBD region, which was known to bind ACE2, had no role in activating monocytes. Additionally, galectin-3 binding protein (LGALS3BP) suppressed the production of IL-6 by monocytes in a dose-dependent manner.

The current study demonstrates that the S1-NTD of SARS-CoV-2, which mimics Gal-3, is capable of activating innate immune cells, especially monocytes. Therefore, the development of Gal-3-like antagonists or neutralizing antibodies that target the S1-NTD can be helpful in preventing of prolonged innate immune dysfunction and onset of CRS that can ultimately lead to ARDS.

Feb 17 2022Reviewed by Emily Magee Olympus is proud to announce the opening of the Olympus Discovery Center at Texas...

Iowa State University scientists may have uncovered an important clue that sheds light on why pigs don't get sick when...

Intestinal tissue-resident lymphocytes regulate their activity depending on glucose availability

One often thinks that the early embryo is fragile and needs support. However, at the earliest stages of development, it...

CBD-based bioplastic material could one day be used in medical implants, food wrappers

With the legalization of hemp cultivation, products containing cannabidiol (CBD) have become popular. Many of these oils and creams claim...