When the severe acute respiratory syndrome coronavirus 2 (SARS-CoV-2), which is the virus responsible for the coronavirus disease 2019 (COVID-19), first emerged, many governments around the world were forced to enact costly and restrictive measures to reduce its transmission. As several different vaccines were developed and mass vaccination campaigns were initiated, many developed nations began to reduce the severity of their COVID-19 restrictions.

However, new SARS-CoV-2 variants continue to emerge, several of which are capable of evading both vaccine-induced and natural immunity. In a recent study posted to the preprint server bioRxiv*, researchers from the Yale University School of Medicine have developed a new vaccine candidate that is specifically targeted against the SARS-CoV-2 Omicron variant. 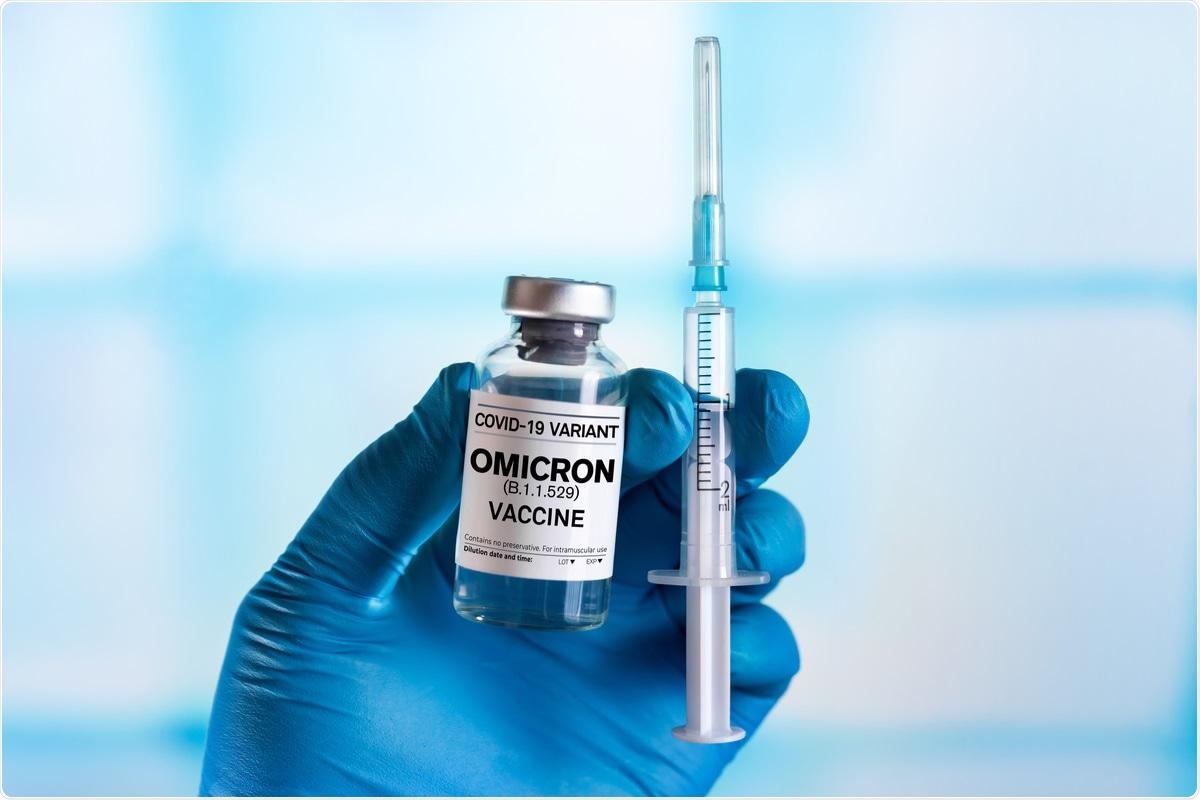 In the current study, researchers developed their vaccine candidate to be Omicron-specific by basing it on the spike sequence of the Omicron variant, with the spike coding sequence flanked by 5’ and 3’ untranslated regions (UTRs) and a 3’PolyA tail. Six mutations known to improve the stability and prefusion state were introduced to the sequence, whereas the furin cleavage site was replaced with GSAS stretch to maintain the integrity of the two subunits.

The transcribed spike messenger ribonucleic acid (mRNA) material was then encapsulated into lipid nanoparticles (LNPs) to produce both WA-1 and Omicron LNP-mRNAs. Several downstream assays including dynamic light scattering, transmission electron microscope, and receptor binding assays were subsequently used to confirm that the product was of sufficient quality and showed the right biophysical properties. To this end, the researchers successfully demonstrated that in HEK293T cells, the Omicron LNP-mRNA could produce Omicron HexaPro spike protein capable of binding to the human angiotensin-converting enzyme-2 (hACE2) receptor.

Following this, the researchers moved to characterize the immunogenicity of the Omicron LNP-mRNA in vivo by vaccinating and testing mice. Blood was collected prior to immunization on days 0, 13, and 21, and then one week after the second booster dose.

Plasma was isolated in the blood and used an enzyme-linked immunosorbent assay (ELISA) and neutralizing assays. The results showed significant increases in antibody titers against the Omicron spike receptor-binding domain (RBD) in the ELISA assays after both the initial and booster vaccination shots. 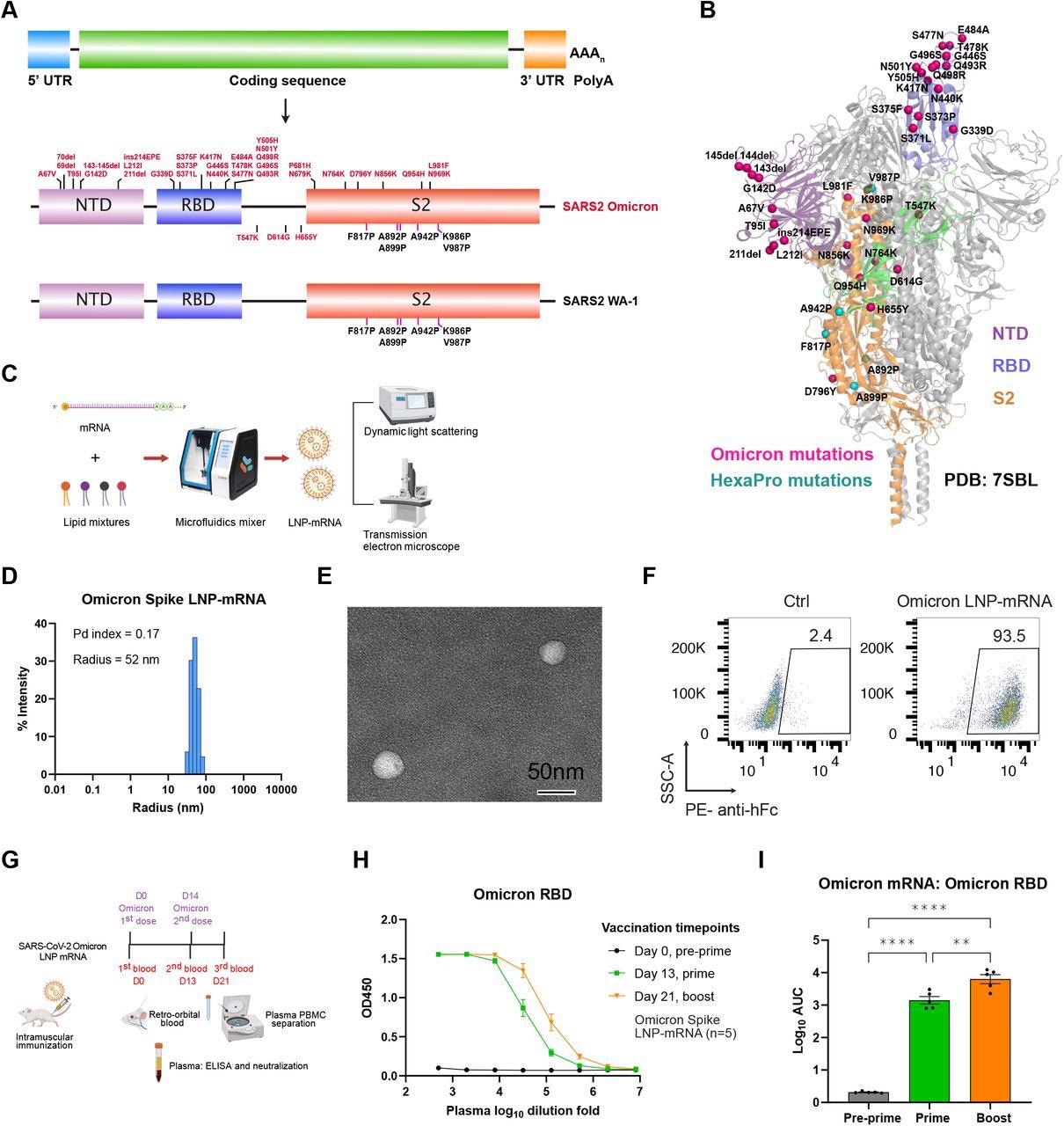 To this end, mice were sequentially vaccinated with two doses of the WA-1 and Omicron LNP-mRNA, with a 106-day interval between the two different types. Blood samples of these were collected over time, followed by the purification and analysis of plasma samples in ELISA/neutralization assays against the SARS-CoV-2 WA-1 strain, as well as the Delta and Omicron variants.

The binding antibody titers elicited by WA-1 mRNA-LNP were significantly weaker against Omicron as compared to Delta or WA-1 and were 20-fold and 11-fold lower on days 35 and 127, respectively, as compared to WA-1. By day 127, the titers decreased to a near-baseline level.

Pseudovirus neutralization assays were then performed, as these experiments have become a standard measure for determining the effectiveness of treatments and vaccines against SARS-CoV-2. This assay produced similar results to the ELISA assays, with the booster vaccination dose significantly increasing the antibody titers against the Omicron variant, which again had fallen to near-zero by day 127.

The authors of the current study have successfully generated a vaccine candidate specifically designed to prove effective against the SARS-CoV-2 Omicron variant. While further studies must be conducted, this vaccine could be a powerful tool in reducing the spread of the Omicron variant and help protect vulnerable individuals.

Genetic testing of saliva samples identifies the SARS-CoV-2 virus more quickly than testing of nasal swabs. The research is published...

The relative contagiousness of the Alpha, Delta, and Omicron SARS-CoV-2 variants