Early on in the coronavirus disease 2019 (COVID-19) pandemic, many governments around the world enacted costly and restrictive measures to reduce the rapid transmission of the severe acute respiratory syndrome coronavirus 2 (SARS-CoV-2). These included mandatory face masks in public, the closing of public areas, and even full lockdowns/stay-at-home orders. 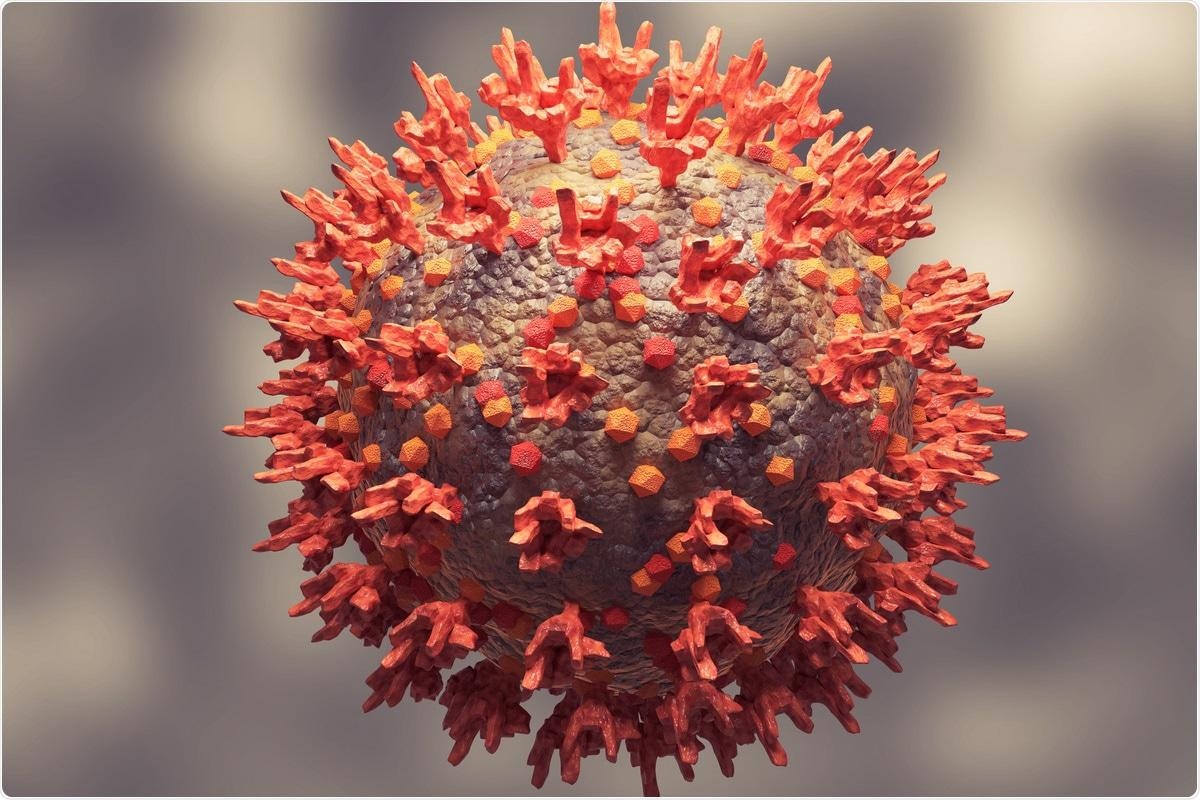 Study: The rise and fall of SARS-CoV-2 variants and the emergence of competing Omicron lineages. Image Credit: Adao / Shutterstock.com

While the development and mass distribution of COVID-19 vaccines allowed many developed nations to begin dismantling these measures, developing nations continue to have limited access to these vaccines. Furthermore, the emergence of highly transmissible SARS-CoV-2 variants has threatened the efficacy of these vaccines as a result of their ability to evade the immune response induced by the vaccines.

Much of the scientific attention given to SARS-CoV-2 mutations is focused on mutations within the four structural proteins, particularly the spike protein, as it is key to the pathogenicity of SARS-CoV-2. The SARS-CoV-2 spike protein consists of two subunits that require cleavage by a host enzyme to become functional. These subunits include the S1 domain, which binds to the angiotensin-converting enzyme 2 (ACE2) receptor to permit viral cell entry into host cells, as well as the S2 subunit, which mediates membrane fusion.

In a recent study published on the bioRxiv* preprint server, researchers investigate SARS-CoV-2 mutations present within both the spike protein, as well as those that exist across the whole genome of different SARS-CoV-2 variants.

The researchers began by filtering all the SARS-CoV-2 genomes that were available on the GISAID database, which included over five million genomes that have been sequenced to date. This subset was further filtered using NextClade, with only good quality scores retained.

Taken together, the researchers collected about 1.7 million high-quality genomes.

The researchers then randomly selected samples and compared their genomes to selections from those obtained throughout the pandemic, including the original Wuhan reference genome and the most recent Omicron genomes. 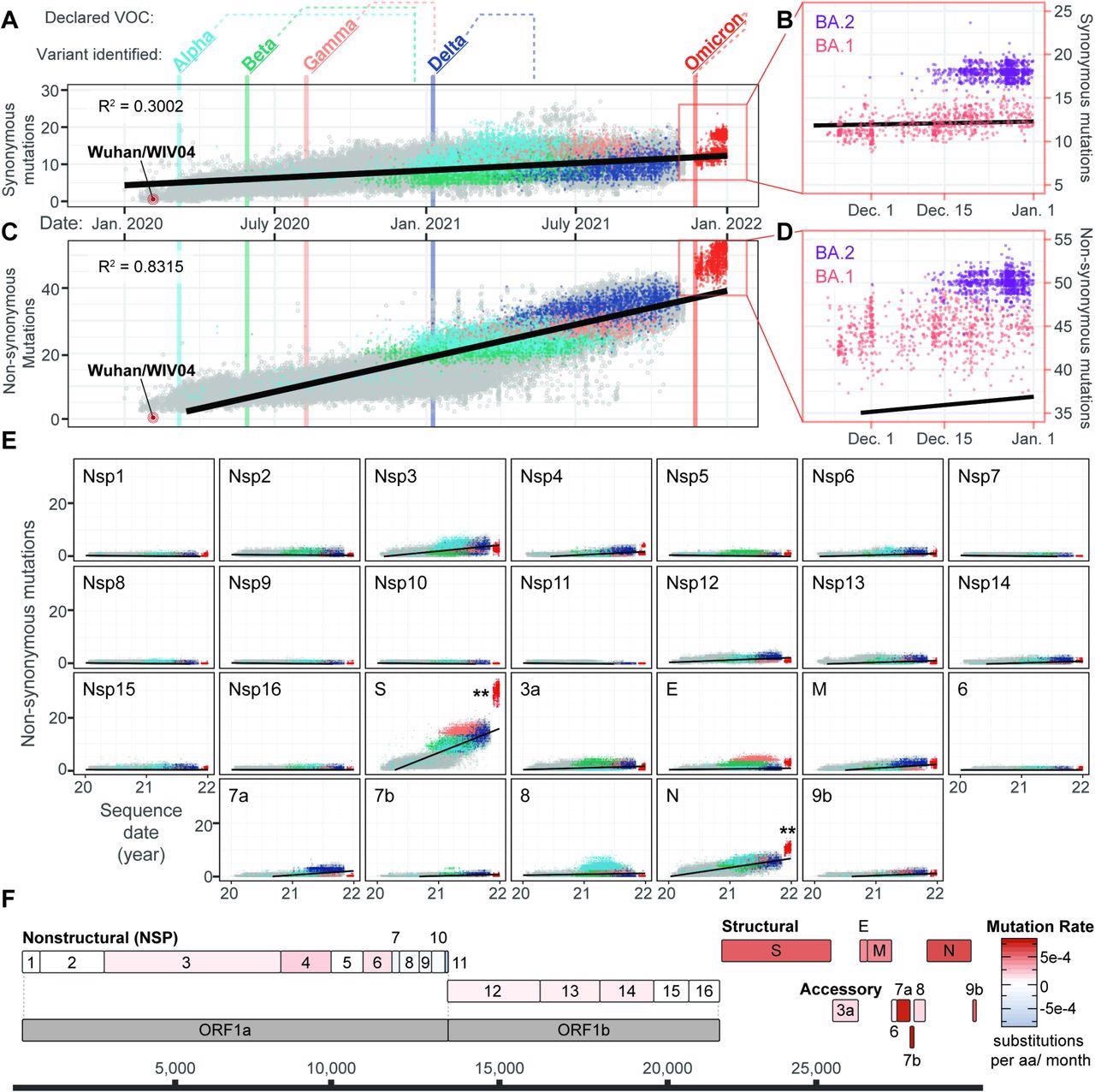 Evolution of SARS-CoV-2 and the emergence of new variants. A) Synonymous mutations in 83,204 genomes sampled from Dec 19, 2021, to Jan 14, 2022 (GISAID accessions available at: github.com/WiedenheftLab/Omicron). Variants of concern (VOC) are labeled in bold, with dates of the first sequence for each lineage shown as vertical lines through the graph. The time elapsed between first detection and VOC designation by the WHO is shown as dotted lines above the graph. Dots are colored similar to variant names, and grey circles represent non-VOC lineage genomes. A linear regression line is shown in black. Omicron genomes are <2.58 sigma from the mean, indicating that do not significantly deviate from the expected number of mutations. B) Inset from Panel A. Omicron is divided into two lineages, BA.1(red) and BA.2 (purple). Synonymous mutations are significantly different between these two lineages (T-test, p < 2e-16). C) Non-synonymous mutations in SARS-CoV-2 genomes are plotted as in panel A. Omicron variants deviate from the linear trendline (i.e., expected mutation rate) as the majority are >2.58 sigma from the mean (p < 0.01). D) Inset from Panel C. Non-synonymous in BA.1 (red) are significantly different from BA.2 (purple) (T-test, p < 2e-16). E) Non-synonymous mutations accumulated in SARS-CoV-2 proteins over time. Linear regression lines and variant colors are plotted as in panel A. Double-asterisks denote statistically significant (p < 0.01) increases in Omicron mutation rates for a given protein, compared to mutation counts predicted by linear regression analysis of non-Omicron sequences. F) Schematic depiction of SARS-CoV-2 protein-coding sequences, with each gene colored according to non-synonymous rates predicted in panel D that have been normalized to the length of each respective protein.

As a result of their findings, the authors suggest that some COVID-19 tests and treatments that rely on the detection of the nucleocapsid protein will be less effective. It is also likely that some methods for determining whether an individual has been infected previously or has simply received the vaccine will need to change.

Previous analyses did not reveal the cause of the differences in protein length. The scientists solved this by normalizing non-synonymous mutation rates by dividing each by the number of amino acids present in the proteins.

The accessory proteins, such as 7a, 7b, and 9b, were found to change more rapidly as compared to any other viral protein. These proteins are implicated in immune suppression; therefore, these changes could partially explain why the Omicron variant is capable of escaping both naturally acquired and vaccine-induced immunity.

The results of the current study demonstrate that the Omicron variant shows a substantially increased rate of non-synonymous mutations as compared to previous variants and that this pattern is even more exaggerated in the BA.2 sublineage.

The Supreme Court on Friday took up one of the most contentious issues of the covid-19 pandemic, hearing a series...

A recent study posted to Preprints with The Lancet* investigated the disease severity of severe acute respiratory syndrome coronavirus-2 (SARS-CoV-2)...

In a recent study published in Science*, researchers evaluated the ability of receptor-binding domain (RBD) antibodies to bind to and neutralize...

Over the past year, a series of severe acute respiratory syndrome coronavirus 2 (SARS-CoV-2) variants have emerged in different parts...

Combination of Covid-19 and flu linked to greater risk of severe disease, death

Adults in hospital who have Covid-19 and the flu at the same time are at much greater risk of severe...

While the majority of patients diagnosed with the coronavirus disease 2019 (COVID-19) will experience mild symptoms, a significant minority of...