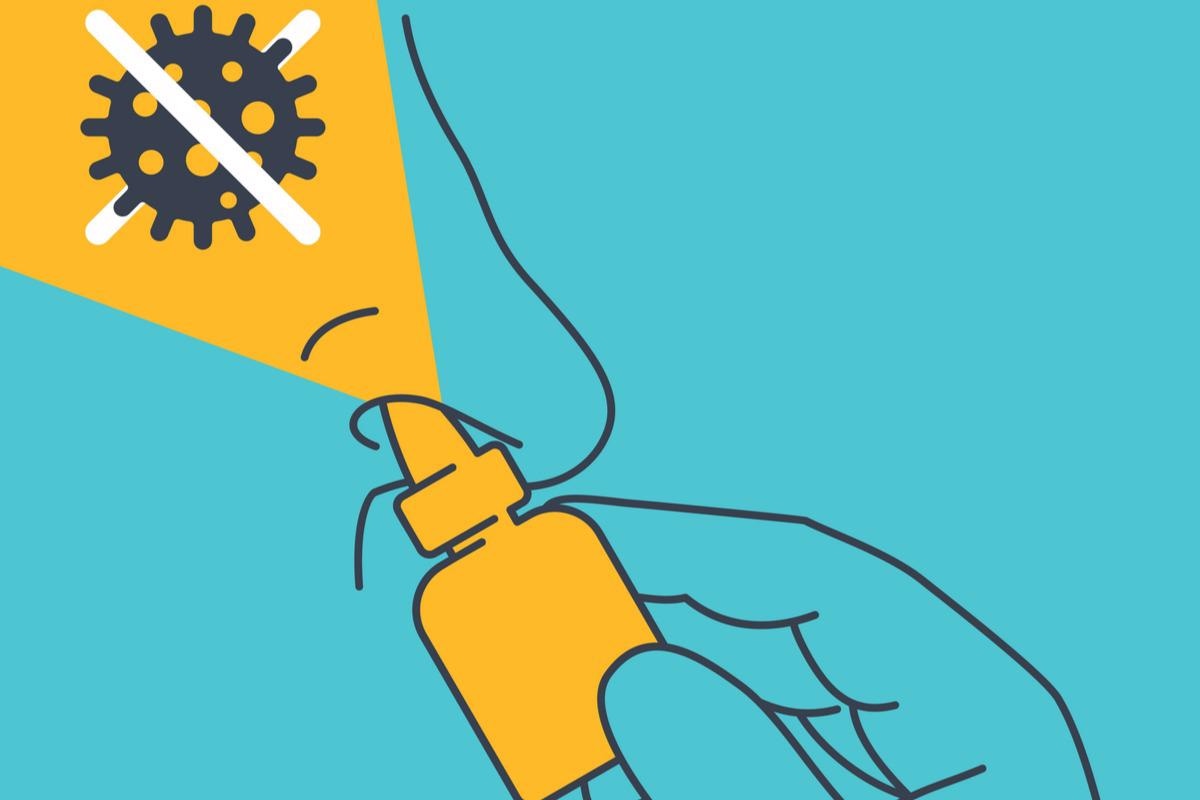 The unprecedented global health crisis caused by the coronavirus disease 2019 (COVID-19) pandemic has necessitated the development of efficient drug delivery systems that can effectively treat or provide relief from symptoms of SARS-CoV-2 infections. Nasal sprays are one such tool that provides efficacious drug delivery, which can be optimized for the improved effectiveness of a drug.

The dynamics of a nasal spray were evaluated against ambient airflow using the Lagrangian frame of inert discrete phase simulations. Transport equations were integrated, and a no-slip boundary condition was implemented for the cavity walls to calculate the localized droplet clustering around the intranasal tissues. The density of the drug formulation was calibrated to 1.5 g/ml while inert drug droplets of diameters ranging from 1 – 24 µm were released at a pace of 3000 droplets per iteration.

To understand the most effective way to use a nasal spray device, digital models used in the study were tilted forward at an angle of 22.5° while the axis of the spray was closely aligned to the lateral nasal wall. The spray bottle was then placed 5 mm into the airspace as recommended by commercials sprayers.

The average improvement of IU compared to CU was 2.117 orders of magnitude and a standard deviation of 0.506 orders. Furthermore, on comparing experimental in vitro projections to computational predictions, a difference of less than 5% was observed.

The study findings showed that a droplet size in the range of 6–14 µm was the most effective in improving the inhaled percentage deposition at targeted upper airway sites, which is crucial in treating SARS-like infections. A significant correlation between the IU protocol and the PD results established the versatility of the IU protocol, irrespective of user subjectivities. The negligible difference in the computational and the in vitro data proved the resilient nature of the in silico framework implemented in this study.

The efficacy of the IU protocol over the CU protocol compelled a revision of the current usage instructions for nasal sprays. The researchers believe that next-generation intranasal drug formulations can be optimized using these findings.

A study published in the journal Immunity analyzed the varied manifestations of severe acute respiratory syndrome coronavirus 2 (SARS-CoV-2) in...

In a recent study posted to the bioRxiv* preprint server, a team of researchers assessed the risk of severe acute...

In research recently published in the journal of Science Advances, an interdisciplinary team of researchers from the University of Chicago...

In a recent study posted to the Nature In Review* preprint server, researchers performed a comprehensive, in-depth comparison of the severe...

COVID-19 research made easier with outbreak.info

In a recent paper posted to the bioRxiv* preprint server, researchers reveal the development of an open-source database that provides...