Even as the coronavirus disease 2019 (COVID-19) pandemic persists, newer and more effective vaccines are being developed using novel platforms, such as nanocell technology. A new study under consideration at the Nature Portfolio Journal posted to the Research Square* preprint server describes the high level of neutralizing antibodies elicited by a nanocell vaccine against the severe acute respiratory syndrome coronavirus 2 (SARS-CoV-2) in vitro, in vivo, and human studies. 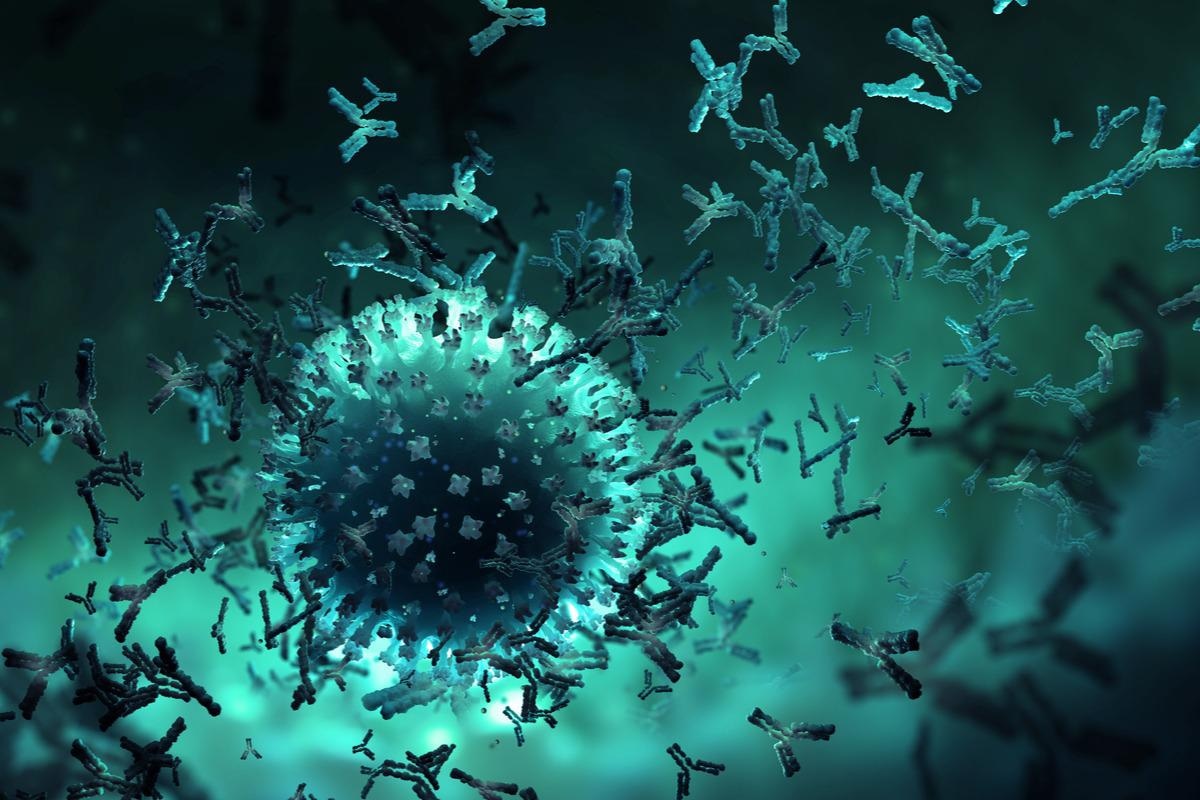 As of April 11, 2022, SARS-CoV-2 infection has caused over 6.2 million deaths. In response to the outbreak of SARS-CoV-2, many vaccines were rolled out at unprecedented speed. However, the continued emergence of highly transmissible immune escape variants has limited efforts to reduce the spread of SARS-CoV-2 and end the current pandemic.

Large-scale administration of the most effective vaccines against the coronavirus disease 2019 (COVID-19) has been challenging due to the ultra-cold storage conditions required for nucleic acid vaccines at -20 oC to -70 oC, as well as their short shelf life.

Nanocells are about 400 nanometers (nm) in diameter, lack chromosomes, and are called EnGeneIC Dream Vector (EDVTM). EDV is a derivative of a mutant bacterium of the species Salmonella typhimurium that is developed through budding caused by the mutation.

Earlier EDVs are currently being investigated in early clinical trials for their ability to deliver anti-cancer therapy to solid cancers. These trials have elicited promising results including the arrest of cancer growth, increased survival, and low or no toxicity.

In the nanocell vaccine developed in the current study, the EDVs contain about 100 recombinant bacterial plasmids each that encode the viral spike protein to stimulate a type I interferon (IFN) response. A plasmid-encoded spike protein produced within the nanocell cytoplasm at about 16 nanograms (ng) per 109 EDVs, as well as the glycolipid adjuvant α-galactosylceramide (αGC), which stimulates a type II interferon response, are included in the vaccine formulation.

The EDV nanocell vaccine was able to deliver the spike protein and adjuvant to the dendritic cells (DCs), which present antigens to the rest of the immune system. Both the viral spike and adjuvant were expressed on the surface of the DCs.

This triggers an anti-spike antibody and cellular response. At one month from the second dose of the vaccine, antibodies were present at higher levels, rising from day seven.

While immunoglobulin M (IgM) levels declined thereafter by day 21, IgG remained high. Neutralizing antibody titers were high at day 28 and showed activity against all SARS-CoV-2 variants of concern (VOCs), including the Omicron variant.

The Th2 cytokine IL-21 was also higher in mice that recieved the EDV-COVID-αGC. This leads to natural killer (NK)-primed DC activation of Tfh, which is required for T-cell-dependent B-cell activation, differentiation, and germinal center (GC) reactions, along with the selection of B-cells that secrete antigen-specific high-affinity antibodies. Notably, this is not seen after messenger ribonucleic acid (mRNA) vaccine administration.

Tfh cell cognate interactions with B-cells within the lymphoid follicles produce either plasmablasts, which are long-lived antibody-producing B-cells, memory cells or plasma cells. Further affinity maturation within the GCs produced by proliferating B-cells is key to increased antibody affinity. Tfh cells are required for both the initial activation of B-cells and within the GC, thus facilitating their activation and differentiation.

In addition, Tfh cells facilitate class switching to IgG subtypes by naïve B-cell-increased production of these subtypes by the memory B cells. The differentiation of naïve B-cells to plasmablasts has not been observed following mRNA vaccination.

The B-cell response showed an increase in bone marrow-derived B-cell activity. Both IgM and IgG with this vaccine were higher than for other groups. The T-cell activation following exposure to the spike protein showed a higher CD3/CD69, while CD4+ T-cells demonstrated an IFN-γ response within 24 hours.

The antibodies elicited were capable of neutralizing both the ancestral variant of SARS-CoV-2, as well as other VOCs such as the Alpha, Beta, Gamma, and Delta variants. Not only is the neutralizing potency of the immune response elicited by this vaccine over 90% but it also neutralizes Omicron at over 70%.

In an ongoing early human trial for patients with early cancer, the levels of these cytokines remained within the physiological range. T-cells bearing both CD4 and CD8 T-cells increased within a month of the initial dose, as did CD69+ activated T-cells. There was also an increase in Tfh and central memory T cells.

Both naïve B cells and plasmablasts also increased markedly at this point. Similarly, the injection produced spike-elicited IFNγ and IL21 by day 28. Stimulated cells were able to neutralize the viral receptor-binding domain (RBD)-receptor binding and remained consistent for three or more months following injection. 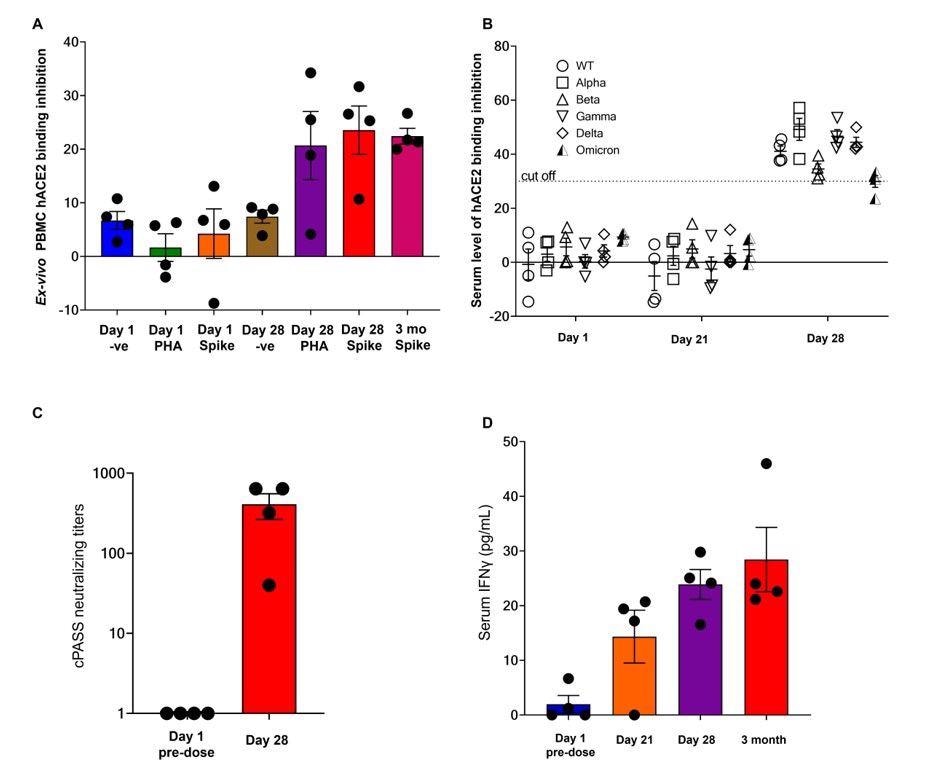 The immune escape capability of SARS-CoV-2 VOCs has been a constant challenge to vaccine efficacy during the current COVID-19 pandemic. The novel vaccine platform discussed in the current study shows that EDVs are taken up and digested by phagocytic cells like the DCs and macrophages.

This allows the spike antigen and adjuvant to be delivered to the DCs, as they are expressed on the cell surface. This leads to the recruitment of NK T-cells that have T-cell receptors capable of binding the αGC on the DC surface. The result is a rapid production and secretion of IFNγ, which remains elevated at three months from vaccination in the four human volunteers.

The adjuvant plays a significant role in the enhancement of anti-spike IgG titers, perhaps by directing the vaccine towards the NK-DC pathway. This leads to GC formation and the release of high-affinity antibodies in large volumes. In the presence of the adjuvant, the activation of NK T-cells by the spike antigens leads to the maturation of DCs, as well as the rapid and increased expression of costimulatory molecules on the DC surface.

This also causes IL-12 secretion which, in turn, enhances cell killing by cytotoxic CD8+ T-cells and the priming of CD4+ T-cells that are required to facilitate the switch of B-cells to specific antibody production. The rapid and elevated cytotoxic T-cell response leads to early viral clearance and durable memory responses specific to the spike. 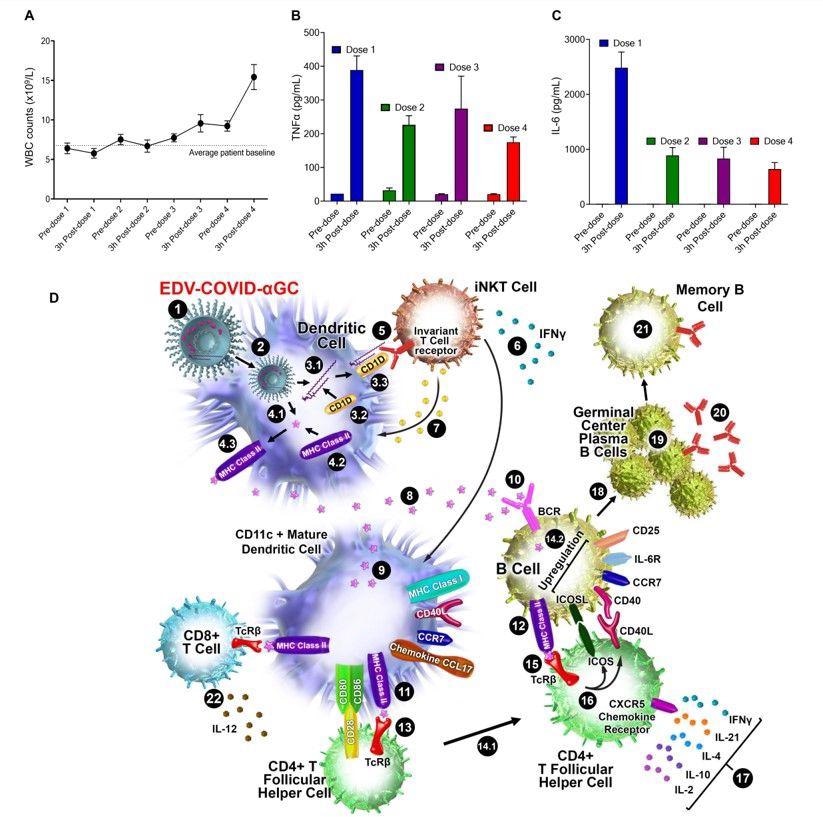 Patient immune response and schematic diagram of iNKT-licensed dendritic cell activation. (A) WBC counts from 13 patients receiving 4 doses of EDV-αGC over a 4-week period. (B) Serum TNFα and (C) IL-6 levels of 13 patients receiving 4 doses of EDV-αGC over a 4-week period. Data presented as mean + SEM. (D) Schematic diagram of iNKT-licensed dendritic cell activation; (1) EDV-COVID-αGC injected i.m. in mice, (2) phagocytosed by dendritic cells (DC), degraded in lysosomes, (3.1) αGC released from EDVs, (3.2) CD1d binds to αGC, (3.3) CD1d:αGC complex displayed on DC cell surface, (4.1) spike polypeptides also released from EDVs, (4.2) MHC Class II binds to the S-peptides, (4.3) display them on same DC cell surface. (5) iNKT semi-invariant T cell receptor binds to CD1d/αGC complex, (6) rapidly secretes IFNγ which triggers upregulation of CD40 ligand in DCs inducing DC maturation/activation with increased costimulatory capacity through upregulation of CD80, CD86, CCR7, MHC Class I molecules, pro-inflammatory cytokine IL-12 & chemokine CCL17. (7) Binding of CD1d:αGC complex to the iNKT TCR triggers perforin release which kills the CD1d/αGC complex displaying DCs. (8) S-polypeptides are released from dying DCs, (9) endocytosed by activated CD11c+ DCs and (10) naïve B cells via B cell surface receptor, and (11, 12) displayed on each cell surface via MHC Class II. (13) MHC Class II/spike on DC surface binds to CD4+ TCRβ on CD4+ T follicular helper (TFH) cells, and (14.1) these signals induce the TFH cell differentiation and upregulation of chemokine receptor CXCR5 and downregulation of CCR7, which allows these cells to migrate to the T/B border. (14.2) B cells activated by S-polypeptide engagement of BCR increase CCR7 expression and migrates to the T/B follicle border in search of cognate CD4+ T cells. (15) Recognition of the S-peptide/MHC II complex on B cells by the TCRβ enables TFH cells (16) to express CD40 ligand and ICOS and (17) secretes the cytokines IL-21, IFNγ, IL-4, IL-2, and IL-10. TFH cells are strongly enriched for cells expressing the highest levels of IL-21. (18) this cognate help stimulates B cells to undergo intense proliferation, induction of Ig class switching, differentiation to plasma-like cells capable of secreting all major Ig isotypes. (19) Within GCs, B cells undergo somatic hypermutation and only B cells with the highest affinity antibody are selected. (20) These plasma cells secrete high affinity S-specific antibodies that can neutralize a variety of S-mutants. (21) These B cells differentiate into long-lived memory B cells. Throughout this process, IL-21 induces expression of CD25, enabling the B cells to respond to IL-2, also derived from TFH cells, which promotes the effect of IL-21. Similarly, IL-21 induces expression of IL-6R on PCs, which allows these cells to integrate survival signals by IL-6. (22) DCs displaying S-peptides via MHC class II also elicit an S-specific CD8+ T cell response.

The phagocytic DCs that take up the EDVs also respond to the pathogen-associated molecular patterns (PAMPs) like lipopolysaccharides associated with the EDVs, that cause DC activation and the release of TNFα, irrespective of the presence of adjuvant.

Hundreds of doses of EDV-based vaccines have been given to cancer patients in another trial, without toxicity and with increased lymphocyte activation, maturation, and proliferation. This suggests that the EDV-COVID-αGC vaccine may be useful, even in immunocompromised patients.

Furthermore, the nanocell vaccine developed in this study is shelf-stable, as it is in a lyophilized form, which enhances its logistical appeal for widespread distribution.

A Penn State-led team of interdisciplinary researchers has developed techniques to improve the efficiency of CRISPR-Cas9, the genome editing technique...

Drug-resistant, pathogenic yeasts found on surfaces of apples and other fruits

When they're prepared for transport, apples and other fruits are often treated with a fungicide to prevent spoilage and extend...

Calorie restriction has long been associated with reduced seizures in epilepsy. New research from Boston Children's Hospital helps explain how...

The role of wastewater surveillance for monitoring monkeypox

The recent spread of the monkeypox virus (MPXV) outside its known endemic regions has led to a recent global public...

Protein complexes that play a critical role in launching an immune response assemble in droplets that form within the liquid...

Plants and plant-derived preparations as co-treatments for COVID-19