The severe acute respiratory syndrome coronavirus 2 (SARS-CoV-2) uses the spike antigens on its surface to mediate host cell attachment and entry. A new Virology journal study shows that the N-glycosylation pattern of SARS-CoV-2 is crucial to normal spike activity, such that its in vitro activity is reduced by using molecules that inhibit the synthesis or attachment of spike N-glycans. 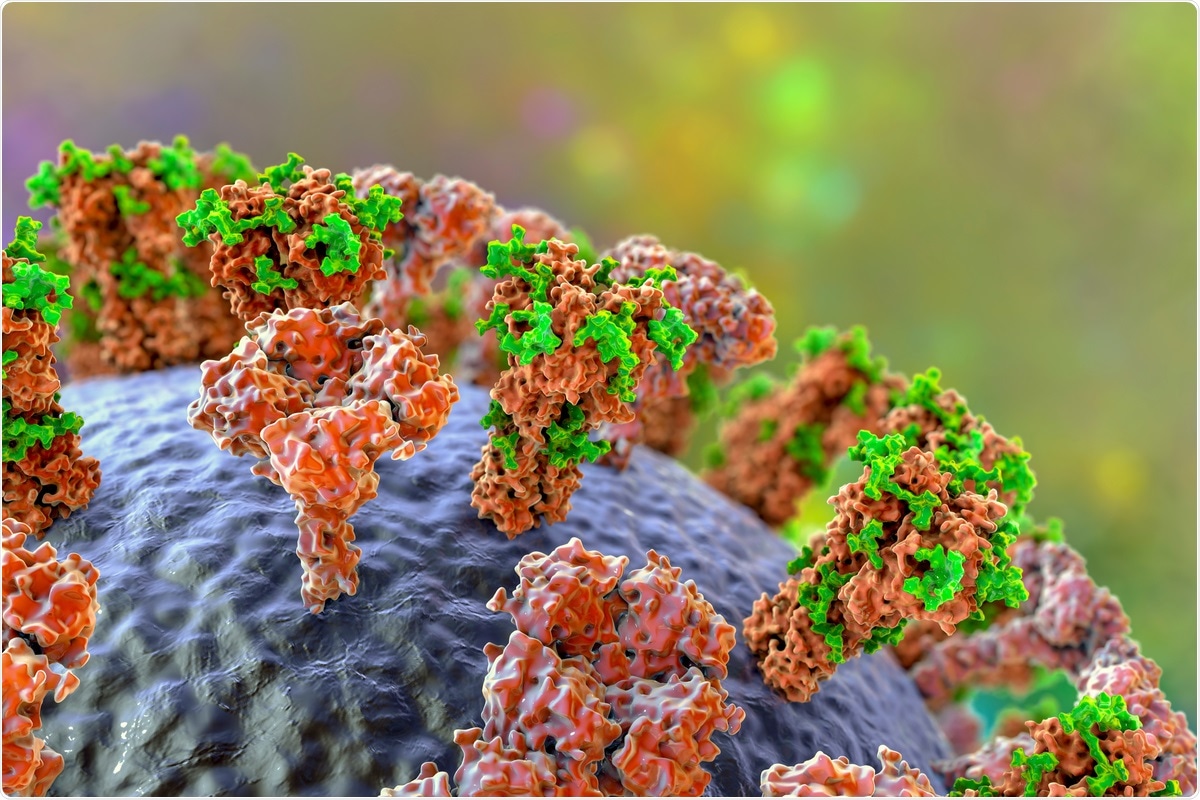 The emergence of new SARS-CoV-2 variants has caused major challenges to the global fight against the current coronavirus disease 2019 (COVID-19) pandemic, as many of these variants have shown resistance to antibodies elicited by previous infection or vaccines.

The SARS-CoV-2 spike protein binds to the angiotensin-converting enzyme 2 (ACE2) receptor on the host cell through its receptor-binding domain (RBD). The binding between the SARS-CoV-2 RBD and host cell ACE2 receptor is followed by a conformational change that triggers membrane fusion and endocytosis of the viral genome.

After both natural infection and vaccination, the spike protein undergoes post-translational modification through N-glycosylation with up to 66 sugars that are equally distributed between the three homotrimers.

N-glycans stabilize the trimeric spike and the open conformation of the RBD. Additionally, mutations at certain N-glycosylation sites cause a steep fall in pseudovirus infection rates. N-glycans are also flexible besides occupying large surface areas, thus allowing them to achieve immune evasion by hiding critical epitopes from the host cell.

In order to develop effective antivirals targeting N-glycans, more must be known about how these molecules function during SARS-CoV-2 infection. The endoplasmic reticulum (ER) possesses α-glucosidases that are required for N-glycosylated structures to achieve their mature form. Other possible targets include the α-mannosidase I and N-acetylglucosaminyl-transferase I (GnT-I) MGAT1.

The current study reports the role played by N-glycosylation in the host and SARS-CoV-2 during in vitro infection, as well as the results of inhibition of host N-glycosylation.

Either partial or complete blockage of host N-glycosylation inhibits SARS-CoV-2, thus impeding normal infection progression. Many mechanisms have been postulated, from defects in key surface receptors that prevent viral invasion through defects in normal viral protein/virion production to reduced infectivity.

Knockdown of crucial enzymes in the N-glycosylation pathway led to a reduction of infection by more than half. However, enzymes were specific in their effects in culture and favored different cell types.

Secondly, the use of inhibitors to block these enzymes, at several steps to mimic early and late knockdown, leads to a protective effect against the infection when tested in Calu-3 cells derived from human lung epithelial cells. At all doses of SARS-CoV-2 except the highest, and when added up to four hours from virus inoculation, these inhibitors reduced the infection.

This suggests that glycosylation inhibitors are effective at reducing the spread of the infection but not the initial invasion round.”

Both genetic and chemical knockdown led to altered N-glycosylation profiles; however, there were differences in the response to each of the agents used. Cytotoxic or metabolic toxicity was ruled out as a reason for the observed reduction in infections.

When Vero cells, HEK cells, and Calu cells were compared, infection rates were reduced with over 97%, 92% and 88-100% protection, respectively, using agents tunicamycin and NGI-1, which removed N-glycans. Cytopathic effects (CPE) were also inhibited by 94% and 100%, respectively, while, at high doses, infectious particles were undetectable in the cell supernatant.

Less effectiveness was observed with ER α-glucosidase inhibitors, which altered the structure of N-glycans. However, overall reductions were achieved in infections, CPE, and viral titers in the supernatant.

At a still later stage of glycosylation, Golgi α-mannosidase inhibition reduced HEK cell infections but not in Vero cells, perhaps because the two cell lines have different N-glycosylation profiles and glycosylation enzyme expression. For example, defective glycosylation by the ER α-glucosidases in the presence of these agents could be overcome by the Golgi endo-α-1,2-mannosidase (MANEA) alternative pathway.

Abnormal N-glycosylation patterns were found with all inhibitors; however, the profile was unique with each type of agent and, within the α-glucosidase inhibitors, with each separate compound. Treated cells showed more marked changes following infection compared to the greater than 40% reduction in N-glycans seen with untreated infected cells, which was attributed to the combination of inhibitor-infection effects.

The infected and treated cell supernatants contained almost 400-fold fewer infective viral particles as compared to untreated cells when treated with STT3 inhibitor NGI-1. Furthermore, total viral ribonucleic acid (RNA), representing both infective and non-infective particles, was reduced by 82-fold. This discrepancy suggests the synthesis of defective and non-infective virions due to the effect of the inhibition of N-glycan synthesis.

This was shown to be the case, with four-fold lower rates of infection by virions released from these cells. If the cell culture was pretreated with this inhibitor, the rate of infection by these defective virions was still lower.

Two of these sites within the RBD were thought to be the likely cause of defective infection. However, initial viral entry into the cell was unaffected by the removal of host cell surface glycoproteins before virus inoculation.

Inhibitors of N-glycosylation of the host cell do not prevent SARS-CoV-2 invasion. However, removal of the N-glycosylation of newly formed viral proteins affects the maturation and production of infective virions, thus preventing productive infection of the host cell. The removal of N-glycans from the cells causes fewer and more defective virions to be released with missing or aberrant N-glycans on the spike.

Altering host N-glycosylation leads to a significant reduction of the spread of SARS-CoV-2 infection.”

When early steps in the pathway were targeted, the effect was strongest, with infection spread and infective virion production being reduced.

Inhibitors of ER α-glucosidases I and II are well-tolerated, with some of these medications already being approved for use by the United States Food and Drugs Administration (FDA) for other conditions. Thus, these drugs could potentially be repurposed for SARS-CoV-2 infection if found to be useful. Though these agents were less effective than STT3 inhibitors, this could be due to Golgi membrane MANEA.

However, since human lung cells lack MANEA, these agents could still retain clinical utility, particularly if used in combination. The mechanism of action could be due to alterations in the glycosylation profile or the buildup of viral proteins within the ER due to misfolding. Late-stage alterations within the Golgi membranes were the least effective.

All SARS-CoV-2 variants of concern (VOCs) were equally impacted by the inhibitors of glycosylation. The evidence presented here could allow N-glycosylation inhibition to be explored as a new independent therapy against SARS-CoV-2. Furthermore, these agents could be used to enhance the efficacy of current COVID-19 vaccines, as defective glycosylation may render SARS-CoV-2 more susceptible to neutralizing antibodies induced by vaccines.

Moreover, N-glycans on essential proteins are unlikely to be easily mutated, which may make this approach more favorable to the development of therapies.

Altogether, the study of N-glycosylation in relation to viral diseases may offer new opportunities to fight not only SARS-CoV-2 but future coronaviral outbreaks.”

Scientists from the Medical University of Vienna, Austria, have recently evaluated the cross-neutralizing potency of serum samples collected from coronavirus...

Incidence of post-surgical complications before and during COVID-19 pandemic

In a recent study published on the preprint server medRxiv,* scientists compare post-surgical complications before and during the coronavirus disease...

The EU project CORONADX has published a leaflet with a collection of common misconceptions on COVID-19 diagnostic tests to help...

A booster dose of mRNA vaccine significantly decreases the risk of being infected with either the delta or omicron COVID-19...