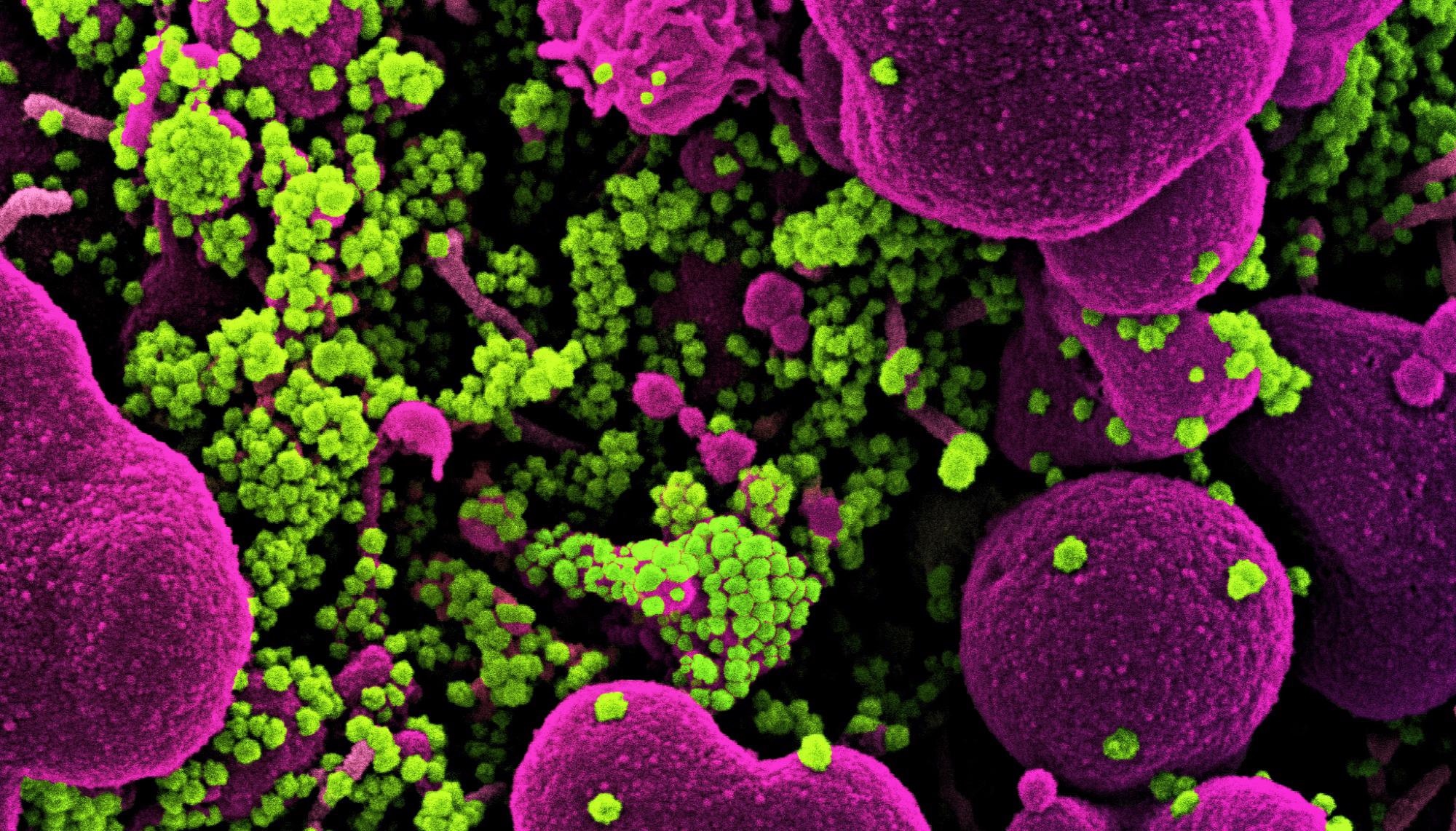 Vaccination against severe acute respiratory syndrome coronavirus-2 (SARS-CoV-2) has greatly alleviated mortality and morbidity in regions with high vaccination coverage and remains the most effective tool for ending the COVID-19 pandemic. However, the recent global surge of COVID-19 infections soaring to new record highs has been concerning, given that the number of breakthrough cases is also rising.

Besides neutralizing and binding activities, antibodies mediate a host of immune functions recruiting several components of the immune system using the complement and fragment, crystallizable (Fc) receptors. Fc-mediated effector functions are implicated in protection against anthrax, influenza, human immunodeficiency virus (HIV), and more recently against SARS-CoV-2. Notably, these effector functions mediated by Fc receptors have been implicated in decreasing COVID-19 severity rather than transmission.

The authors investigated whether the Fc profiles were similar across the two subsets of participants. First, they analyzed the wild-type SARS-CoV-2 (D614G) receptor-binding domain (RBD)-, N-terminal domain (NTD)-, spike (S) protein-, S1- and S2-specific antibody titers, Fc receptor (FcR) binding, and Fc-mediated effector functions. The immune responses were robust across the two subsets of the cohort. 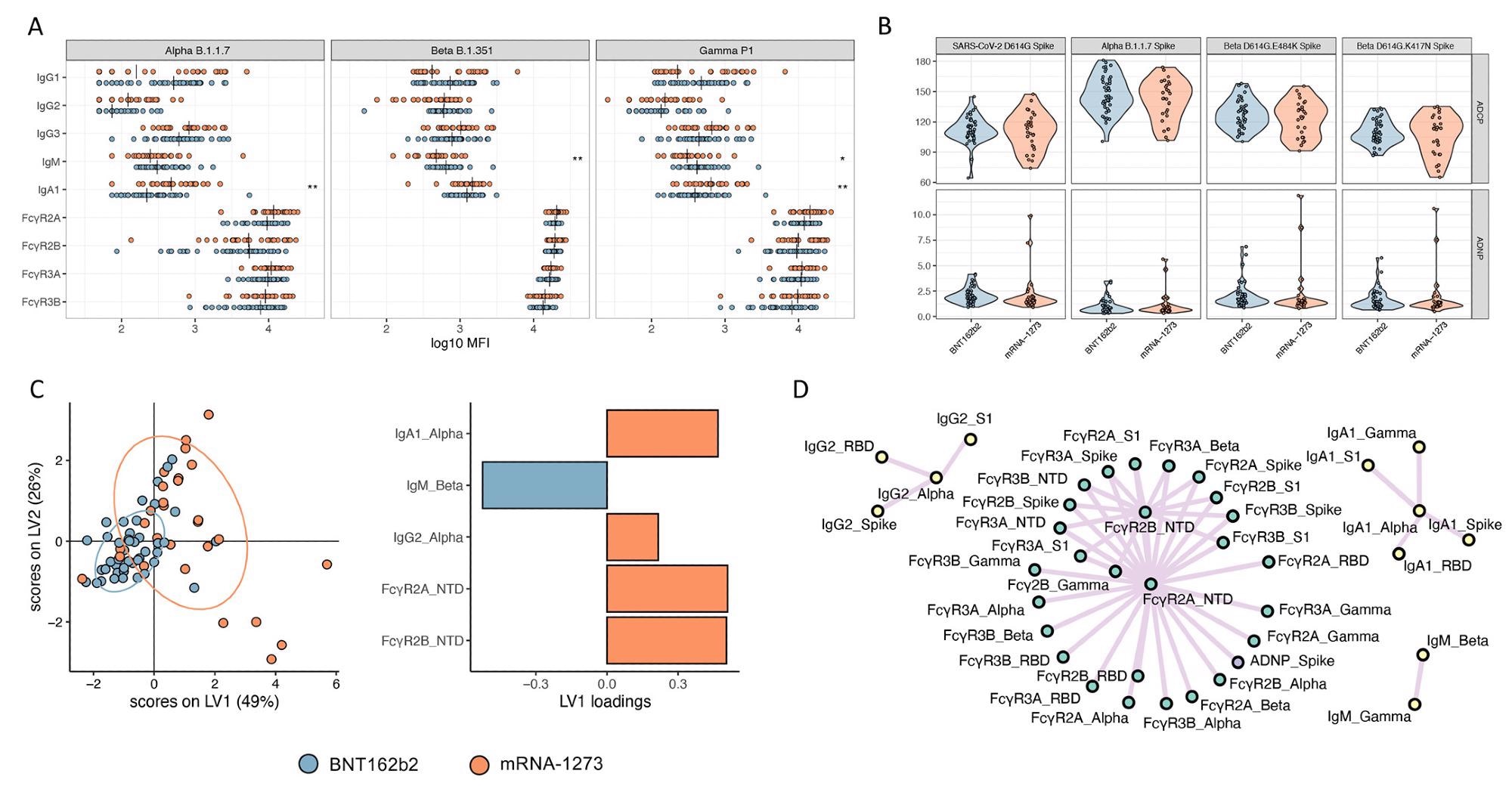 mRNA-1273 and BNT162b2 vaccines induce a comparable antibody profile across Alpha, Beta, and Gamma SARS-CoV-2 VOCs. (A and B) Univariate comparisons of (A) antibody titers and FcγR binding for SARS-CoV-2 Alpha, Beta, and Gamma VOCs as well as (B) ADCP and ADNP activity are shown for BNT162b2 (blue) and mRNA-1273 (red) vaccinated individuals. Vertical bars in (A) depict median values. Mann-Whitney U-tests corrected for multiple comparisons with the Benjamini-Hochberg (BH) method were used. Adjusted p-values are indicated as ***p < 0.001, **p < 0.01, and *p < 0.05. (C) A LASSO-PLSDA model is shown including all variant measurements. LASSO selected features were ranked based on their Variable of Importance (VIP) score, and the loadings of the latent variable 1 (LV1) were visualized in a bar graph. (D) A co-correlate network of the LASSO-selected features was built using a threshold of absolute Spearman rho greater than 0.7 and BH-adjusted p-value lower than 0.01. Nodes were colored based on the type of measurement; titers are shown in yellow, FcγRs are shown in green, and functional measurements are shown in gray. All shown links are positive correlations.

Further, multivariate analyses were conducted to identify the vaccine-specific signatures, which revealed that overall, robust humoral responses were common to both the sub-cohorts; IgA immunity, NTD recognition, and specific antibody effector functions were enhanced in the mRNA-1273 vaccinees than in the BNT162b2 vaccinees.

Although the mRNA vaccines exhibit remarkable efficacy against SARS-CoV-2 D614G, several variants that compromise the neutralizing activity have appeared. The researchers noted that antibodies elicited by either mRNA vaccine were equally bound to Alpha, Beta, and Gamma variants of concern (VOCs). However, the IgM titers specific to the Beta and Gamma VOCs were elevated in the BNT162b2 recipients in contrast to the high IgA titers against the Alpha and Gamma VOCs in the mRNA-1273 vaccinees. Nonetheless, FcR binding was comparable across both the sub-cohorts for the three VOCs.

Next, antibody responses were profiled and compared across 16 mRNA-1273 vaccinees, 15 BNT162b2 vaccinees, and 10 convalescent persons. Vaccine-induced IgG1 and IgG3 responses were higher than the infection-acquired responses against D614G RBD and RBDs of all the tested VOCs (Alpha, Beta, Gamma, Kappa, and Delta); antibody binding to D614G RBD was superior compared to the VOC RBDs. The VOC-reactive antibodies elicited by the vaccines exhibited superior FcR binding than the infection-induced antibodies. The spike-specific IgG1 and IgG3 antibodies showed enhanced binding to full-length spike antigens from all the VOCs except the Kappa than the D614G variant. Interestingly, convalescent individuals had lower binding IgG responses specific to the spike protein than mRNA vaccinees indicating that FcR binding to full-length spike proteins was stable.

In summary, the study probed the humoral responses elicited by two mRNA vaccines and observed distinct, robust Fc-functional responses by the vaccines indicating that the Fc-mediated effector responses could have a potential role in offering protection against disease caused by VOCs. Higher IgA titers, ADNP, and ACNKA activities were observed in mRNA-1273 vaccine recipients. RBD-specific antibody depletion had no significant effect on Fc-mediated effector functions among the vaccinees, while convalescent samples were affected by depleting RBD-specific antibodies. Overall, the depletion of RBD antibodies revealed the distinct roles of non-RBD effector functions, which might offer insights into the potential differences in immunity conferred by mRNA vaccines.

In a recent study published in the International Journal of Molecular Sciences, researchers identified and validated multiple linear B-cell epitopes...