A new study published on the preprint server medRxiv* tracks the fluctuations in viral load in people recently infected with the severe acute respiratory syndrome coronavirus 2 (SARS-CoV-2). To this end, the researchers concluded that early specimen collection may indicate that samples from a period before cycle threshold (Ct) values start to rise. 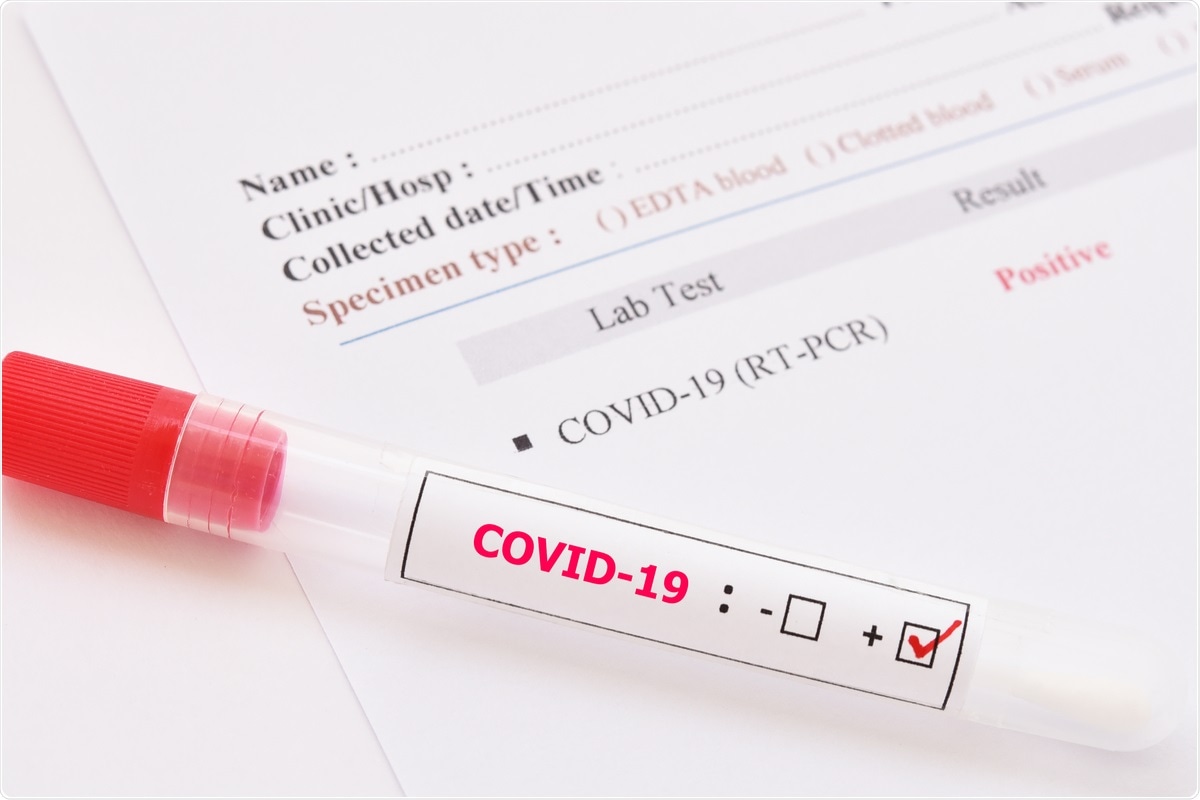 The onset of the coronavirus disease 2019 (COVID-19) led to terms like reverse transcription-polymerase chain reaction (RT-PCR) and Ct values becoming common in everyday conversation. Ct values are a measure of the viral load in the sample used for RT-PCR and refer to how many amplification cycles are needed before a target gene present in the sample reaches detectable levels.

According to the authors of the current study, the Ct value is more accurately a measurement of the viral ribonucleic acid (RNA) concentration of the viral RNA in the sample. Being easily and extensively available, Ct values are often compared between patients or between communities to understand how they correlate with patient characteristics and severity of illness.

Ct values can vary according to the type of sample, assay type, quality of the sample, and the time point during the course of infection. Sometimes, consecutive specimens are used over time to reduce this variability; however, longitudinal sampling would better help track the natural course of the illness or infection, especially at the population level.

The current study discusses RT-PCR values in newly infected people, with daily samples taken from household to household at multiple sites in a prospective manner. The Ct values were then correlated with age and symptoms.

The current study was conducted in various communities throughout Tennessee and Wisconsin between April 2020 to May 2021. The first patients had tested positive for SARS-CoV-2 by RT-PCR that was requested by the physician or other healthcare attendant. These patients were outpatients and lived with one or more individuals at the time.

Household contacts were identified and followed up within six days from the onset of symptoms in the first patient, with daily swab collection and symptom diaries covering 16 symptoms for 14 days. Anterior nasal swabs were collected by self or parents, with two tests returning Ct values of 39 or less being the criterion for inclusion as positives.

There were about 580 household contacts from about 300 households included in the current study, of which 67 contacts from 50 households were incident cases. About 20% of individuals had underlying illnesses and over 90% were symptomatic. About 40% and 16% were 18-49 years and over 50 years, respectively, with over 25% under the age of 11 years.

Cases remained test-positive for a median of 10 days, which was also the median period of testing from the first positive test. The last specimen collected remained positive in about 60% of cases. Most patients were tested on the same day as symptom onset, with about half of symptomatic cases becoming positive after symptoms began.

Once symptoms were first reported, the lowest Ct value occurred about four days later after the median positive test date, whereas in incidentally detected cases, the median time to lowest Ct value was three days. Among the over 90 specimens that were subjected to culture from 13 individuals, a positive culture was linked to lower Ct values at about 27 as compared to greater than 28 for culture-negative specimens.

Children and adolescents had much higher Ct values as compared to adults by approximately 3.5, whereas those aged 50 years or more had lower Ct values by about -2 as compared to those between the age of 18 and 49 years. Symptomatic days were linked to lower Ct values, including days on which any of a wide range of symptoms occurred; however, this trend was not observed when abdominal pain, vomiting, or changes in taste and/or smell were reported. 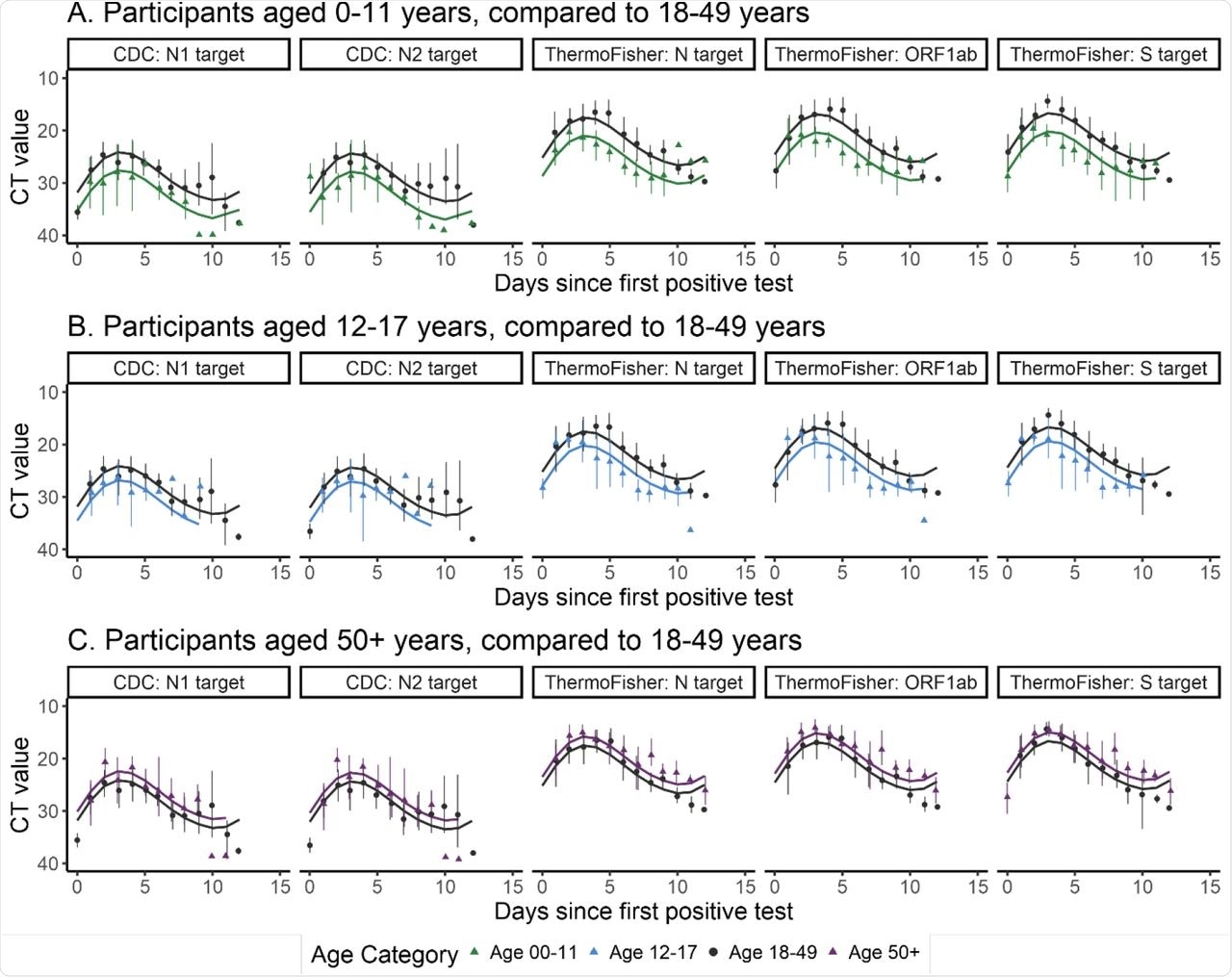 Ct value curves over time since each participant first tested positive against each target, within age groups. Dots represent mean observed values within age groups, and vertical bars show bootstrapped 95% confidence intervals. Smooth lines represent predicted values from the Generalized Additive Model of Ct values over time, accounting for age and repeated measurements. Panel A shows results from participants age 0-11 (triangle) compared to the reference group, age 18-49 (circle); Panels B and C repeat this comparison with age 12-17 or 50+. Each plot from left to right represents a SARS-CoV-2 target from one of the two included testing platforms (CDC 2019-Novel Coronavirus Real-Time RT-PCR Diagnostic Panel or the ThermoFisher TaqPathTM COVID-19 ComboKit).

The study findings confirm that children and adolescents have a lower viral load than adults, while older adults have higher median Ct values. The findings apply mostly to the variants circulating before the Alpha variant emerged but corroborate earlier studies showing that PCR values shift with the type of assay and timepoint during infection. Some earlier studies have also shown that Ct values are lower in children under 5 as compared to older children; however, this difference requires further research.

Possible explanations for the study findings include variation in the time of collection with respect to the course of the infection, the variants in circulation at the time, the severity of illness, or the prospective design of the study.

The current study also shows that the days on which symptoms occur have lower Ct values, while the lowest values occur a median of four days after symptom onset. This indicates that viral RNA rises for longer than expected after symptoms occur.

Further studies will be required to show that incident cases did not account for a higher proportion of cases with delayed replication. Though Ct values do not directly correlate with viral loads and, therefore, the infectiousness of the patient, their directionality may indicate such a trend where these findings become more important in showing when patients are most infectious.

In the current study, specimens collected within four days of symptom onset may be more likely to come from a time point when Ct values are declining.

These findings contribute to our understanding of RT-PCR Ct values during SARS-CoV-9 2 infections. They may provide context for interpreting trajectories in Ct values in similar populations during later SARS-CoV-2 outbreaks.”

In a recent study posted to the Research Square* preprint server and under consideration at a Nature Portfolio Journal, researchers...

In a recent study posted to the bioRxiv* preprint server, researchers proposed an optimal system to generate severe acute respiratory...

Coronavirus disease 2019 (COVID-19) first arose in China, before spreading to nearly every country in the world. It has led...

Researchers from the Federal University of Para, Brazil, presented a systematic analysis of the affinity and conformational dynamics between the...

In a recent study posted to the medRxiv* preprint server, researchers determined the hospital stay lengths for coronavirus disease 2019...