Monitoring rodents for SARS-CoV-2 and other coronaviruses, Hong Kong

A novel coronavirus, namely, severe acute respiratory syndrome coronavirus-2 (SARS-CoV-2), was first reported in Wuhan, China, in late 2019. The subsequent rapid global outbreak of SARS-CoV-2 was declared a pandemic, by the World Health Organization (WHO), in March 2020. This pandemic is popularly known as coronavirus disease 2019 (COVID-19). 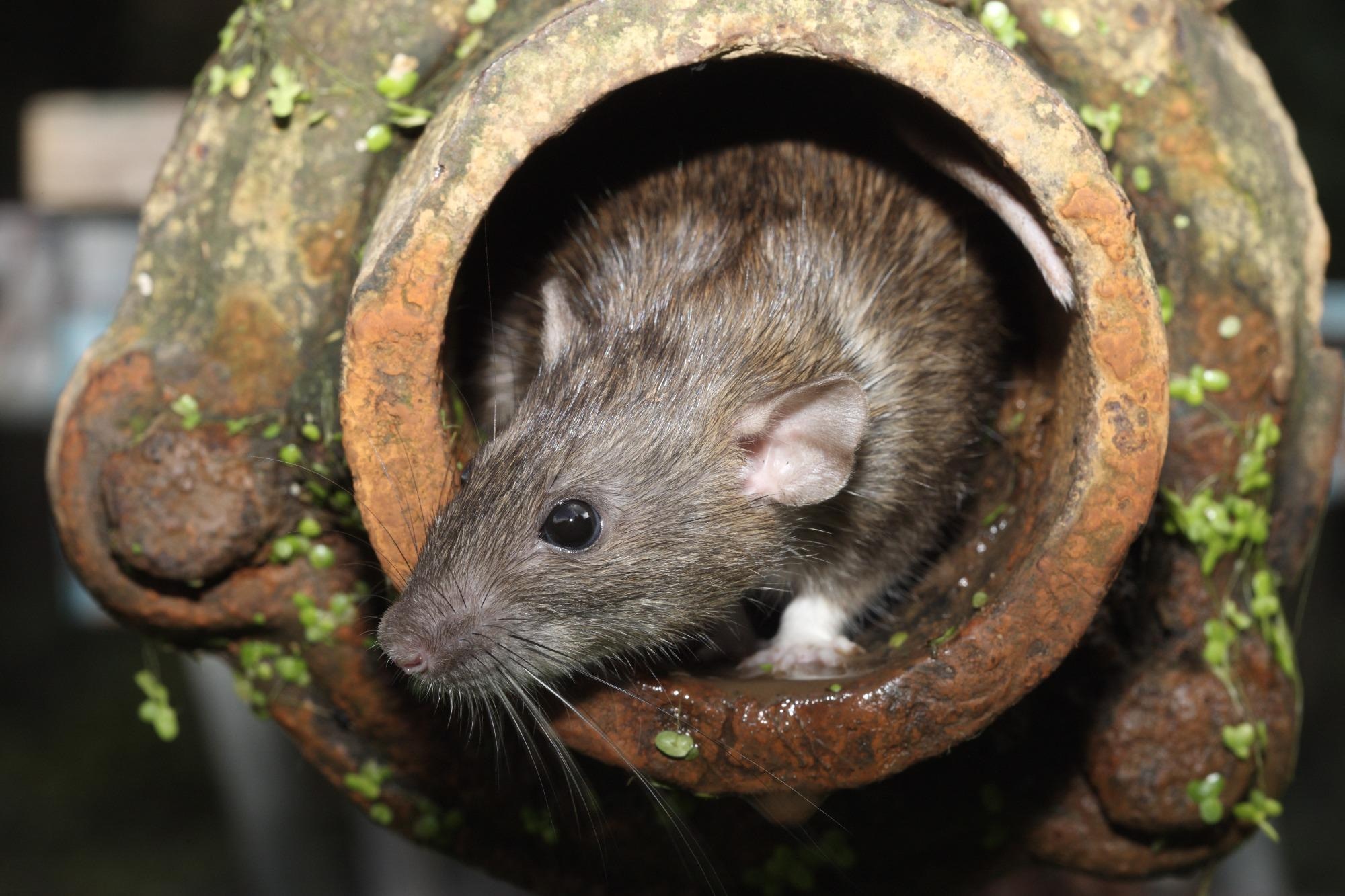 Researchers characterized SARS-CoV-2 as a highly virulent and transmissible RNA virus belonging to the family Coronaviridae. Even though the zoonotic origin of this virus remains unclear, researchers have determined animals that are susceptible to reverse-zoonotic transmission, i.e., the transmission of SARS-CoV-2 from infected humans to animals. Some animals vulnerable to reverse-zoonotic transmission are cats, minks, deers, and dogs. Minks maintain a high viral load among these animals and could be a potential source for future spillback to humans. In addition, scientists revealed that urban wildlife and domestic animals are at an increased risk of SARS-CoV-2 infection as they are highly exposed to viruses shed within urban environments.

The spike (S) protein of the SARS-CoV-2 virus binds to the angiotensin-converting enzyme 2 (ACE2) receptor of the host to establish infection. Therefore, scientists have analyzed the presence and frequency of ACE2 receptors across diverse vertebrates, which could positively help identify mammals that are prone to COVID-19 infection and, thereby, could pose a threat of future spillback to humans.

Since the beginning of the pandemic, SARS-CoV-2 has evolved due to mutations. The newly emerged SARS-CoV-2 variants have been classified as variants of concern (VOCs) and variants of interest (VOIs). Among the VOCs, the Alpha (B.1.1.7), Beta (B.1.351), and Gamma (P.1) variants contain N501Y, i.e., an amino acid residue changes in the receptor-binding domain (RBS) of the S protein. Interestingly, a similar mutation has been observed in BALB/c mice. This observation was further confirmed by recent in vitro and in vivo experiments that revealed that VOCs could infect laboratory rats and mice. Researchers stated that these evolutionary changes enhance the possible risk of reverse-zoonotic transmission of VOCs into urban rodents. 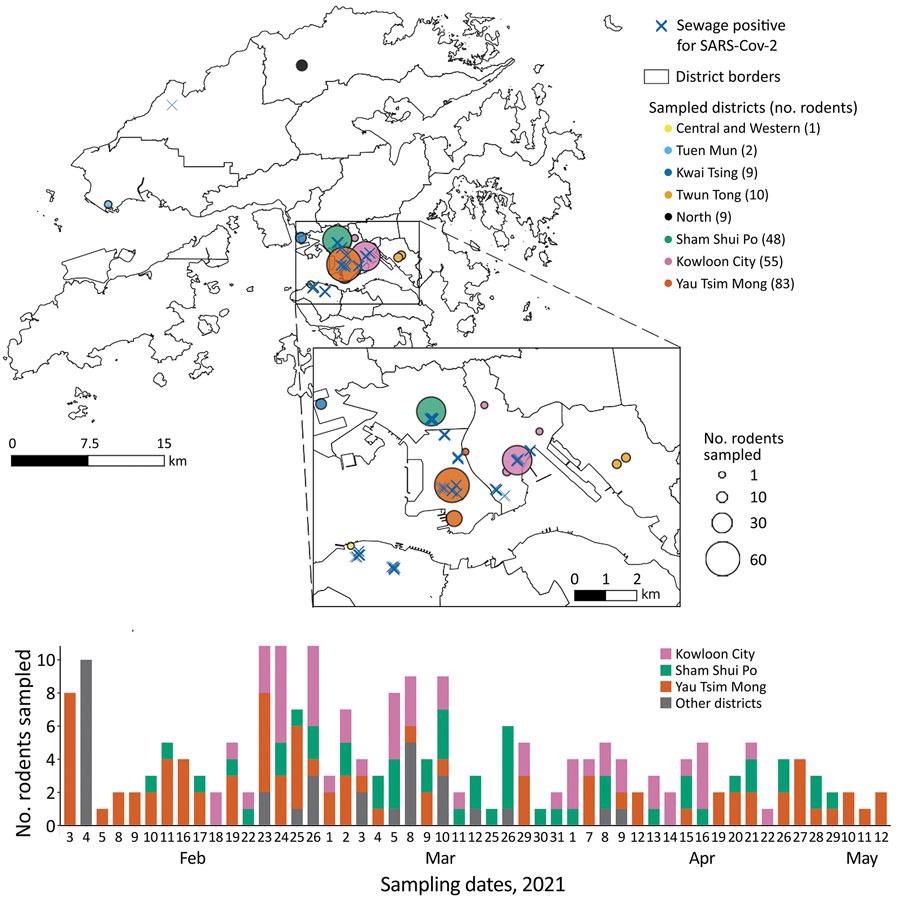 Surveillance of rodents for SARS-COV-2 conducted February–May 2021 in Hong Kong. A) Sampling sites, with the number of rodents sampled and sewage testing positive for SARS-COV-2. Each circle represents a sampling location, color-coded by district and sized proportionally to the number of captured rodents. Blue crosses represent locations where sewage was reported positive for SARS-COV-2during January 19–March 30, 2021. B) Number of sampled rodents, by collection dates and district. SARS-COV-2, severe acute respiratory syndrome coronavirus 2

A new study published in the Centers for Disease Control and Prevention’s Emerging Infectious Diseases journal has hypothesized that locations with positive SARS-CoV-2 in sewage could be used as potential surveillance targets to analyze if pestiferous urban rodents shed SARS-CoV-2 into the environment. In this study, scientists performed sewage surveillance in Hong Kong to detect hidden infections. In addition, they localized COVID-19 outbreaks during the fourth wave of SARS-CoV-2 infection in Hongkong. This study was conducted between February 3 and May 12, 2021.

Scientists sampled a total of 217 rodents (Rattus spp.), among which 193 were live-trapped rodents, and 24 were found dead near collection sites. Although samples were collected from eight districts, the majority were collected from Sham Shui Po, Yau Tsim Mong, and Kowloon City, where SARS-CoV-2 positive sewage has been reported. These samples represented 189 Rattus norvegicus and 28 Rattus tanezumirats.

1,702 swabs and tissues from the rodents were analyzed using real-time (RT)-PCR, which revealed the presence of murine alphacoronaviruses and betacoronaviruses. The ELISA test revealed that 1 out of 213 rodent serum samples (R. norvegicus rat collected in Yau Ma Tei) were seropositive to SARS-CoV-2. Eleven samples remained inconclusive, and three showed borderline absorbance. One rat showed SARS-CoV-2 positivity unambiguously. Among the eleven inconclusive samples (by ELISA method), all were later confirmed to be negative using the surrogate virus neutralization testing (sVNT) method. Rodent samples collected in 2008, as a part of a biological control test for cross-reactivity, were subjected to an ELISA test and none of the samples was unambiguously SARS-CoV-2 positive.

The authors believe that viral RNA was not detected during the rodent surveillance in Hong Kong due to the small sample size or prevalence of active infection being low. They further revealed that seropositivity in rodents to SARS-CoV-2 or other related viruses might not be linked to past infection to murine alphacoronaviruses or betacoronaviruses.

The authors revealed that before December 2020, SARS-CoV-2 had lower infectivity among rodents which changed as the pandemic progressed and more new variants emerged. They found that VOCs containing 501Y mutations can infect mice. The imported COVID-19 cases, which might be present near quarantine hotels, present the risk of spillover into urban rodent populations. Thereby, biosecurity must be increased to prevent reverse-zoonotic transmission of SARS-CoV-2 to rodents and other susceptible animals. Scientists believe that early detection would prevent the establishment of new viral reservoirs.