In a recent research article published in the journal of Science Immunology, a team of researchers from Japan performed longitudinal analysis on the cellular composition of receptor-binding domain (RBD) memory B cell subsets and its antibody binding and neutralizing activity against the Beta, Delta, and Omicron variants following the second dose of a messenger ribonucleic acid (mRNA) vaccine.

The current research work focused on measuring the memory B cell breadth against the Beta and Omicron variants and the temporal shift in the memory B cell subset composition over time following two doses of an mRNA vaccine. 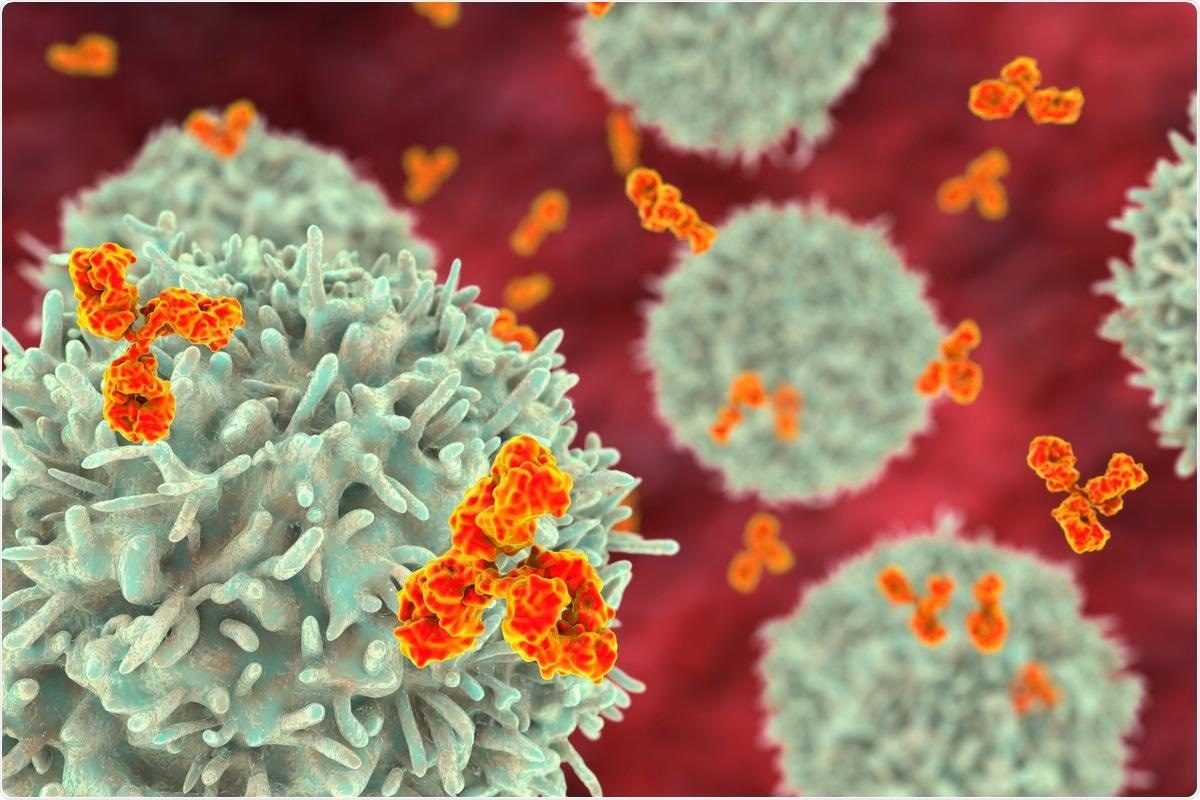 The study protocol involved the participation of  45 healthcare workers post receiving two doses of the mRNA vaccine BNT162b2 (Pfizer-BioNTech). The circulating antibodies and memory B cells in the peripheral blood at the early (31 days) and late (146.5 days) time points after the second vaccine dose were measured. The concentration of RBD binding immunoglobulin G (IgG) and IgA antibodies titers in plasma was quantified by electrochemiluminescence immunoassay (ECLIA). The neutralizing antibody titers against the Beta and Delta variants were determined by the microneutralization test (MNT) and that against the Omicron variant by the pseudovirus neutralization test (PV-NT) assay.

The researchers observed after one month that two doses of the mRNA vaccine strongly increased Wuhan RBD IgG titers to more than 2000-folds compared to the pre-vaccination level. Beta variant neutralizing antibodies decreased to a lesser extent compared to Wuhan and Delta, while Omicron variant neutralizing antibodies were highly reduced compared to other variants. NBI was increased to two-fold, and 2.8 fold against the Beta variant but no increase was shown against the Delta variant. 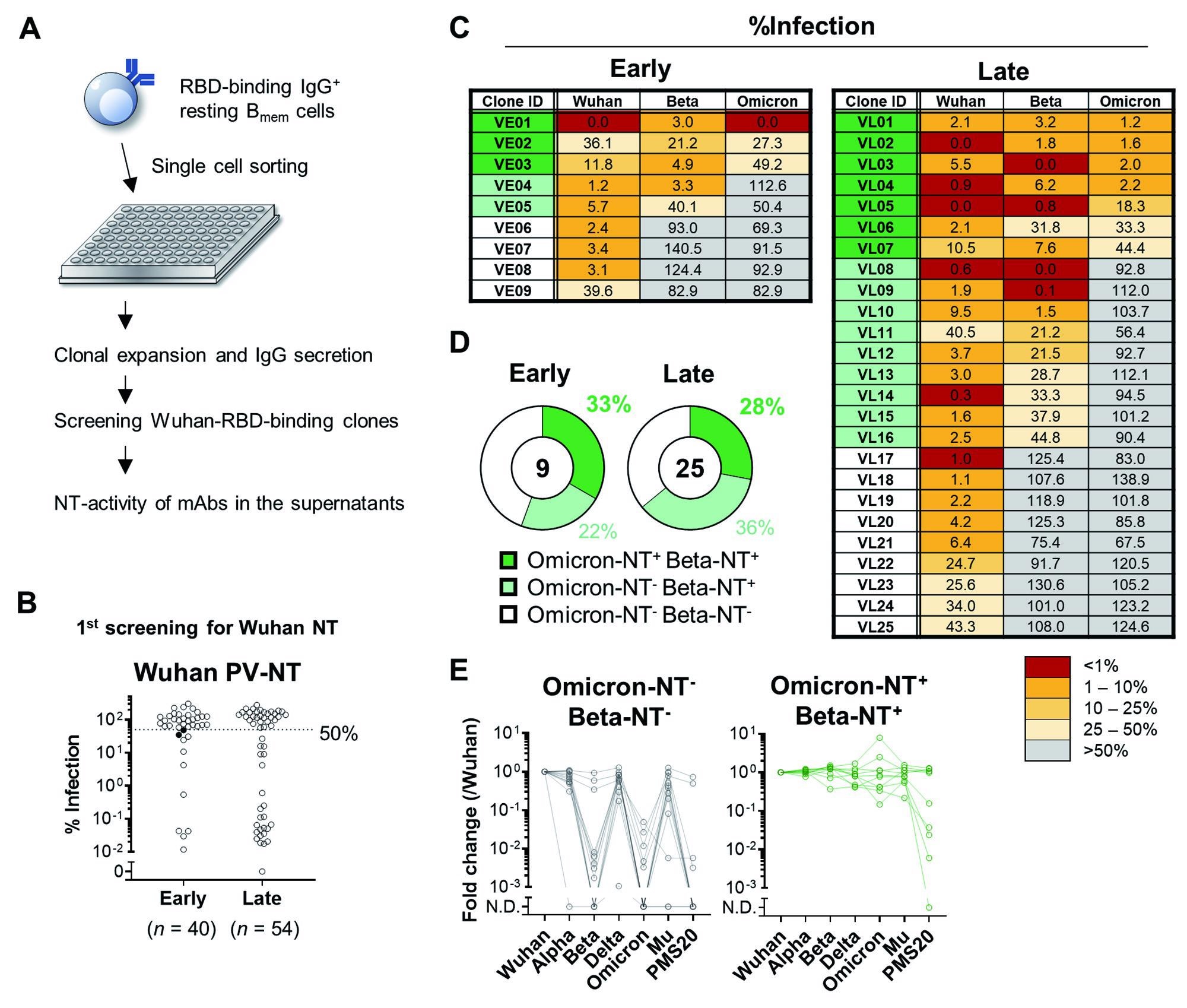 The researchers observed a reduction in IgG antibodies in the vaccinated individual, while there was an increase in the level of RBD-binding IgG+ B cells to 1.8 fold since early to late time points compared to IgA+ and IgM+ B cells, which were less persistent. CD27+ gating decreased numbers of IgM+ B cells to 2.4 to 3.2-fold compared to those before the gating; however, the IgM+ cells were less prominent than IgG+ cells.

The study results showed that the majority of IgG+ memory B cells bound to RBD were reactive against the RBD variants of Beta and Delta. At early time points, Omicron reactivity was also observed in these cells which increased from 38% to 52% in the resting memory B subsets.

IgG derived from memory B cells retained the neutralizing effect against Beta and Omicron variants.

All the Wuhan-specific neutralizing clones poorly bind with the Omicron RBD but positively associate with Alpha, Delta, and Mu variants. The majority of these clones did not bind to Beta RBD except for three clones – VE08, VE09, and VL22. Two clones – VE08 and VE09 – bound polymutant spike protein 20 (PMS20) and reflected the broad RBD binding of these clones but not for Omicron RBD. Moreover, at least half of the Omicron-specific neutralizing clones showed high affinity to PMS20.

The current study results showed that two doses of the mRNA vaccine-elicited plasma neutralizing antibodies with limited activity against Beta and Omicron but induced an expanded antibody breadth over time. While more than one-third of RBD-binding IgG+ memory B cells with a resting phenotype initially bound the Beta and Omicron variants and steadily increased the B cell receptor (BCR) breadth over time. Resting memory B cells subset secreted Beta- and Omicron-neutralizing antibodies when stimulated in vitro.

Taken together, the findings supported the potential role of vaccine-elicited memory B cell subsets to the neutralizing breadth of recall antibodies following the third mRNA vaccine dose or non-Omicron breakthrough infection.

In a recent study posted to the bioRxiv* pre-print server, researchers evaluated the importance of the Ex3Lx6L (E-L-L) motif in...

The role of FTIR in protein analysis and biomedical applications