The growth of proteomics from genomics to a separate experimental field has emphasized the significance of acquiring information relative to a given protein’s activation state. This information can usually be acquired by evaluating the protein’s post-translational modification status – specifically, its phosphorylation state.

The problems that arise when producing high specificity and sensitivity affinity reagents specific for phospho-epitopes in adequate quantities limit the scope of diagnostic and research assays, where several phosphorylation states need to be probed simultaneously.

To tackle this reagent shortage, a series of high-throughput methods were developed at the EMBL Monoclonal Antibody Core Facility in Montorotondo, Italy. These methods used robotic liquid handlers to conduct somatic cell fusions at the rate of eight reactions per week – one or two is the standard – on lymphocytes adapted from antigen-primed mouse spleens to produce classical hybridomas.

These eight fusions produced 15,360 different samples to be tested by an affinity capture assay such as ELISA.

Successful screening for specificity contra to a phospho-epitope necessitates probing both the phosphorylated and unphosphorylated peptide form and a third, unrelated target, which has an equivocal phosphorylated amino acid present in a separate primary sequence context.

This method makes sure that only specific cell lines relevant to the amino acids are isolated but triples the number of capture assays needed to 46,080. Additionally, these assays must be concluded within 48 hours to facilitate the isolation of antibody-generating cell lines before exhausting the growth medium.

These collective issues push throughput requirements past the capabilities of a conventional plate-based ELISA, as the screen would necessitate the 480 96-well plates to be processed.

First step to the solution

The most recent parallel assay technology to emerge is the microarray. The potential to conduct a single test and simultaneously acquire tens or hundreds of thousands of data points made microarrays a potential solution to effectively manage throughput.

An innovative antigen microarray assay was recently developed by EMBL in which a single peptide-coated glass microscope slide per test antigen (phosphorylated, unphosphorylated and irrelevant peptide) would be printed with the cell culture supernatants from each fusion.

Only 24 slides would be required for eight fusions, at three slides per fusion, while sustaining the same level of screening complexity. Early screens using microarrays generated on a contact microarrayer were shown to be problematic.

Inconsistent contact deposition required triplicate printing of each supernatant; as the maximum spot density per slide was 17,280, it was only possible to spot three fusions onto each slide in a single print run (5,760 spots were required per fusion).

This factor restricted print-run length and led to a considerable decrease in unattended operation time while increasing manual intervention.

Consequently, to address the aforementioned issues, a high-throughput noncontact microarrayer, the Super-Marathon Inkjet Microarrayer from Arrayjet, was employed. The Super-Marathon has the capability to generate microarrays from up to 48 microtitre plates on up to 100 slides while handling up to 32 samples simultaneously without user intervention.

The instrument was fitted into an enclosed, HEPA-filtered environment with temperature and humidity control, preserving optimum conditions for microarray production increased efficiency and productivity.

Moreover, due to an increase in the quality of the microarrays generated, it was no longer necessary to print supernatants in triplicate.

Finally, the application of custom-designed multiple print run capability within Arrayjet’s Command Centre™ software facilitated the division of each print run into a number of sub-print runs, effectively rendering printing each supernatant on each slide unnecessary.

Therefore, the EMBL group could conduct a single, high-speed print run on the Super-Marathon rather than what had previously necessitated three low-speed print runs on their contact microarrayer.

Preparation of a hybridoma cell line was performed by selecting and fusing splenocytes from one of two CD1 mice, each of which was immunized with a serine-phosphorylated synthetic peptide paired with diphtheria toxoid as a carrier protein.

The animal with the highest serum titre – identified by ELISA 10 days after each immunization – was chosen for fusion eight weeks post-immunization. Fusions were automated employing a suite of cell culture robotics and dispensed into 20 96-well tissue culture plates in accordance with standard protocols.

After two weeks of incubation at 37 °C, a robotic liquid handler transferred 40 µL of culture supernatant from each well of the 96-well plates into the 384- well plates intended as source plates for the Super-Marathon.

Simultaneously, a further seven fusions were conducted in an equivalent fashion, using various protein and peptide targets. Glass microscope slides were coated with an aminosilane to facilitate the binding of the peptide antigens to the slide surface.

Three aminosilane-coated chips were subsequentially coated with a monolayer of each of the three peptides: one phosphorylated, one unphosphorylated and one irrelevant peptide that included a phospho-serine moiety.

Protein and peptide chips from each of the extra seven fusions were prepared in a similar fashion. The peptide and protein chips were then placed on the Super-Marathon and 40 x 384-well plates with lids and placed in the Microplate Stacker.

A Multiple Print Run definition allowed for the printing of the specified supernatants printed on the designated slides in a single, automated overnight print run. Each slide was washed and incubated with a fluorophore-labeled antimouse antibody, washed again and visualized with a fluorescence microarray scanner.

The phospho-peptide, nonphospho-peptide and irrelevant-phospho-peptide chips were evaluated using standard software. Then comparative analysis was performed using a custom-made database to look for phosphospecific signals.

By comparing the images of the three slides in the phospho-specificity test fusion, it was possible to isolate the hybridomas that generated antibodies specific for the phospho-peptide (Figure 1). 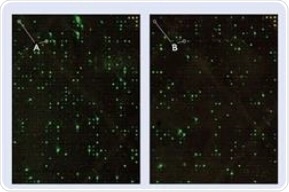 The enhanced microarray quality simplified and expedited the analysis (Figure 2) while facilitating the rapid and simultaneous screening of the supernatants from the seven other fusions. Clone selection and isolation were finished within 36 hours of initiating the microarray assay (data not shown). 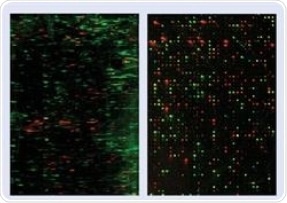 Figure 2. A comparison of a typical protein chip spotted with 32 fixed pins (left) with the typical spotting pattern of the Arrayjet Super-Marathon.

To produce high-quality antibodies in the most efficient manner possible, sturdy systems for high-throughput hybridoma production and screening are completely necessary.

The Super-Marathon Inkjet Microarrayer has demonstrated the ability to enhance the speed and robustness of the manufacture of the screening assay due to its reliability, flexibility and quality of the microarrays it generates.

This is especially useful when trying to raise matching pairs of monoclonals for sandwich assays, such as ELISA, multiplex bead assays, proximity ligation assays and for protein quantitation.

The proprietary printing technology is fully automated and delivers benefits of ease of use, precision, reproducibility, efficiency of manufacture, and total process-control.

Arrayjet’s patented technology simultaneously aspirates and prints multiple samples on-the-fly. This is a proven platform and its non-contact bioprinting is ideal for microarray and 96 well microplate manufacture; as well as bioprinting onto biosensors, biochips, MEMS devices, microfluidic devices, membrane sheets and into nanowell applications. Most substrates are compatible with the technology.

Arrayjet instruments offer the largest manufacturing batch size of up to 1000 slides, allowing over 18,400 samples to be loaded at once. The instruments are modular and scalable, enabling customers to increase capacity as their requirements grow. They combine the fastest and most reliable instrumentation on the market with the versatility to print any biological sample type onto any solid substrate.

Recently, there has been a considerable increase in the advancement of the ‘ingestible beauty’ trend. However, a more common and...

Research may lead to the development of effective fasting-based therapies