Cancer is the second leading cause of death worldwide and is thus considered a truly global challenge. In 2022 alone, there will be 1.9 million new cancer cases and 609,360 deaths from cancer in the United States, according to estimates from the American Cancer Society.

Immunotherapy harnesses the immune system to fight cancer cells, unlike traditional cancer treatments such as surgery, chemotherapy, and radiotherapy, and has emerged as the forefront treatment (standard treatment) for many solid tumors, including lung cancer, melanoma, bladder cancer, and head and neck cancer.1

Researchers in industry and academia, inspired by the great success of PD-1/PD-L1 inhibitors, are collaborating on the identification of other novel target molecules like CD47, T-cell immunoreceptor with immunoglobulin and ITIM domains (TIGIT), and signal regulatory protein α (SIRPα) in order to maximize the efficacy of immunotherapy.

Thanks to its central role in limiting antitumor responses, TIGIT is an attractive target for cancer immunotherapy.2

Expressed on activated T cells and NK cells, TIGIT binds to CD155 on APCs and in various solid and hematologic tumors (Figure 1). A series of anti-TIGIT agents are currently undergoing clinical development for cancer therapy, as displayed in Table 1. 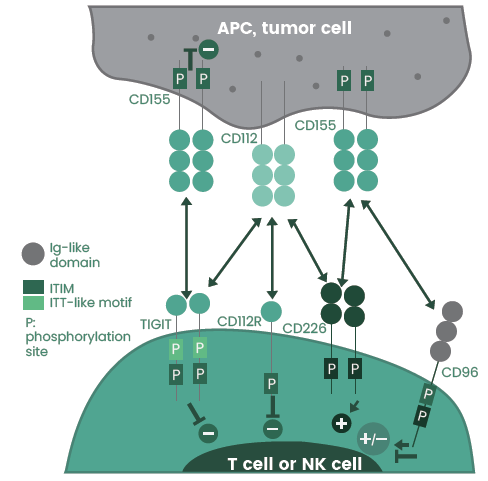 The most advanced stage of development (phase III) features tiragolumab, ociperlimab, and domvanalimab. A fully human IgG1 monoclonal antibody, tiragolumab is designed to bind TIGIT and block its interaction with CD155.

In January 2021, the FDA granted the combination Breakthrough Therapy Designation. Roche has continued to examine tiragolumab in the treatment of NSCLC despite its phase III failure in May 2022.

A humanized IgG1 antibody, ociperlimab with high affinity and specificity, binds to TIGIT. The comparison is between ociperlimab plus tislelizumab, versus pembrolizumab alone, in previously untreated patients with advanced NSCLC in a phase III trial (NCT04746924).4

Sino Biological provides high-quality TIGIT proteins from various species such as rats, humans, and cynomolgus monkeys (Figure 2) to support the discovery and development of TIGIT-targeting therapeutic agents). For researchers who want to conduct in-depth studies of the TIGIT axis, CD96, CD155, and CD226 proteins are also available. 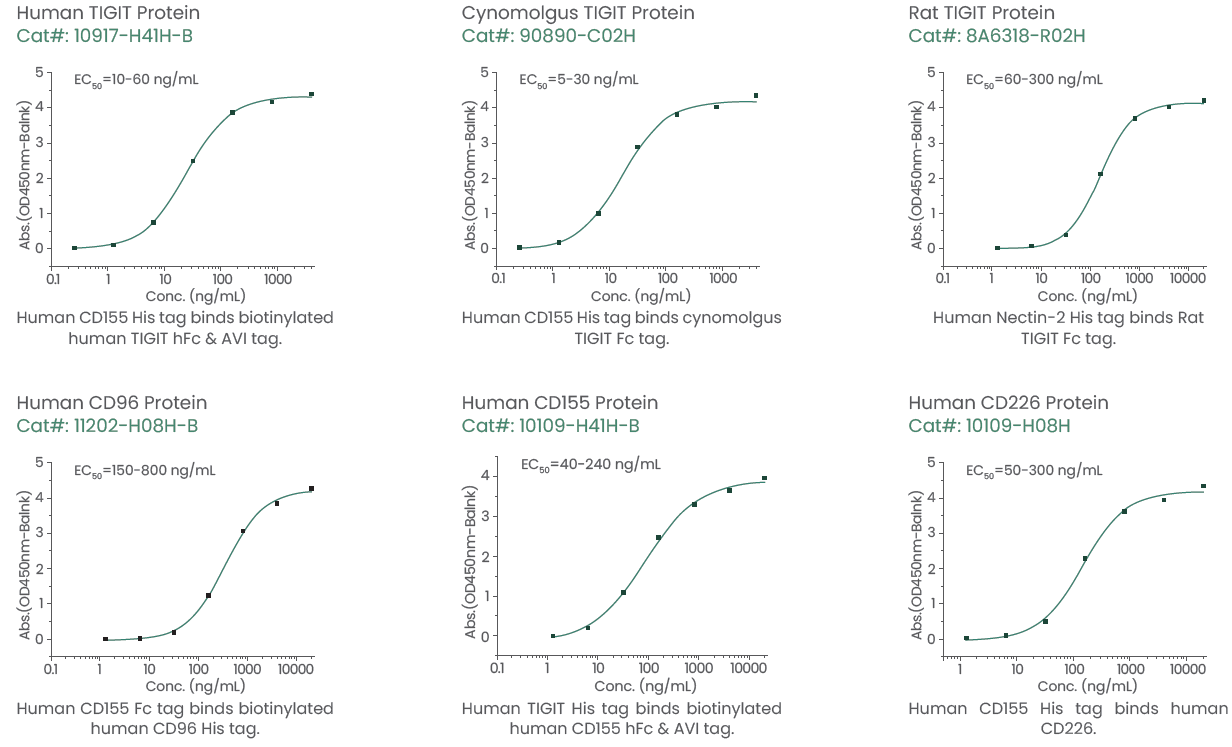 Blocking the CD47–SIRPα interaction is, therefore, an emergent and highly promising therapeutic strategy which may be used to promote antitumor immunity (Figure 3).

A range of CD47/SIRPα inhibitors, including anti-CD47 or SIRPα monoclonal antibodies, SIRPα–Fc fusion proteins, and bispecific antibodies (Table 2), have been developed and evaluated in clinical trials. However, there has not as yet been a therapeutic agent brought to market that blocks the CD47–SIRPα signaling pathway.

A humanized anti-CD47 IgG4 antibody, Magrolimab,  is currently in phase III development, which could be the first agent of its kind to gain approval.

Magrolimab plus rituximab produced overall and complete response rates of 49 and 21%, respectively, in a phase Ib/II study evaluating patients with non-Hodgkin’s lymphoma (NHL).6

Another CD47 mAb in phase III development, Letaplimab, is a specific blocker of the CD47–SIRPα axis. Letaplimab displayed a favorable toxicity profile without dose-limiting toxicities in a phase I study of patients with advanced solid tumors and lymphomas. Most of the adverse events were measured at grade 1–2 in severity, with an overall anemia rate of 15%, and only one patient experiencing grade 3 anemia.7

IBI322, in addition to letaplimab, is also being developed by Innovent Biologics. IBI322 is an anti-human CD47/PD-L1 bispecific antibody that can bind CD47+PD-L1+ tumor cells selectively, which therefore reduces the potential side effects that the CD47 blockade causes in healthy cells.8

In order to evaluate its safety, tolerability, and pharmacokinetics in patients with advanced solid tumors, IBI322 is currently under phase I development.

In a similar manner, TTI-621 effectively suppressed the growth of B lymphoma xenografts and aggressive acute myeloid leukemia.10 GS-0189 and CC-95251 are several of the anti-SIRPα monoclonal antibodies that are in the early stage of clinical development.

The IgV domain of SIRPα is highly polymorphic, and within humans, there are ten allelic variants. The most prevalent variants have been reported as SIRPα V1, SIRPα V2, and SIRPα V8, which are thought to account for more than 90% of all forms in the human population.11-12

SIRPγ is closely related to SIRPα but has a weaker affinity than SIRPα when binding to CD47 and is involved in T-cell responses.13

In the development of therapeutic antibodies, it is essential to assess the binding to various SIRPα variants. High-quality SIRPα V2, SIRPα V8, and SIRPγ proteins have been produced by Sino Biological, and Figure 4 presents the product data. Mouse, rat, and human CD47 proteins are also available. 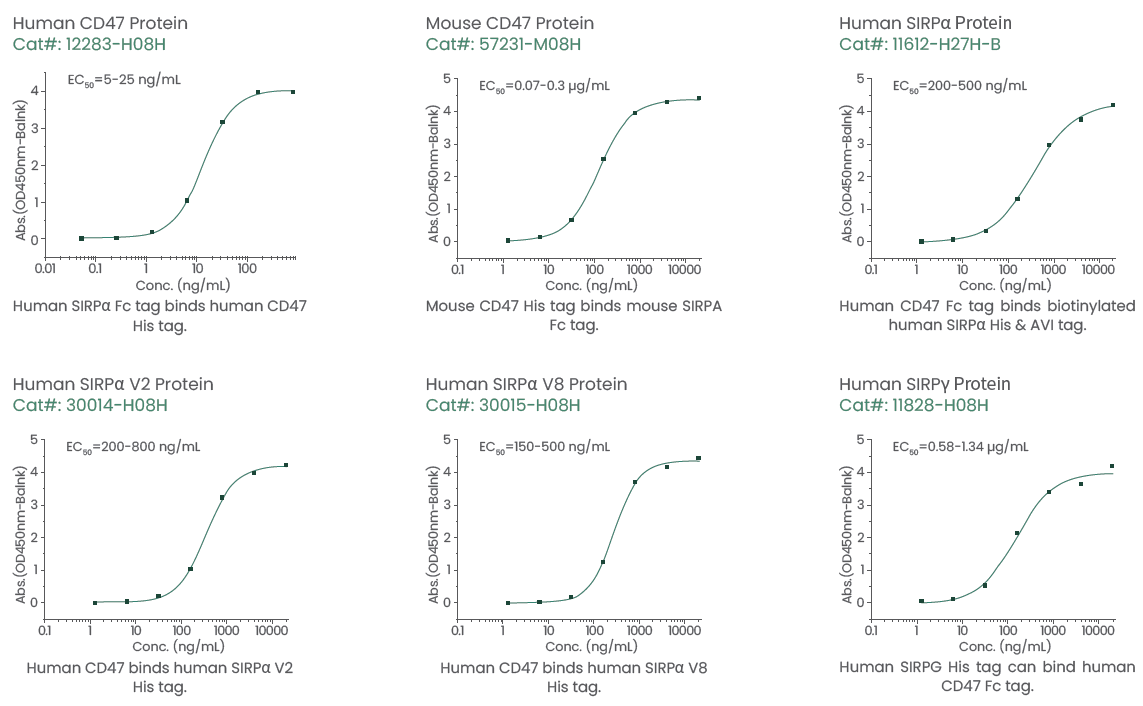 It must be said that cancer immunotherapy is a rapidly developing field in which there have been a number of recent significant advancements. Favorable antitumor efficacy and good safety profiles have been detected for both preclinical- and clinical-stage drugs14-15 that act upon other emerging targets, including TIM-3, VISTA, LAG-3, and CD27 (Table 3), in addition to the aforementioned targets.

A range of truly effective new treatment strategies is likely to be available to patients with cancer in the future, thanks to this continued exploration of novel therapeutic targets or combination strategies.

The concept of a ‘plasmid’ was first introduced by Joshua Lederberg in 1952. Since that time, it has become widely...

Clinical research frequently uses tissue that has been formalin-fixed and paraffin-embedded (FFPE). Due to the destructive nature of the formalin...

A thorough evaluation of the transcriptome is provided by high-resolution RNA analysis using next-generation sequencing (RNA-seq), enabling the measurement of...

The development of effective clinical trials is essential when exploring the link between the gut microbiome and the brain; for...