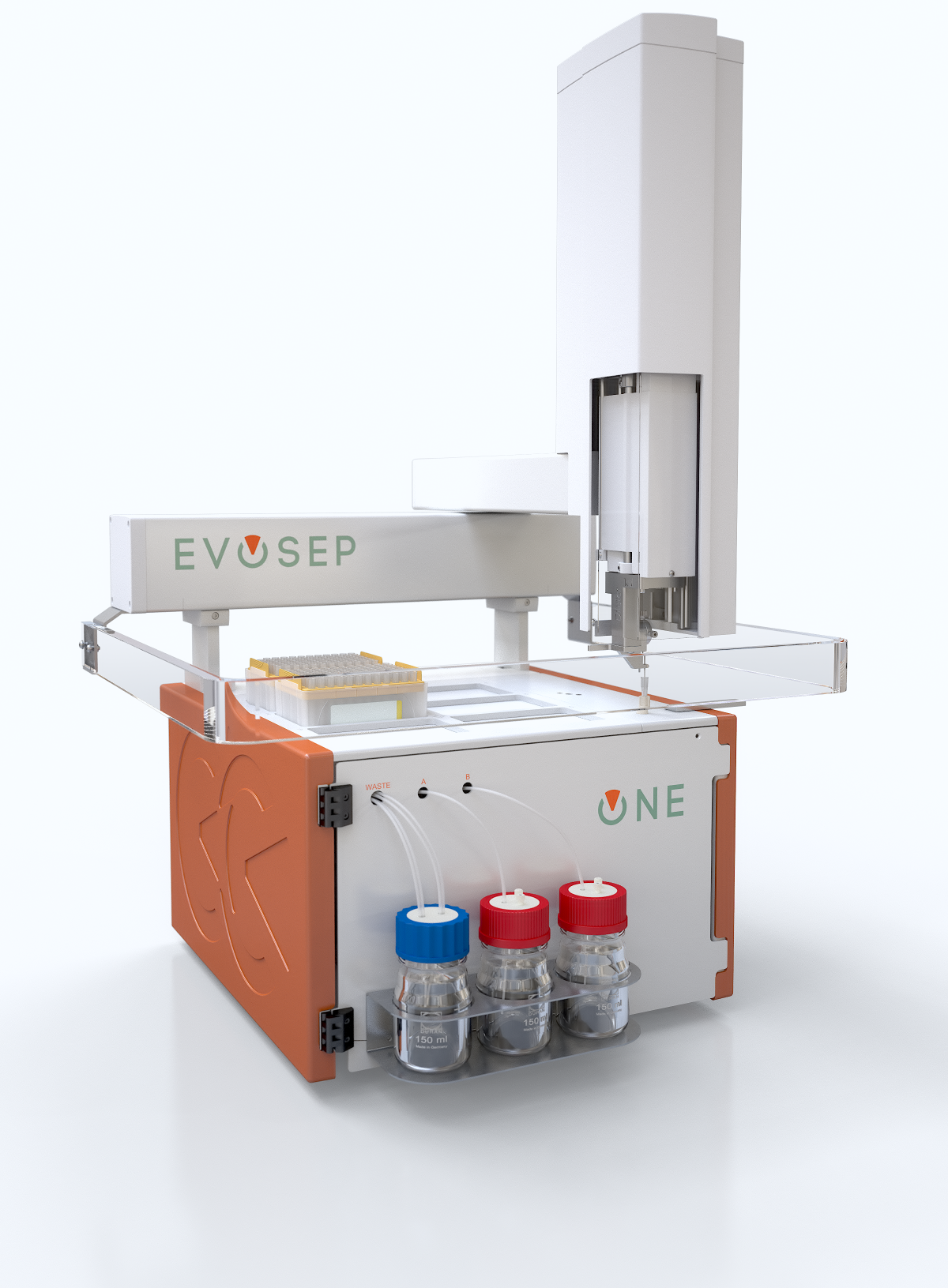 The Evosep One is a plug-and-play liquid chromatography platform built for standardization. It delivers a high level of speed and robustness, while still maintaining the sensitivity needed when performing clinical proteomics. Image Credit: Evosep

Robust and high-throughput single cell proteomics with the Evosep One

Recent advances in the robustness and sensitivity of sample preparation, liquid chromatography, and mass spectrometry instrumentation and workflows have enabled the efficient analysis of the proteomes of single cells. Whisper™ Flow Technology for the Evosep One has been specifically developed for high sensitivity applications such as single cell analysis. The combination of the Aurora Elite column from IonOpticks, Whisper methods on the Evosep One, and dia-PASEF on the timsTOF-SCP provides a powerful combination for robust and high-throughput single cell analysis at competitive sensitivity.

Overall, the presented workflow enables mapping of single cell proteomes with a coverage of up to 2,000 proteins, pushing the boundaries of the protein level insight achievable across heterogeneous cell populations. Another key contributor to this performance level is the nanoscale sample preparation workflow on the cellenONE platform optimized for single cell analysis.

Faster chromatography with up to 500 samples analyzed per day

Automated sample preparation workflows require faster chromatography. Therefore, we are currently developing a robust method enabling analysis of 500 samples per day with two minutes gradient time. Whereas the new fast method was developed for fast but highly sensitive Evosep-MRM analysis of biofluids, it also provides for high peak capacity per minute and still allows analysis of complex mixtures despite the short gradient length.

This method will be presented at ASMS in Minneapolis and made available later in the year.

Diabetes is a global health problem where proper treatment and early diagnosis is important to minimize serious side effects. In many cases the onset of type 2 diabetes can be delayed or completely avoided through lifestyle changes that are typically only incentivized when becoming pre-diabetic. The analysis of glycated albumin can be used to establish the average short term (2-3 weeks) glyceamic status of individuals based and can be performed on blood from a pinprick either directly or deposited as a dried blood spot. This enables remote sampling and inexpensive population-wide screening for early detection and efficient treatment, which is also applicable to geographies with limited access to healthcare.

At ASMS, Evosep presents a fully automated Evosep-MRM workflow for the quantification of glycated albumin at a throughput of 500 samples per day (per system) and showing significantly improved intra-day and inter-day precision for diabetes monitoring. The developed assay displays higher correlation to classical HbA1C measurements and is two times faster than existing glycated albumin assays

In addition to having developed the most recent generation Evotips for much improved sensitivity and separation power on the Evosep One, we have focused on making proteomics even faster and more robust. This is the key goal of the company and we are now delighted to also implement several clinical applications based on the Evosep platform”

Genetic testing of saliva samples identifies the SARS-CoV-2 virus more quickly than testing of nasal swabs. The research is published...

Biological processes such as wound healing and cancer cell invasion rely on the collective and coordinated motion of living cells....