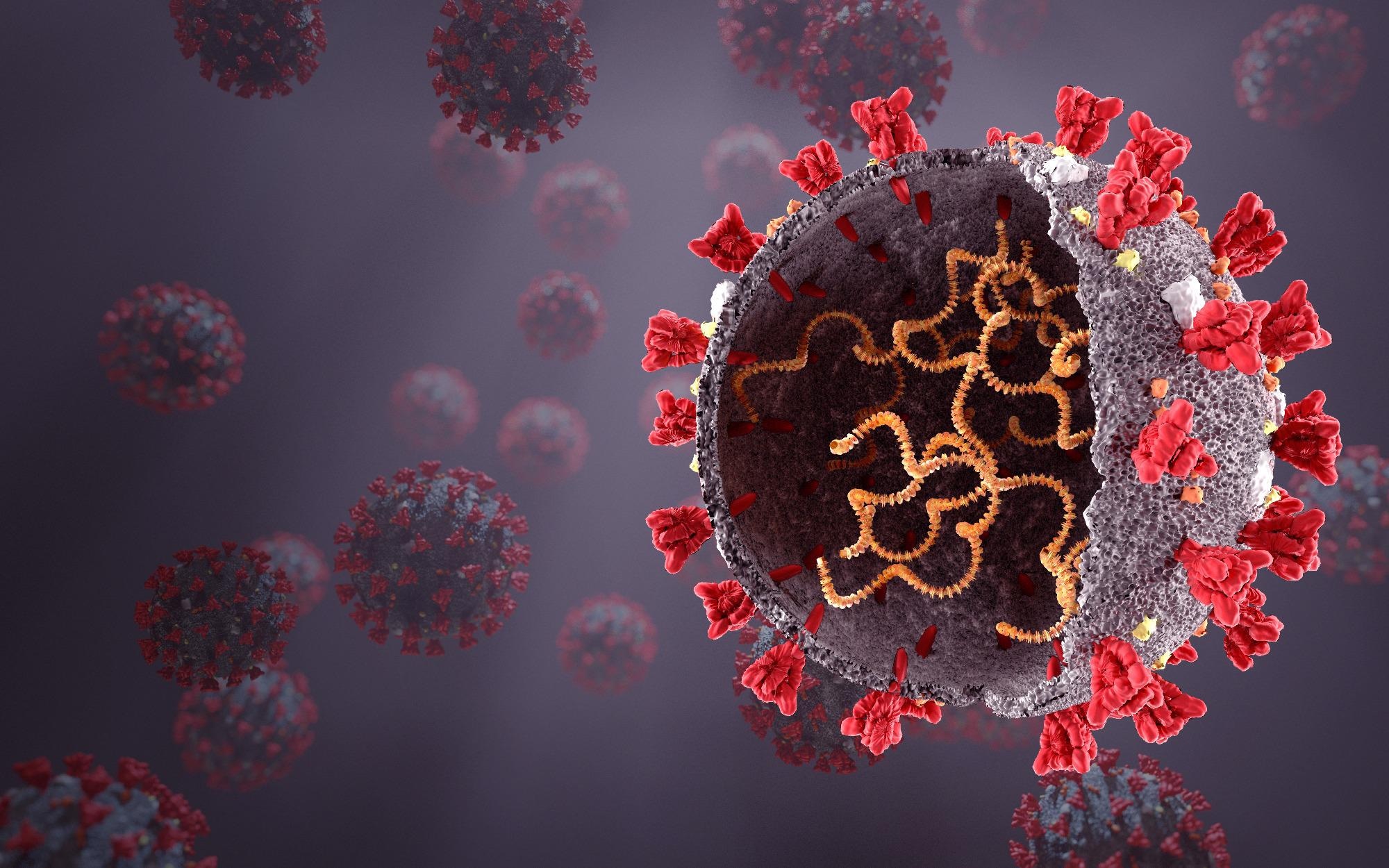 The coronavirus disease 2019 (COVID-19) pandemic caused by SARS-CoV-2 has resulted in more than 491 million cases globally and over 6.15 million deaths.

In two years, the research community has extensively studied and characterized SARS-CoV-2 with thousands of viral genomes sequenced from COVID-19 patients.

These characterizations have been vital to understanding the evolutionary and pathogenic features of SARS-CoV-2 and designing effective therapeutics. However, there is limited knowledge on nucleotide variation and viral genome plasticity, particularly the RNA modifications caused by host cells.

In humans, adenosine to inosine (A-to-I) change catalyzed by adenosine deaminase acting on RNA 1 (ADAR1) is the most common RNA modification, and the translation machinery recognizes the resultant inosine as guanosine (G).

Moreover, the extent to which the SARS-CoV-2 genome is subject to RNA editing inside host cells remains unknown. It is crucial to evaluate whether RNA editing occurs in the SARS-CoV-2 genome because the virus uses the minus (-) strand of its RNA as the template for replication. Any nucleotide change, if induced, could cause genetic variations that subsequent generations could inherit. Besides, the genome of SARS-CoV-2 is vastly protein-coding, unlike human genomes. Therefore, any nucleotide change in the RNA would, with high probability, reflect changes in the amino acid sequences of protein.

The current study identified a nucleotide variant pool from meta-transcriptomic sequence reads with a bioinformatics pipeline and tested if actual RNA editing sites were present in the collection.

Of the 19 samples assessed, one had no detectable SNVs; in the rest of the samples, a consistent pattern of A > G and thymidine (T) > cytidine (C) substitutions. The SNVs, A > G and T > C, correspond to the A-to-I transition in positive (+) and (-) strands, respectively, of SARS-CoV-2 RNA. The authors observed about 144 recurrent SNVs with VAF ranging from 0.5 % to 70 % and obtained a set of A-to-I candidate sequences. Analysis of sequences flanking the candidate sites revealed G depletion and enrichment preference at the editing sites’ -1 and +1 positions, respectively. RNA editing at about 55% of sites resulted in non-synonymous changes, mainly in the ORF1ab and spike protein. 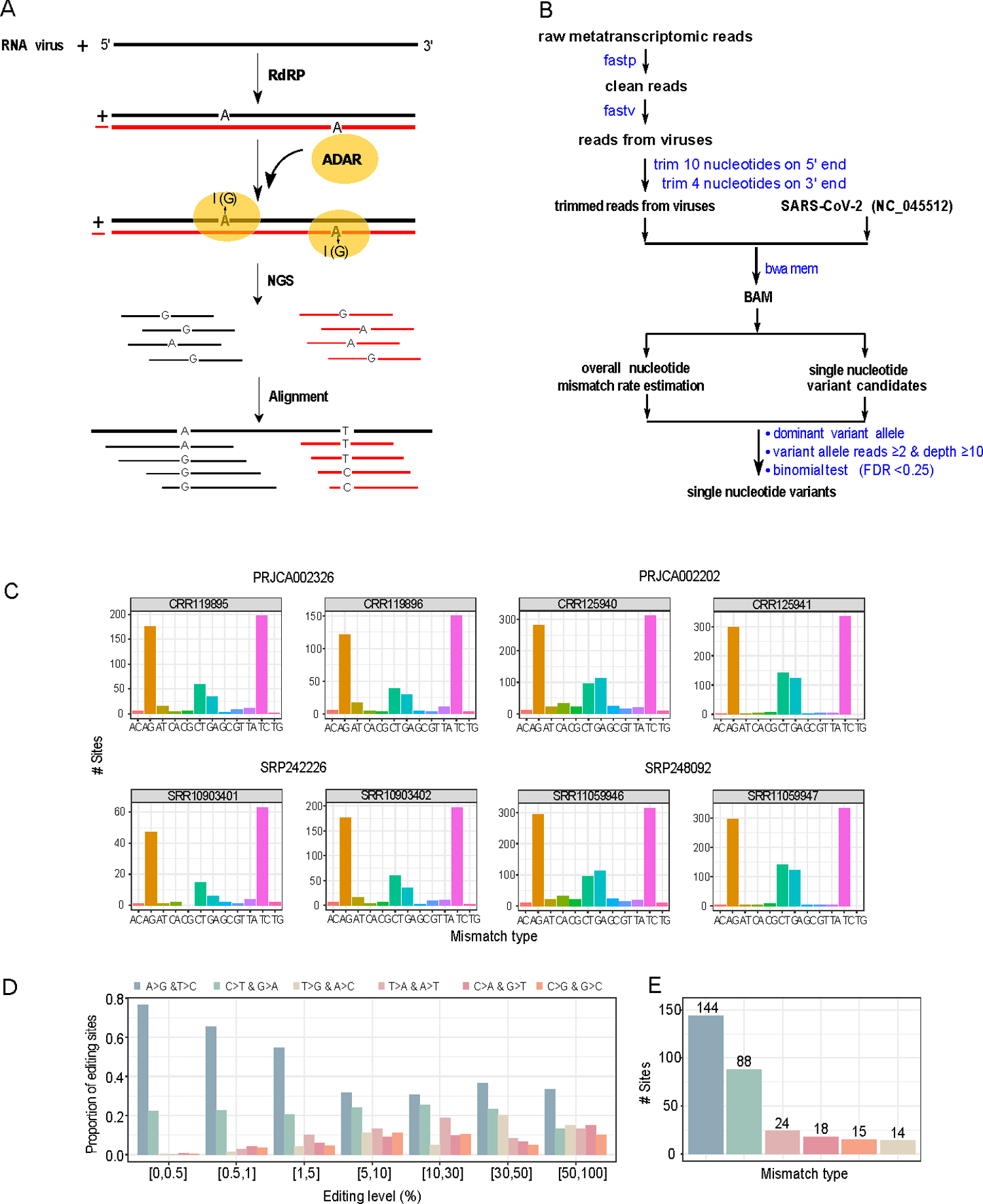 As SARS-CoV-2 RNA replicates in the host cell cytoplasm, harboring the p150 ADAR1 isoform, the research group speculated that the inferred RNA editing sites would have a higher binding affinity to ADAR1. A hybrid neural network was built based on the ADAR1 crosslinking immunoprecipitation (CLIP) followed by high-throughput sequencing (CLIP-seq) peak set to predict binding affinity. It was noted that many RNA editing sites had a greater tendency to bind to ADAR1.

RNA sequencing (RNA-seq) data were obtained from a cell line infected with SARS-CoV-2. Ruxolitinib, an immunosuppressive agent, significantly reduced the expression levels of ADAR1 in the infected cells. The inhibition was more apparent for its p110 isoform, and RNA editing was lower at the candidate sites.

Of the 84 candidate editing sites, 75% exhibited reduced editing levels, indicating the direct effect of ADAR1 of host cells on the A-to-I viral RNA editing. RNA editing sites were enriched in clusters, i.e., the distance between RNA editing sites was shorter. CROSS, a computational RNA structure prediction algorithm, revealed that RNA editing sites had a significantly high propensity to form secondary structures. The amino acid substitutions induced by the RNA editing events were studied in the context of binding affinity of T cell epitope to human leucocyte antigen (HLA) and improved binding affinity with the edited peptide relative to wild-type peptide was noted.

The present study reported that ADAR1 mediates A-to-I RNA editing of SARS-CoV-2 RNA in host cells. Thus, RNA editing might represent another factor of genetic variation of the SARS-CoV-2 genome shaping its evolution and plasticity. In addition to the p150 ADAR1 isoform, the p110 isoform was also observed as mediating viral RNA editing.

While the vast majority of U.S. adults who are fully vaccinated and boosted against Covid-19 would be likely to recommend...

A new study, published in Nature Communications and led by Imperial College London researchers, provides the first evidence of a...

In a recent study posted to the bioRxiv* preprint server, researchers analyzed the effect of vaccine booster doses against the...

The UK bilaterally donated 1 million doses of the Oxford-AstraZeneca vaccine to Bangladesh. The vaccine consignment arrived in Bangladesh on...

In a recent study posted to the medRxiv* preprint server, researchers evaluated the immune responses after the third (V3) and...