A new bioRxiv* preprint study led by Michelle Monje of Stanford University in California finds that a mild COVID-19 infection can produce long-term neurological damage. Persistent cognitive complications are one of many symptoms of long COVID, and the latest results suggest the severity of COVID-19 induced brain fog is similar to cancer’s “chemobrain.”

Among the neurological damage is loss of myelin and increases in neuroinflammation that harm different types of brain cells. A lack of myelin in neurons threatens the health of current brain cells and impairs neural communication.

“The findings presented here illustrate striking similarities between neuropathophysiology after cancer therapy and after SARS-CoV-2 infection, and elucidate cellular deficits that may contribute to lasting neurological symptoms following even mild SARS-CoV-2 infection,” conclude the research team. 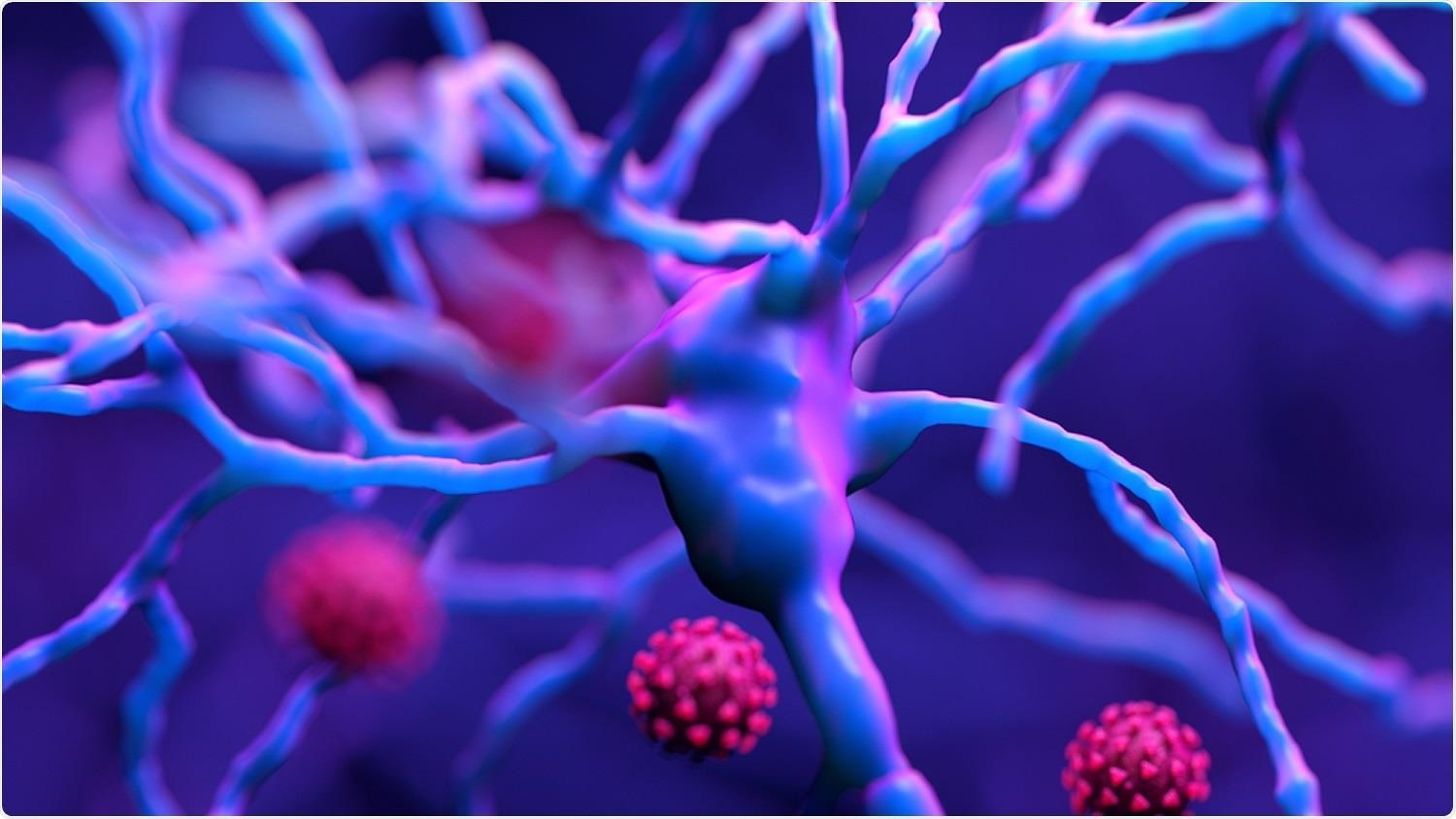 The research team used a mouse model to simulate mild COVID-19 infection in the lungs only. Because severe acute respiratory syndrome coronavirus 2 (SARS‑CoV‑2) infection requires human ACE2 expression, the researchers inserted human ACE2 through a viral vector in the trachea and lungs. Two weeks after delivering human ACE2, a sample of SARS-CoV-2 was administered to mice through an intranasal route. The control group was given a viral vector without human ACE2 and also had a mock infection intranasally. 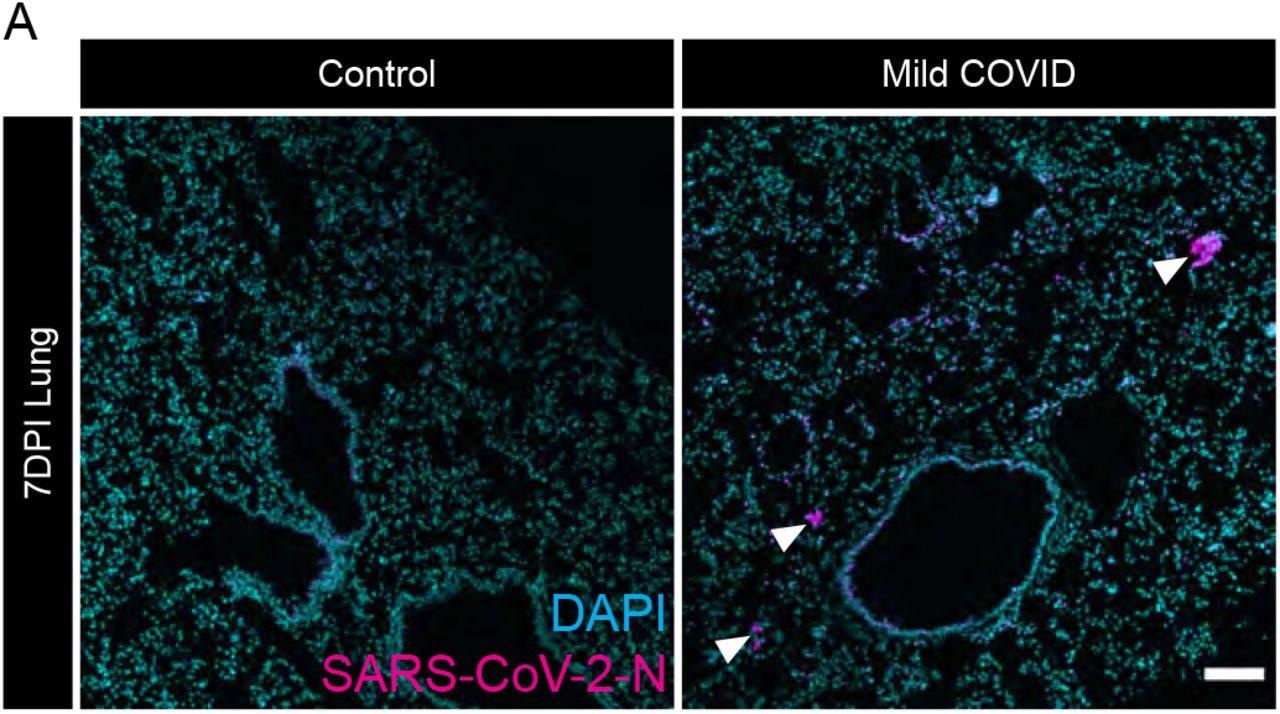 The infected mice showed no noticeable signs of weight loss or sickness. The researchers confirmed that SARS-CoV-2 was only in the lungs, not the brain. 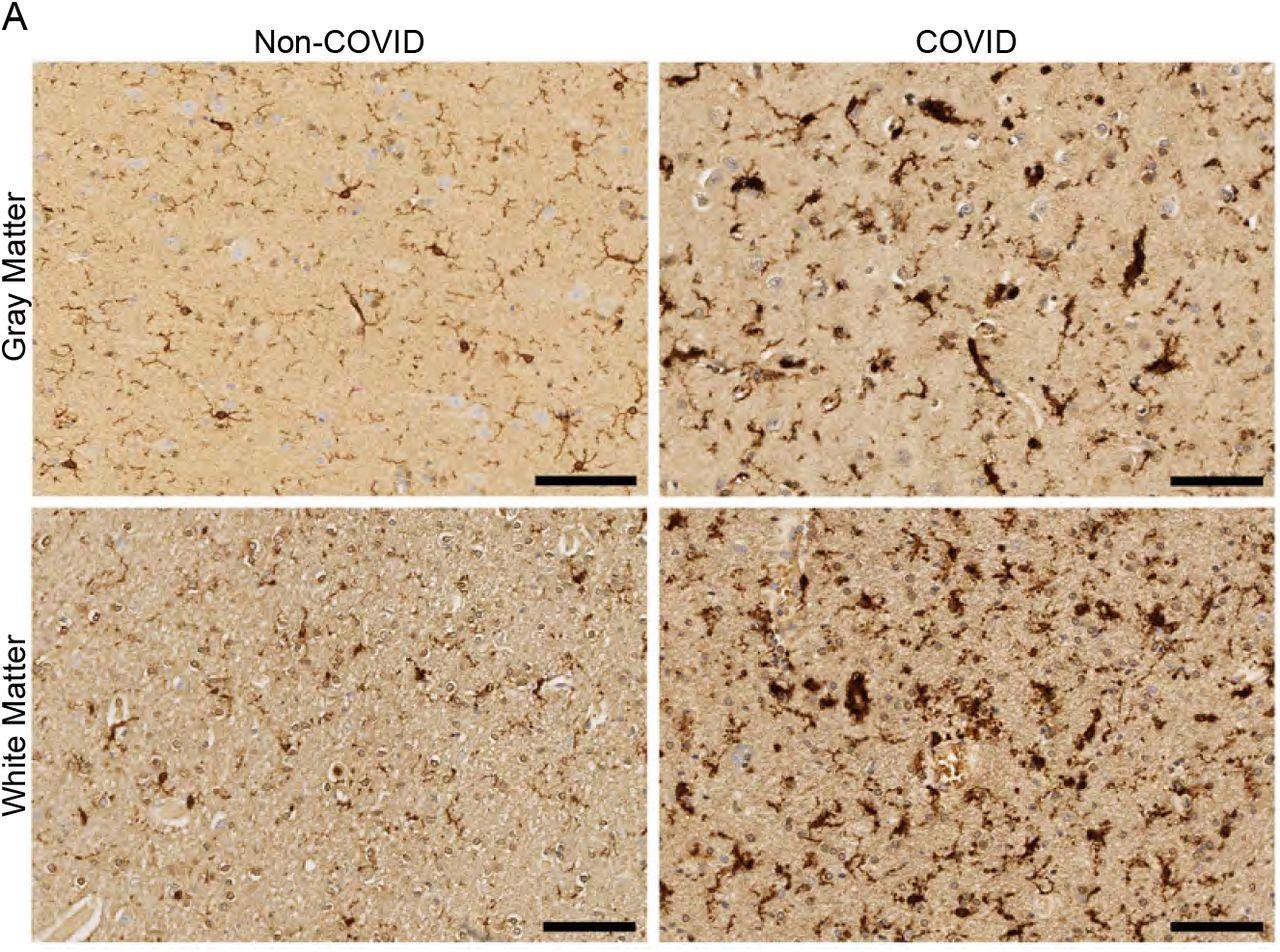 White matter-selective microglial reactivity in humans with SARS-CoV-2 infection (A) Representative micrographs of IBA1 immunostaining (brown) in the cerebral cortex (gray matter) or subcortical white matter of human subjects with or without COVID. Scale bars 100μm.

While mice with confirmed respiratory infection did not exhibit symptoms, the researchers discovered high cytokine levels in their cerebrospinal fluid (CSF) a week after infection. The team also found increased amounts of CSF cytokines and chemokines such as CXCL10, IL6, IFN-g, CCL7, CCL2, CCL11, and BAFF.

The findings suggest SARS-CoV-2 infection can cause changes to cytokines within the CSF even if there is no direct viral invasion in the brain.

Increased microglial activity in subcortical areas of the brain after infection

A week after infection, mice with mild COVID-19 infection showed increased microglial activity in the subcortical white matter. The changes persisted for 7 weeks. There were no changes to cortical gray matter.

When looking at the hippocampus of infected mice, results showed increased microglial reactivity in hippocampal white matter 7 days after infection, which persisted for 7 weeks.

Elevated levels of reactive microglia interfered with creating new neurons for the hippocampus, a critical site for learning and memory. As a result, there was a significant reduction in new neurons in the hippocampus a week after infection. Low neurogenesis was still evident after a 7-week follow-up.

The elevated levels of cytokines within CSF after mild infection is a sign of elevated IL6 levels in CSF a week after infection and increases in cytokine CCL11 after 7 weeks.

Next, the researchers looked at how mild infection affected oligodendrocytes in subcortical white matter. Oligodendrocytes are responsible for creating a protective coating called the myelin sheath to all neurons in the central nervous system. The myelin sheath is also essential in allowing rapid communication between neurons.

Given the lack of oligodendrocytes, there was also a substantial decrease in myelin. Reduced myelinated axons in subcortical white was observed a week after infection and persisted for 7 weeks.

After the success of mRNA vaccines against COVID-19, scientists are cautiously optimistic that the same technology can be used to...

In a recent study posted to the medRxiv* preprint server, researchers examined the coronavirus disease 2019 (COVID-19) vaccine uptake and...

A promising approach for COVID-19 prophylaxis