In a recent study published on the bioRxiv* preprint server, researchers demonstrate the role of integrins in the establishment of the severe acute respiratory syndrome coronavirus 2 (SARS-CoV-2) infection. 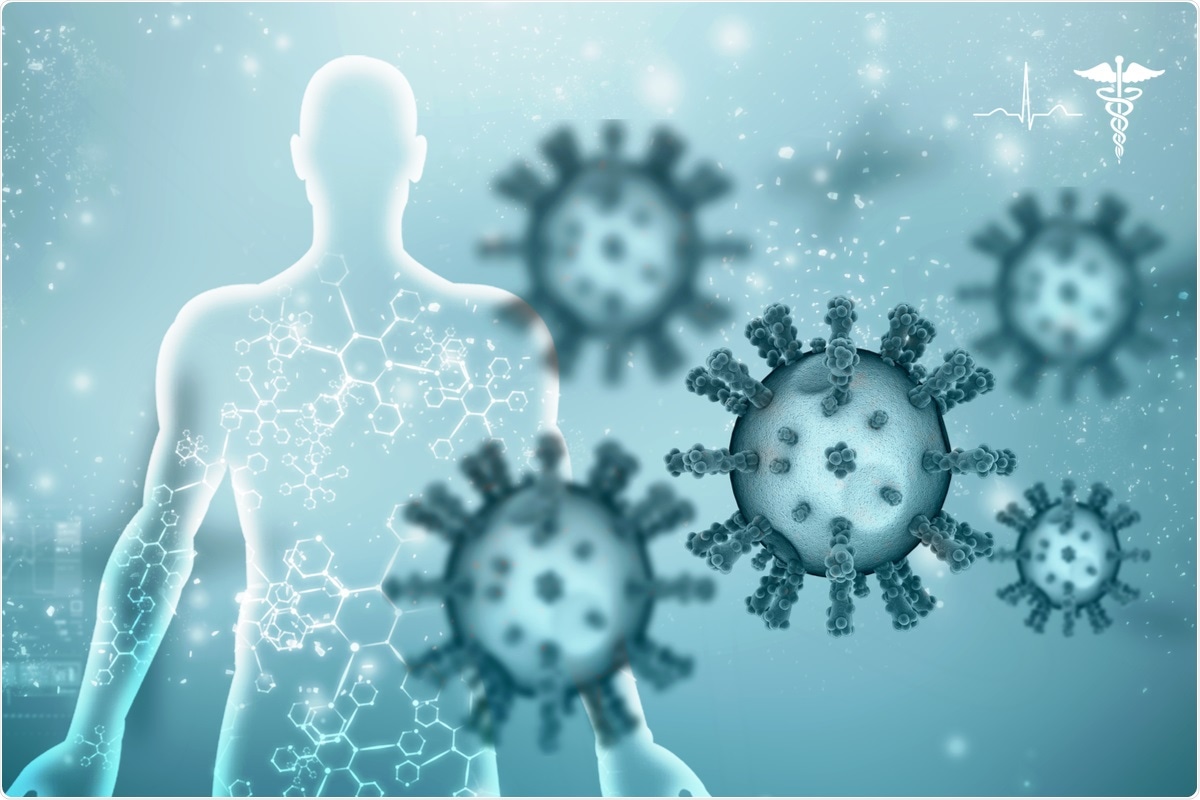 This study was published in response to a recent Nature paper by Zech et al., which found that the mutation at position 403 (R403) of the SARS-CoV-2 spike (S) protein was critical for S protein binding to the human angiotensin-converting enzyme 2 (hACE2) receptor during SARS-CoV-2 infection. Zech et al. arrived at this conclusion through computational analyses, wherein they studied the electrostatic interactions between the SARS-CoV-2 S protein trimer and ACE2 receptor. The researchers of the present study propose that the findings of Zech et al. showing the R403 site near the E37 residue of ACE2 were assumptive.

Next, they performed molecular docking and molecular dynamics (MD) simulations of human integrin α5b1 and the receptor-binding domain (RBD) of the SARS-CoV-2 S protein. An in vitro para-nitrophenyl phosphate-binding assay assessed Cilengitide inhibition of SARS-CoV-2 binding.

The study analysis showed that the bond lengths between the R403 site and integrin surface residues were in close proximity and made strong electrostatic bonds that were energetically favorable for in vivo interactions. Further, there was evidence that the tripeptide Arg-Gly-Asp (RGD) motifs at the S protein position R403 had exceedingly high affinity for integrins in vivo. These results suggest that, when exposed to both ACE2 and integrins on a target cell, the solvent-exposed R403 would bind to integrins preferentially, rather than weakly interacting with ACE2.

The researchers emphasized the use of cell types that could properly model the influence of integrin-binding in conjunction with ACE2 when examining the role of R403 in SARS-CoV-2 adherence. Zech et al. used human epithelial colorectal Caco-2, human embryonic kidney HEK293T, alveolar basal epithelial A549, and submucosal gland Calu-3 cells for their in vitro infection assay. These cell types did not express integrins and thus did not model the influence of integrin binding to R403.

Moreover, Zech et al. did not use endothelial cells, which would have more accurately modeled the vascular injuries occurring in coronavirus disease 2019 (COVID-19). Since Zech et al. used Caco-2 cells moderately expressing integrin subunit αV, they showed a six-fold increase in SARS-CoV-2 replication but could not establish the role of ACE2 in facilitating the same.

In the present study, molecular modeling revealed several contact points between S protein R403 and αV at energetically favorable distances for in vivo interaction. Additionally, in silico studies have identified the integrin subunit β1 as an alleged receptor for SARS-CoV-2 S protein in A549 cells showing a 2.5-fold increase in SARS-CoV-2 replication. 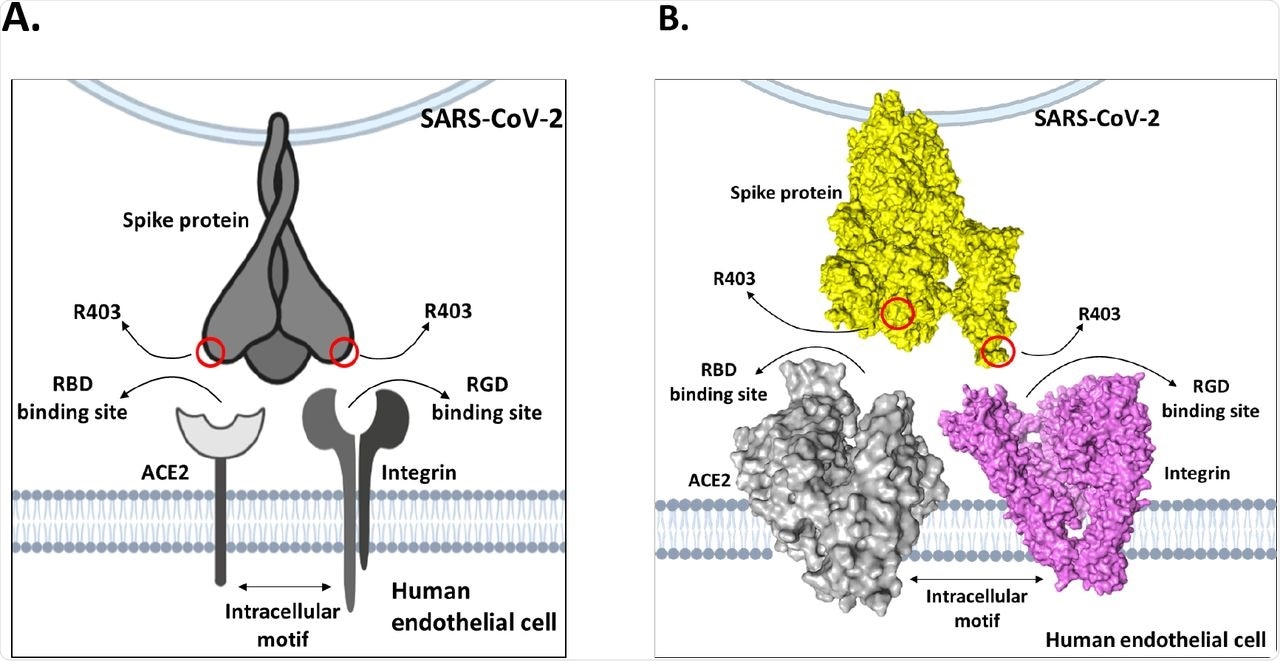 This is the first study to produce evidence that integrin inhibitors ATN-161 and Cilengitide inhibit SARS-CoV-2 binding and epithelial infectivity in vitro, where integrins control cellular permeability and inflammation. Further, the present study demonstrates that the inhibition of integrin α5β1 and αvβ3 could reduce SARS-CoV-2 viral load and pathological complications in vivo.

Although ATN-161 binds integrin αVβ3, this inhibitor primarily targets α5β1 and was therefore ineffective when used in SARS-CoV-2 infected Caco-2 cells not expressing the α5β1 heterodimer. MD simulations of ATN-161 binding with α5β1 showed its binding to the inner cavity of α5, thereby reducing the availability of R403 to bind to this integrin.

Cilengitide targeting integrin αV reduced SARS-CoV-2 attachment and epithelial infectivity in Caco-2 cells in vitro, as these cells did not express integrin subunit αV. Overall, these results suggest that ATN-161 is more appropriate for use on cells that express α5β1 integrins, whereas Cilengitide is better suited to investigate the role of integrins in SARS-CoV-2 infectivity in Caco-2 cells.

The researchers of the current study propose that the R403 mutation has evolved to takeover endothelial integrins to drive intracellular signaling cascades that mediate COVID-19-induced severe endothelial injury, and to some extent, bind ACE2 in the epithelium. The study findings, therefore, emphasize the need for continual research efforts to investigate the role of R403 mutation in SARS-CoV-2 dissemination.

As there is both in vivo and in vitro evidence supporting the use of integrins as novel receptors of SARS-CoV-2, the study findings support continued in vivo studies examining ATN-161 and Cilengitide as novel therapeutic interventions for reducing SARS-CoV-2 adherence and infection.

The present study results aligned with the Zech et al. findings and support the claim that the R403 mutation facilitates SARS-CoV-2 S protein attachment to ACE2 in epithelial cells. However, the researchers suggested that the only possible explanation for the evolutionary benefit of the R403 mutation is that there is a dual-receptor mechanism that exists between integrins and ACE2, which widens SARS-CoV-2 tissue tropism that subsequently encourages its efficient transmission.

Malvern Panalytical, a company providing advanced analysis and services solutions for the pharma drug product development, as well as services...

A new ultra-rapid genome sequencing approach developed by Stanford Medicine scientists and their collaborators was used to diagnose rare genetic...

The Native Antigen Company (part of LGC Clinical Diagnostics), one of the world’s leading suppliers of reagents that enables research into...

Cannabinoids may prevent infection with SARS-CoV-2, including variants

A new study published in the Journal of Natural Products of the American Chemical Society and American Society of Pharmacognosy...

A consistent metabolic ratio found across 133 Chinese marine and freshwater fish species provides new evidence in support of the...