The first published case describing the Delta variant of the severe acute respiratory syndrome coronavirus 2 (SARS-CoV-2) in a domestic cat in the United States highlights the realistic scenario of spillover infections with emerging viral variants that threaten human and animal health. The research paper is currently available on the bioRxiv preprint* server while it undergoes peer review. 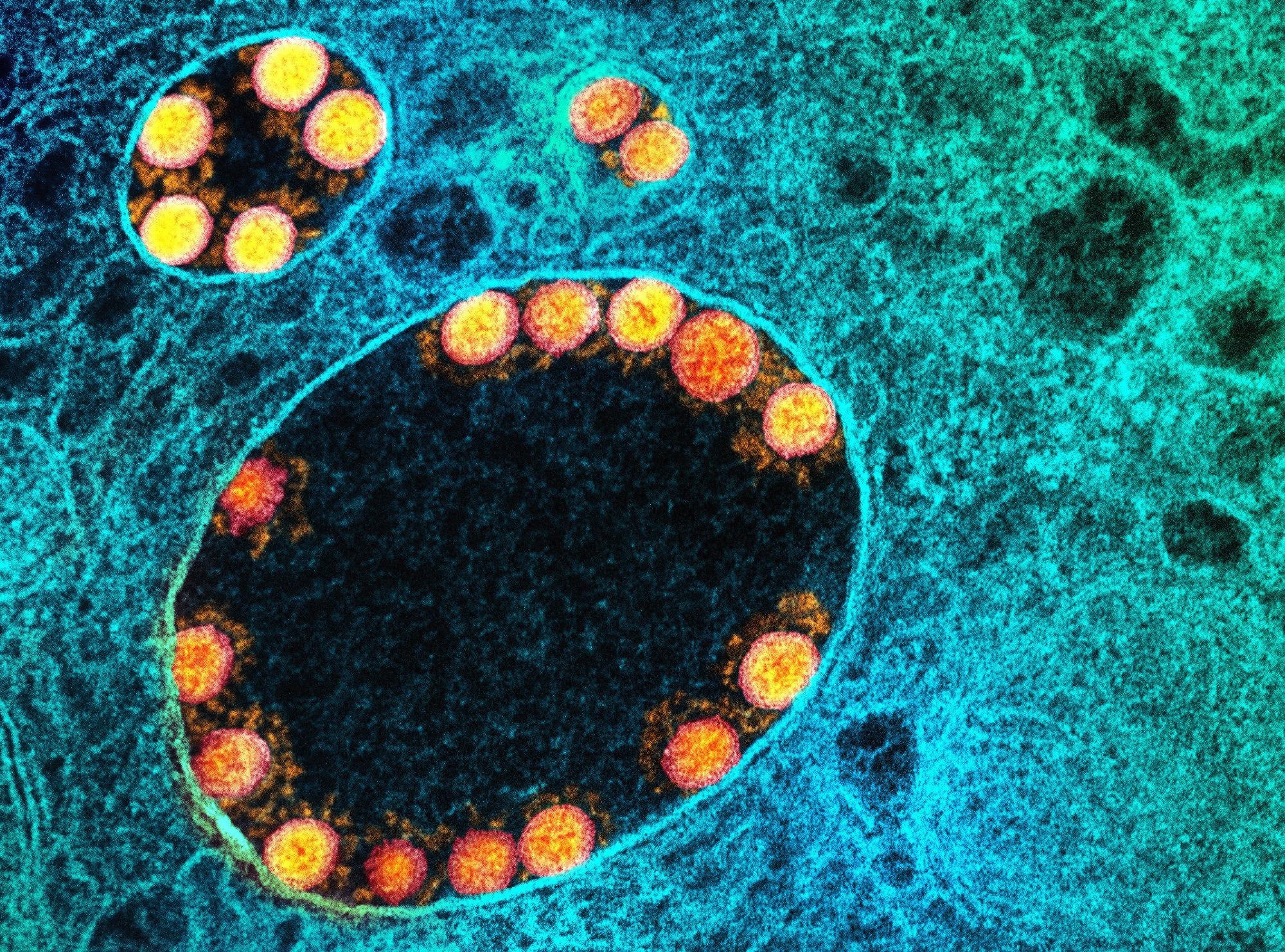 Infections with SARS-CoV-2, a causative agent of the ongoing coronavirus disease 2019 (COVID-19) pandemic, have spilled over from humans to a myriad of animal species. This includes domestic cats and dogs, but also non-domestic large felids, white-tailed deer, and minks, amongst others.

One of the more threatening variants is the Delta variant, which has been thus far confirmed in one dog in the United States (related to specific AY.3 lineage) and several Asiatic lions in India and three domestic cats in China.

As this variant spreads more easily among humans, is linked to more severe disease, and is associated with much higher rates of vaccine breakthrough infections in comparison to lineages that have emerged earlier in the pandemic, tracking the natural host range is needed to clarify potential zoonotic reservoirs.

In this paper, a research group from the University of Pennsylvania (led by Dr. Olivia C. Renz and Dr. Andrew D. Marques) reported a SARS-CoV-2 Delta variant (AY.3) in fecal specimens from a domestic house cat in the Delaware Valley region of southeastern Pennsylvania.

In the study, the authors explain how the 11-year old female cat presented to the Ryan Veterinary Hospital Emergency Service (which is part of the University of Pennsylvania School of Veterinary Medicine) after several days of lethargy, loss of appetite, soft stools and vomiting, as well as with known exposure to SARS-CoV-2 (as one of the cat’s owners tested positive before symptom onset).

A fecal sample was sent for polymerase chain reaction (PCR) testing for infectious agents linked to feline gastrointestinal disease (such as specific bacterial, viral, and parasitic agents), but all the results came back negative.

Then the fecal sample was tested for SARS-CoV-2 by utilizing the Centers for Disease Control 2019 Novel Coronavirus real-time PCR (RT-PCR) Diagnostic Panel. The test result came positive, so SARS-CoV-2 whole genome sequencing and phylogenetic analysis have been pursued immediately to obtain the genetic profile of the virus.

In short, two feline fecal samples that have been collected seven days apart both had cycle threshold values for the detection of SARS-CoV-2 between 26-28, which indicates that there are relatively high levels of genomic replication and high levels of viral ribonucleic acid (RNA).

Moreover, detailed sequencing of the feline-derived viral genomes revealed the two to be indistinguishable and varying by between 4 and 14 single nucleotide polymorphisms in pairwise comparisons to human-derived lineage AY.3 sequences were collected in the same geographic region and within the same time period.

But although fecal samples from the infected cat contained relatively high levels of viral genetic material, SARS-CoV-2 was not found on the oropharyngeal swab taken on the day of presentation to the veterinary hospital. 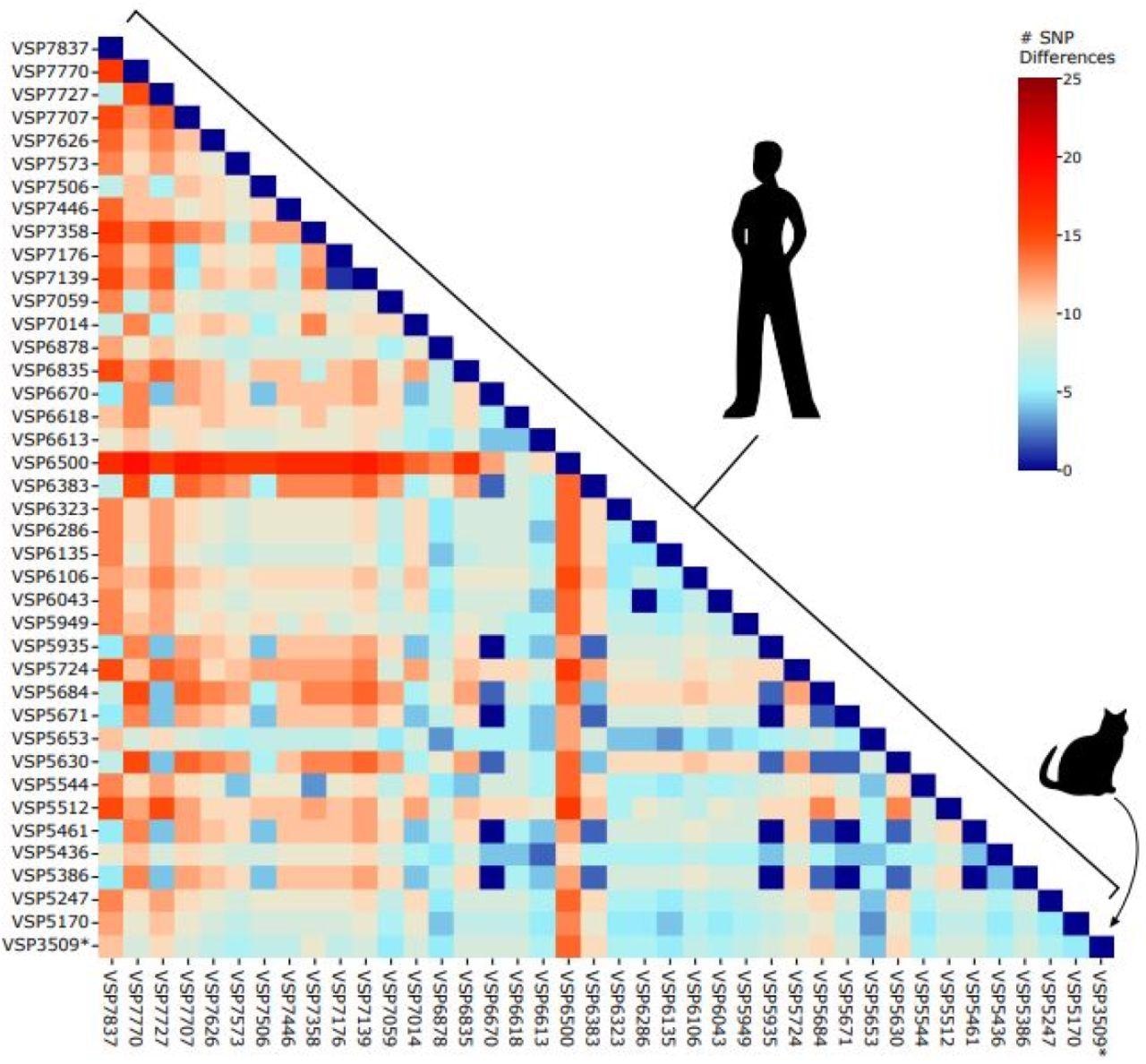 Pairwise distances between AY.3 sequences in the Delaware Valley. Included are the feline-derived sequence (VSP3509) and human-derived sequences. The number of SNPs separating each pair of lineages is shown by the color code (key to the right of the figure).

The significance of interspecies transmission

“Since domestic felines can support relatively efficient replication of SARS-CoV-2 viral genomes similar to those that infect humans, can transmit SARS-CoV-2 viruses to naïve conspecifics, and frequently have a high degree of contact with humans, they have the potential to become an enzootic reservoir for the virus”, say study authors in this bioRxiv paper.

Therefore, the transmission and reservoir formation of SARS-CoV-2 non-human animal species represents a threat to domestic animals, wildlife, and human health. Consequently, there is a need to carefully track SARS-CoV-2 variants of concern in domestic house cats to elucidate the interconnected nature of animal and human health in this pandemic.

In a recent study published on the medRxiv* preprint server, researchers performed genomic surveillance of the severe acute respiratory syndrome...

When teens blow off parents’ pleas to get vaccinated, the consequences can be deadly

Kennedy Stonum, a high school junior, deflected repeated entreaties from her father to please just get vaccinated against covid-19. "I...

Coronaviruses can be detected in wastewater some days before first disease symptoms develop. On this basis, it is possible to...

Charts paint a grim picture 2 years into the coronavirus pandemic

The coronavirus pandemic is now stretching into its third year, a grim milestone that calls for another look at the...

Coronavirus disease 2019 (COVID-19) first emerged in Wuhan, China, and has since spread to nearly every country in the world....

In a recent study posted to the medRxiv* preprint server, researchers determined the immune mechanisms associated with severe neurological manifestations of...