A thorough evaluation of the transcriptome is provided by high-resolution RNA analysis using next-generation sequencing (RNA-seq), enabling the measurement of global gene expression. The use of RNA-seq in the study of diseases has increased, especially in cancer research where molecular profiling of tumors has become more useful.

RNA was extracted from donor-matched normal and tumor breast tissue and is used as an input into each RNA-seq library construction kit to examine the effects of workflow variations. Key metrics for library construction and sequencing were used to compare the resulting libraries. Differential gene expression analysis was carried out, and the outcomes were independently confirmed using qRT-PCR.

From AMSBIO, researchers obtained a patient-matched, fresh-frozen primary breast tumor and surrounding normal breast tissue. The tumor is a Grade 2, Stage IIb infiltrating lobular carcinoma, according to the technical documentation. A large tumor without detectable lymph node involvement or distant metastasis was indicated by the TNM staging (T3, N0, M0).

Using the Qubit® RNA HS Assay (ThermoFisher), total RNA was quantified after extraction and DNase treatment. A 2100 Bioanalyzer instrument and an Agilent® 6000 RNA Pico Kit (Agilent Technologies) were used to evaluate the quality of the RNA (Figure 1).

The RNA Integrity Number (RIN) and the DV200 value are two metrics that are regularly used to assess the quality of RNA. Both metrics are based on the size distribution of the RNA, which is assessed using an electrophoretic trace. The ratio of intact ribosomal peaks to the presence of intermediate peaks is used to calculate the RIN score, which is instantaneously tabulated by the Agilent Expert software.

The RIN score’s usefulness is however diminished by the fact that RNA extracted from archived biospecimens, like those used in this study, frequently lacks distinct ribosomal peaks. In contrast, the DV200 value, which is calculated as the percentage of RNA molecules longer than 200 nucleotides (nt), is independent of the presence of ribosomal peaks.

The DV200 is a better method for evaluating the quality of degraded RNA samples since RNA fragments smaller than 200 nt are poor substrates for RNA-seq library construction and are unlikely to contribute to the final library.

Ribosomal RNA (rRNA), which is typically present in high concentrations in RNA extractions (up to 90%), is not of biological interest to the majority of researchers. Prior to building an RNA-seq library, rRNA is removed, which enhances coverage of lower-abundance transcripts and makes sequencing more economical. Therefore, rRNA depletion is the first step in each of the three workflows used in this study.

The total RNA sample is incubated with probes that are complementary to rRNA sequences under circumstances that promote hybridization.

RNase H is then added to degrade the hybridized rRNA enzymatically, or paramagnetic beads are added to eliminate the probe/rRNA complexes from the sample when a magnetic field is applied, whichever method results in the least amount of rRNA. Each workflow’s rRNA depletion method is listed in Table 1.

Using HiSeq® 2500 technology and v4 chemistry (Illumina), distinctively indexed duplicate libraries out of each sample and workflow were normalized and pooled for 2 × 100 bp paired-end sequencing.

Cutadapt and trimmomatic were used, respectively, for adapter and quality trimming. Reads were filtered to remove rRNA reads and sub-sampled to the least common number of paired reads (14 M) before being aligned to a hard-masked version of the human reference GRCh38.

A specially created RealTime ready qPCR array (Roche) was used to validate the results of the differential gene expression analysis. Three reference genes for normalization, five positive and negative reverse transcription controls, and 88 assays for transcripts recognized as differentially expressed by RNA-seq are all included in the custom design.

The Transcriptor First Strand cDNA Synthesis Kit (Roche) was used to create cDNA for each sample, starting with 600 ng of total RNA and using both random hexamers and anchored oligo-dT primers.

After being heat-inactivated, 200 ng of cDNA was integrated with qPCR tools (LightCycler® 480 Probes Master), aliquoted into a real-time assay plate, and amplified using the LightCycler 480 System in accordance with the manufacturer’s instructions.

Data was grouped before analysis, and duplicate plates were assayed for each sample. The delta delta Cp method was used to calculate the relative differential gene expression.

The output from all three workflows was sufficient for library QC, sequencing, and archiving. Even though the number of amplification cycles for Kapa and NEB libraries (13 and 15 cycles, respectively) was different, similar yields were still obtained. If the two workflows’ amplification efficiencies are comparable, this should result in higher diversity for Kapa libraries and lower duplication rates.

Even though Kapa and NEB libraries were more consistent between sample types than Illumina libraries, all three workflows generated final libraries with minimal adapter-dimer formation (<3%) and libraries of comparable sizes (Table 1).

While the Illumina bead-based strategy produced up to 22% rRNA reads, the Kapa and NEB workflows, which both use enzymatic strategies for rRNA depletion, demonstrated effective depletion of rRNA (≤2% rRNA reads) (Figure 2B).

In comparison to alternative workflows, Kapa libraries showed improved coverage uniformity, as evidenced by a lower mean coefficient of variation (CV), particularly for the tumor sample (Figure 2C). Both the Illumina and Kapa workflows outperformed NEB in terms of the percentage of duplicate reads (Figure 2D). 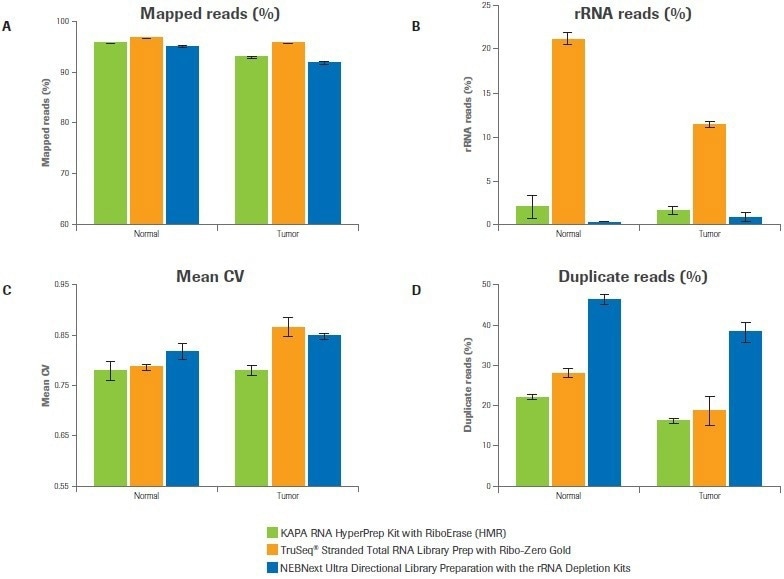 Compared to the Illumina or NEB workflows, the Kapa workflow found more distinct transcripts in both tumor and normal samples (Figure 3A). It was anticipated that this would have consequences for the study of differential gene expression.

When the minimum foldchange was set to ≥2 at a p-value <0.05, data analysis from Kapa libraries found up to 50% more differentially expressed transcripts than from libraries made with the alternative kits (Figure 3B). The difference was even more pronounced when the statistical threshold was raised (p-value ≤0.001); Kapa discovered five times as many differentially expressed transcripts as alternative workflows (Figure 3B–C). 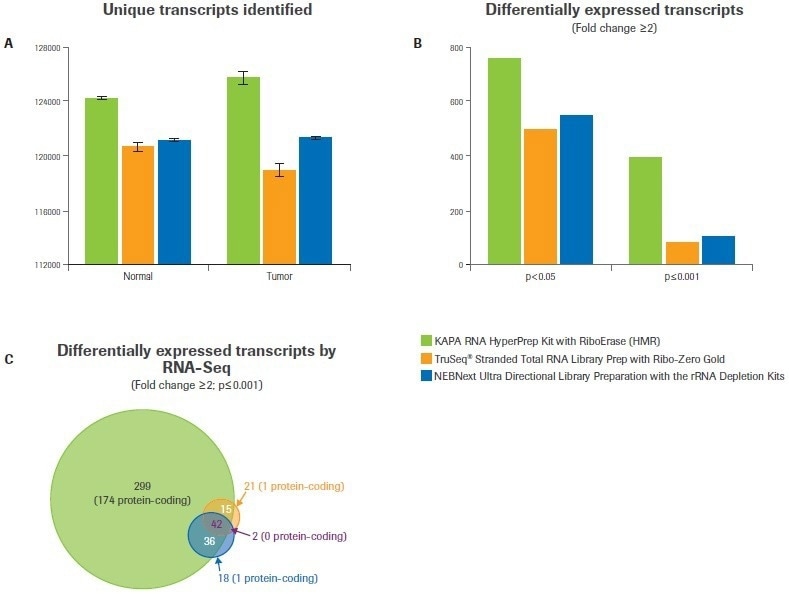 Figure 3. Comparison of workflows for identifying differential gene expression. After subsampling, data was analyzed to quantify (A) the number of unique transcripts identified for each workflow. Bars represent the mean from duplicate libraries and error bars indicate 0.5 of the range. (B) Differential gene expression analysis was performed with varying statistical stringencies to test the robustness of each workflow. (C) Overlap analysis was performed to test the degree of agreement between workflows. The number of transcripts in each category is indicated, with the number of protein-coding transcripts listed in parentheses. Image Credit: Roche Diagnostics Limited

However, only 174 out of 299 of the transcripts discovered using the Kapa workflow (or 58%) are protein-coding, and most of these are identified to be dysregulated in breast cancer.2,3

Figure 4. RealTime ready custom panel design. This panel was designed to test 88 up- and down-regulated transcripts across a range of fold changes (≥2) and p-values (0.001 to 9.02E-39) identified by RNA-seq. The coloring reflects the p-value for each target measured by RNA-seq. The 10 targets highlighted in white are differentially expressed transcripts that were identified by multiple workflows. The remaining 78 targets were identified by Kapa only. Housekeeping genes and controls for the reverse transcription reaction are in grey. Image Credit: Roche Diagnostics Limited

Of the 88 assays, 81 (92%) produced Cp data with high confidence for duplicates of the tumor and normal samples. These 81 transcripts—71 of which were “Kapa-only” targets—were further examined for expression differences.

Of the 71 targets discovered exclusively using the Kapa workflow, 62 transcripts (87%) showed a ≥2-fold change in the anticipated direction. Seven more targets showed a similar trend to the RNA-seq data but did not change by at least a 2-fold threshold for qPCR. Only two (3%) targets did not change numerically between normal and tumor samples.

The overall conclusion is that these qPCR results provide independent confirmation that the differentially expressed transcripts discovered solely by the Kapa workflow represent quantifiable changes in gene expression and not RNA-seq artifacts.

It is important to note that the PAM50 classifier, a clinical tool used to categorize breast cancers into one of four intrinsic subtypes and frequently used as a prognostic indicator, contains four of the transcripts that were found to be differentially expressed solely by the Kapa workflow.

FOXA1, MLPH, MYC, and SLC39A6 were the PAM50 transcripts that showed differential expression.2

A simplified, reliable workflow for building RNA-seq libraries from partially degraded RNA samples is provided by the KAPA RNA HyperPrep Kit with RiboErase (HMR). In comparison to alternative workflows, the library construction was successful and reproducible, with higher complexity, more effective rRNA depletion, and more balanced base coverage.

Additionally, the Kapa workflow found more transcripts with differential expressions. These results were validated by qPCR, demonstrating the effectiveness of the KAPA RNA HyperPrep Kit with RiboErase (HMR) as a molecular profiling tool.

About Roche Sequencing and Life Science 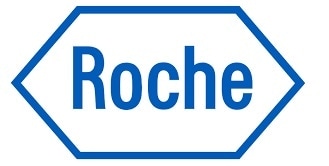 Along with Roche Pharmaceuticals, Roche Sequencing and Life Science is an important part of the foundation that modern healthcare builds upon. Our broad range of innovative diagnostic tests and systems play a pivotal role in the groundbreaking area of integrated healthcare solutions and cover the early detection, targeted screening, evaluation and monitoring of disease. Roche Sequencing and Life Science is active in all market segments, from scientific research and clinical laboratory systems to patient self-monitoring.

CAS and ACROBiosystems recently published new research in the Nature journal focussed on the COVID-19 Omicron variant. The paper is...

Magnetic resonance imaging (MRI) is a valuable tool for producing detailed images of the anatomy of the body and monitor...

Novel psychoactive substances (NPS) include synthetic cannabinoids, novel stimulants, and synthetic opioids, among others. Often, these drugs are sold online...

Deducing the structure of a new psychoactive substance

‘The new compound contains a cyclobutyl methyl group as a side chain and has not been described in any patent...

Levels of infectious SARS-CoV-2 in vaccinated and unvaccinated individuals