In a study published on the bioRxiv* preprint server, a team of researchers test the neutralizing action of a panel of eight therapeutic monoclonal antibodies (MAbs) against a clinical strain of the severe acute respiratory syndrome coronavirus 2 (SARS-CoV-2) Omicron (B.1.1.529) variant.

The SARS-CoV-2 Omicron variant of concern (VOC) has over 30 mutations in its spike (S) glycoprotein region, which is a crucial antigenic region of the virus against which host cells initiate a neutralizing humoral response. These mutations could potentially reduce the efficacy of current clinically used vaccines and therapeutic antibodies against the Omicron variant. 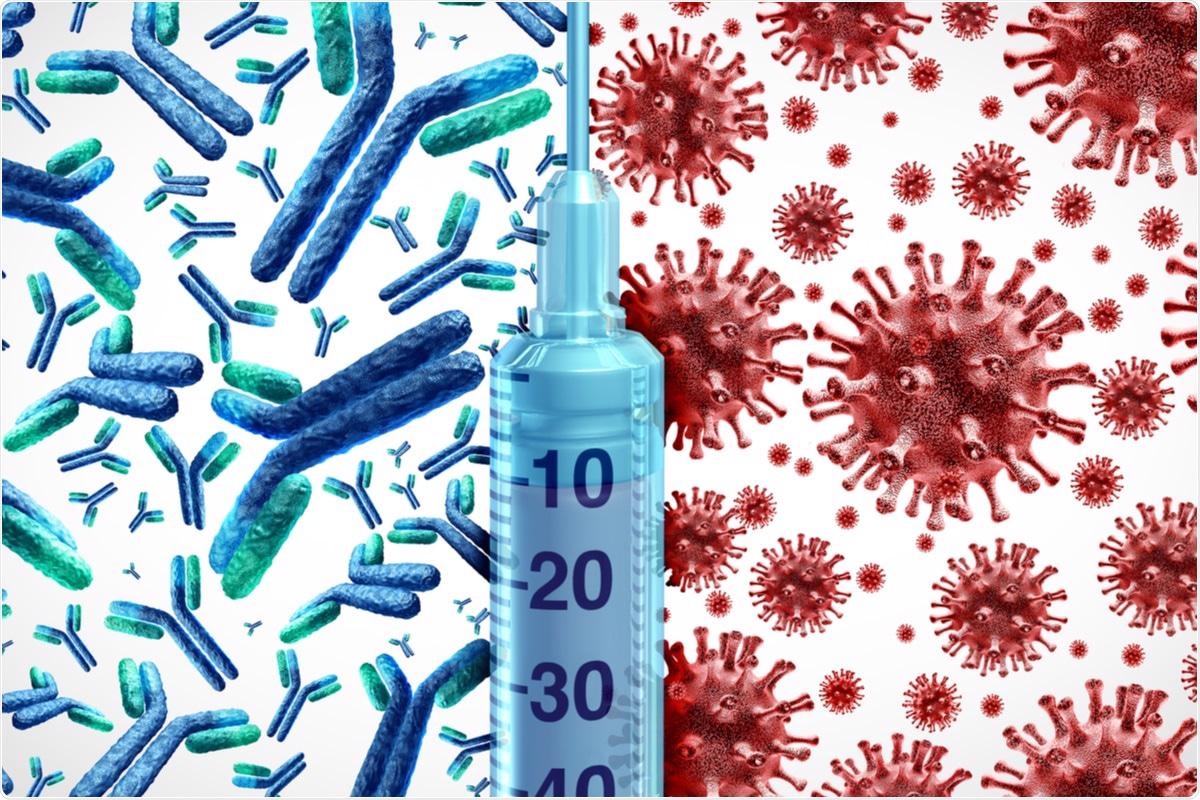 The D614G BavPat1 European strain of the B.1 lineage of SARS-CoV-2 was used as a reference to calculate the fold change between the 50% maximal effective concentration (EC50) determined for each virus. EC50 is the antiviral concentration required to inhibit viral ribonucleic acid (RNA) replication by 50%.

The researchers used a standardized RNA yield reduction assay in VeroE6 transmembrane protease serine 2 (TMPRSS2) cells and harvested the cell culture supernatants at 48 hours post-infection (hpi) during the logarithmic growth phase of viral replication. The MAbs were tested in triplicates using two-fold step-dilutions for Cilgavimab and Tixagevimab alone, and in combination from 1,000 to 0.97 ng/mL and from 5,000 to 2.4 ng/mL, respectively. The EC50 was determined by quantifying the amount of viral RNA in the supernatant medium using a quantitative reverse transcription-polymerase chain reaction (qRT-PCR) assay.

The study results demonstrated that six of these antibodies showed reduced ability to neutralize the Omicron variant. Of the antibodies with neutralizing activity, Sotrovimab/Vir-7831 showed the smallest reduction in neutralizing activity, with a factor change of 3.1. In accordance with preliminary reports, the EC50 of this antibody shifted from 89 to 276 ng/ml as compared to the ancestral B.1 strain. 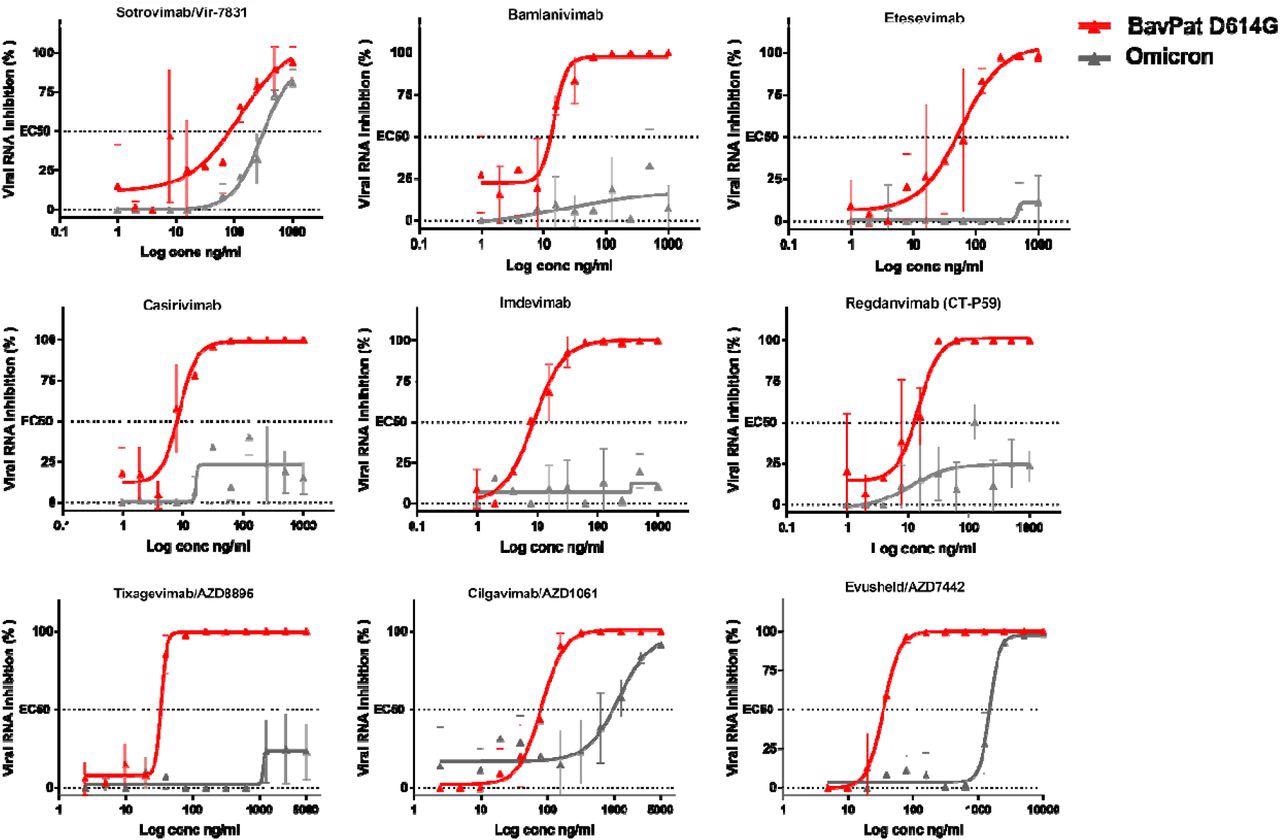 Cilgavimab/AZD1061 showed a reduction in the efficacy of 15.8, which resulted in a 42.6-fold reduction in neutralizing activity for the Evusheld cocktail in which the other antibody, Tixagevimab, did not retain significant activity against Omicron.

When Cilgavimab was tested in combination with Tixagevimab, as proposed in the Evusheld/AZD7742 therapeutic cocktail, the EC50 shifted from 35 to 1,488 ng/mL resulting in a fold change reduction of 42.6.

The neutralizing activity of Casirivimab and Imdevimab, Bamlanivimab and Etesevimab, as well as Regdanvimab under the study conditions were not detectable, thus preventing the researchers from calculating their EC50.

The observed reductions in neutralizing activities of the MAbs investigated in the present study should be seen in the context of the actual treatments given to COVID-19 patients. While a single intravenous injection of 500 mg Sotrovimab for the early treatment of COVID-19 infections is registered in the European Union, the Evusheld 300 mg cocktail (150 mg Tixagevimab + 150 mg Cilgavimab, intramuscular) is prescribed during prophylaxis in patients at high risk of developing severe COVID-19.

The number of neutralizing units present in each unit of proposed MAb treatment, based on calculated EC50 values, is expressed in millions of neutralization units 50 per treatment (MNU50).

To summarize, these study findings assert the need for a rapid evaluation of the clinical and therapeutic efficacy of the initially proposed 500 mg and 300 mg doses of Sotrovimab and Evusheld, respectively, against the SARS-CoV-2 Omicron variant. Existing doses, as well as those that are currently in development for combination therapies, also need to be modified for the early treatment and prevention of infection with the Omicron variant.

In a study posted to the medRxiv* preprint server, an interdisciplinary team of researchers analyzed whether alveolar epithelial cell necrosis...

The Biden administration announced that 14.5 million Americans have signed up for health insurance under the Affordable Care Act for...

A recent study conducted in an Egyptian hospital showed that treating moderate-to-severe COVID patients with either one of two antibiotics...

In a recent study published on the medRxiv* preprint server, researchers describe the kinetics of severe acute respiratory syndrome coronavirus...

In a recent study posted to the Research Square* preprint server and under review at Nature Portfolio journal, researchers tested...

A recent study published on the medRxiv* preprint server discusses the role of lateral flow device (LFD) testing in potentially...