T cells are an essential part of the control and execution of the body’s adaptive immune response against cancerous or infected cells.

Their centrality to this process has given rise to ongoing developments in immunotherapies designed to enhance the T cell response against cancer, for example, CAR-T cells, bispecific antibodies and checkpoint inhibitors.

These immunotherapies work by targeting different stages of the T cell activation and differentiation pathways. For example, they may be designed to increase T cell activation, improve the frequency of self-renewing memory cells, or lower levels of T cell exhaustion.

One of the most vital parts of developing novel therapeutics lies in the characterization of function through the use of in vitro assays. The majority of this work – especially in the flow cytometry field – has been undertaken using non-adherent cells or cell monolayers (2D).

There is, however, increasing evidence to support the application of advanced 3D tumor cell cultures, for example, spheroids and organoids. These models better reflect the in vivo scenario, resulting in improved clinical translation.

This article outlines a straightforward, robust workflow for measuring T cell response in a spheroid T cell killing assay. This workflow is made possible thanks to the iQue® Advanced High Throughput Flow Cytometer and its related suite of validated reagents.

Screening and profiling studies can be consistently enhanced by combining the power of the iQue® and automated, integrated analysis techniques with immediate pharmacological readouts.

This robust combination of tools allows the in-depth analysis of the impact of novel immunotherapies on T cell response.

Spheroids are formed in ULA plates before immune cells (PBMCs or T cells) are added. It is possible to acquire a number of 10 µL supernatant samples from a single assay plate, enabling kinetic cytokine quantification. 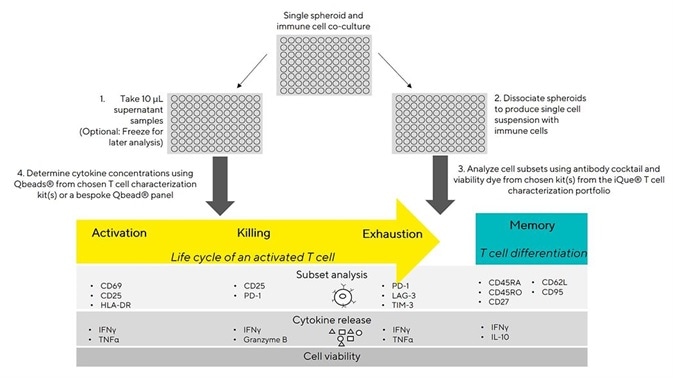 Spheroids are dissociated at assay endpoint in order to create a single cell suspension containing immune cells and target cells. Cells and cytokines can be analyzed using the range of iQue® T cell characterization kits (Activation, Killing, Exhaustion and Memory).

These antibodies are coupled with 2-plex iQue Qbeads® to quantify secreted cytokine concentration. It is also possible to simultaneously measure cell proliferation (optional) and viability in each well.

This approach offers a number of key benefits, allowing users to perform a range of key analysis types.

These advantages are highlighted below via a series of examples.

On days 1, 3 and 7, identical plates were dissociated before T cell phenotypes were analyzed with the iQue® Human T Cell Killing Kit.

The study determined that target cell viability demonstrated a notable decrease from day 1 to day 7 when exposed to the highest concentrations of Immunocult.

Expression of T cell activation and exhaustion markers were observed to increase from day 1 to day 3 before decreasing by day 7. Granzyme B is a protease directly involved in inducing T cell mediated tumor cell death. Its release was found to increase with Immunocult concentration.

Supernatant samples (10 µL) were acquired on days 1, 4 and 8. The analysis of cytokine concentrations was done using iQue Qbeads®. Concentrations of cytokines indicative of T cell activation – IFNγ and TNFα – were found to increase over time and in line with Dynabead density.

It was also noted that the release of Granzyme B protease also increased. This is directly involved in target cell killing by cytotoxic lymphocytes. Production of IL-10 – recognized as a cytokine with links to the rate of T memory cell formation – increased to day 4 then was noted to decrease by day 8.

Analysis was done on cells from replicate plates on days 1, 4 and 8 via the iQue® Human T Cell Activation, Killing and Exhaustion kits. Figure A shows a plate view plot of CD25+ cells in the live CD3+ population, while Figure B shows target cell viability decreasing over time.

Figure C highlights the expression of early activation marker CD69. This had initially increased on day 1 before decreasing by day 4.

Figure D shows CD25 – a later activation marker expression that was enhanced on days 4 and 8. Figure E highlights the expression of PD-1, an early indicator of T cell exhaustion. This was found to be the greatest on day 4. 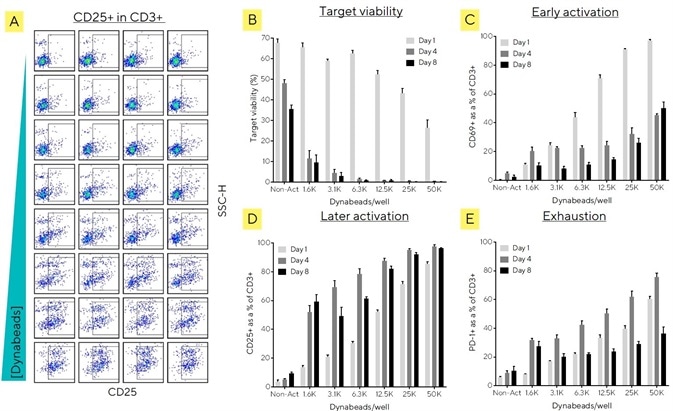 BT474 spheroids (2.5K/well) were incubated with PBMCs. This was done at a 5:1 effector-to-target ratio (E:T) with activation-induced via CD3/CD28 Dynabeads.

Analysis was done after 24 hours using the iQue® Human T Cell Memory Kit. Figure A shows a plot highlighting gating of Tscm (stem cell memory) and Tte (terminal effector). This was done using the template provided in the kit.

It was also noted that this shift was accompanied by a loss in the T cells’ ability to self-renew.

Proteins are bio-macromolecules with a range of functionalities as a result of complex higher-order structures. As the end product of...

Cancer is a major global health concern. In line with GLOBOCAN 2020 estimates of cancer incidence and mortality from the...

A virus is a simple life form made up of genetic materials (DNA or RNA) and an outer shell mostly...

B cells play a vital role in the immune system, given their key function in antibody production. Antibodies, also known...

Recombinant antibodies (rAbs), also called genetically engineered antibodies, are produced by cloning the antibody which is made of light and...

One of the most sophisticated technologies in molecular biology is Quantitative real-time PCR (qPCR).1 In a conventional polymerase chain reaction (PCR),...