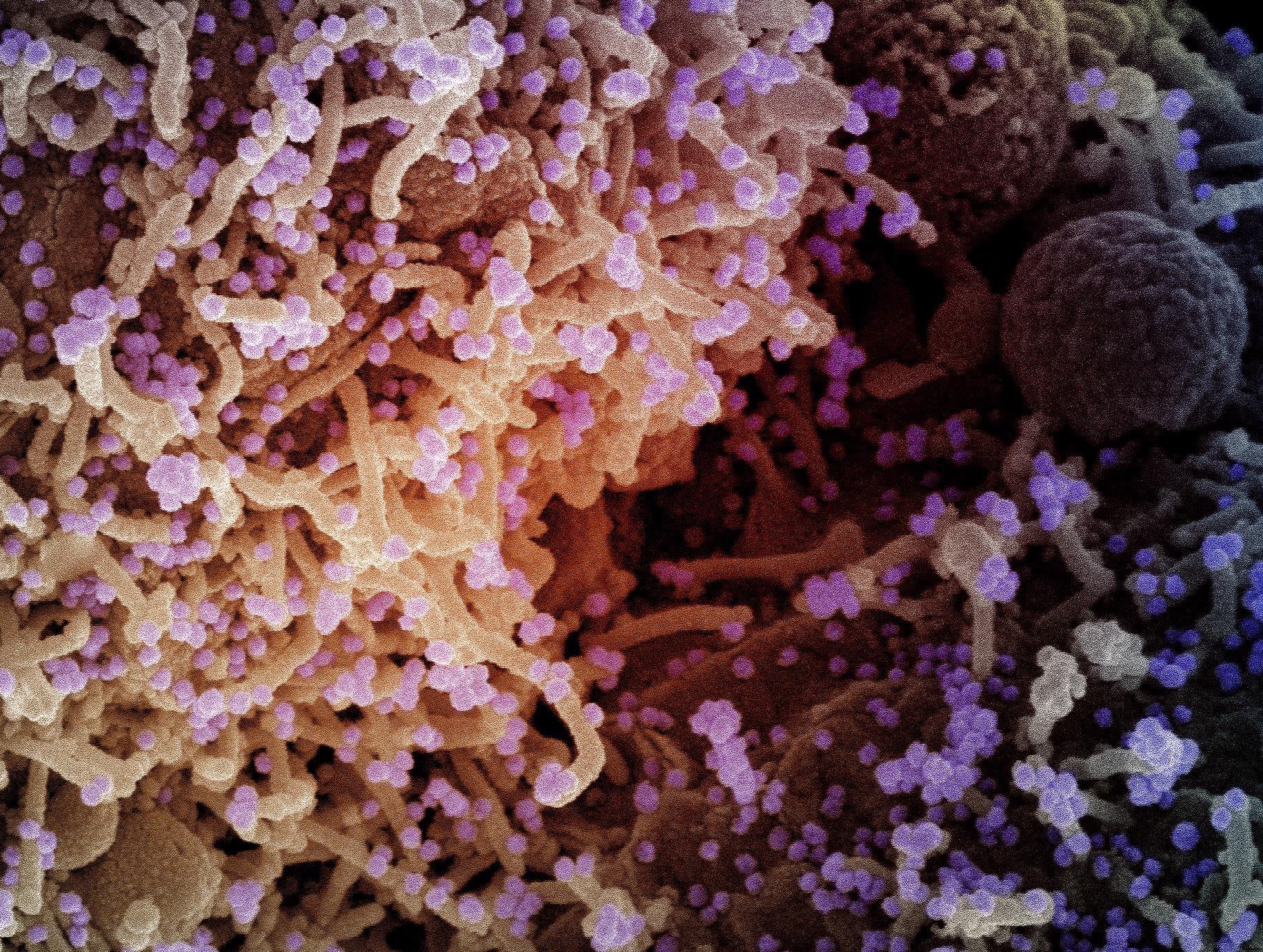 The ongoing COVID-19 pandemic caused by SARS-CoV-2 has resulted in more than 477 million infections and over 6.1 million deaths worldwide. The vaccines developed at the later phase of the pandemic have shown high efficacy in preventing SARS-CoV-2 infection, symptomatic COVID-19, hospitalization, and mortality. Because of the global mass vaccination campaigns, an initial drop in COVID-19 cases has been observed in many countries. However, with the emergence of novel viral variants, including delta and omicron, a significant reduction in vaccine efficacy has been observed globally. A sharp rise in vaccine breakthrough cases has prompted public health authorities of many countries to introduce a third booster dose to the at-risk population to curb viral transmission. The development of new vaccines against emerging viral variants has also been advised.

In the current study, the scientists have developed and validated an mRNA-based vaccine that encodes an engineered nanoparticle displaying delta RBD as an immunogen. Specifically, a protein nanoparticle scaffold comprising 60 identical subunits of the self-assembling bacterial protein lumazine synthase has been used to display multimeric RBD of the SARS-CoV-2 delta variant.

To ensure effective delivery of the vaccine candidate, the scientists have complexed the mRNA construct with protamine, a small arginine-rich DNA-binding nuclear protein. Protamine has been widely used to condense and protect RNAs from degradation and prepare self-adjuvanted vaccines.

The vaccine-induced antibody response was measured by intramuscularly injecting the mice with two doses at week 0 (prime) and week 3 (booster). The serum samples were collected from immunized mice before the first and second doses and three weeks after the second dose to measure neutralizing antibody titers.

The findings revealed that all immunized mice have high titers of neutralizing antibodies targeting the delta RBD at week 3 before administering the second vaccine dose. The samples collected 3 weeks after the second dose showed significantly higher antibody titers.

The virus neutralization assay was conducted using the authentic SARS-CoV-2 delta variant to assess the infection-protecting efficacy of vaccine-induced antibodies. Serum samples collected from human patients immunized with the two-dose regimen of mRNA-based Pfizer-developed COVID-19 vaccine were used as a positive control. 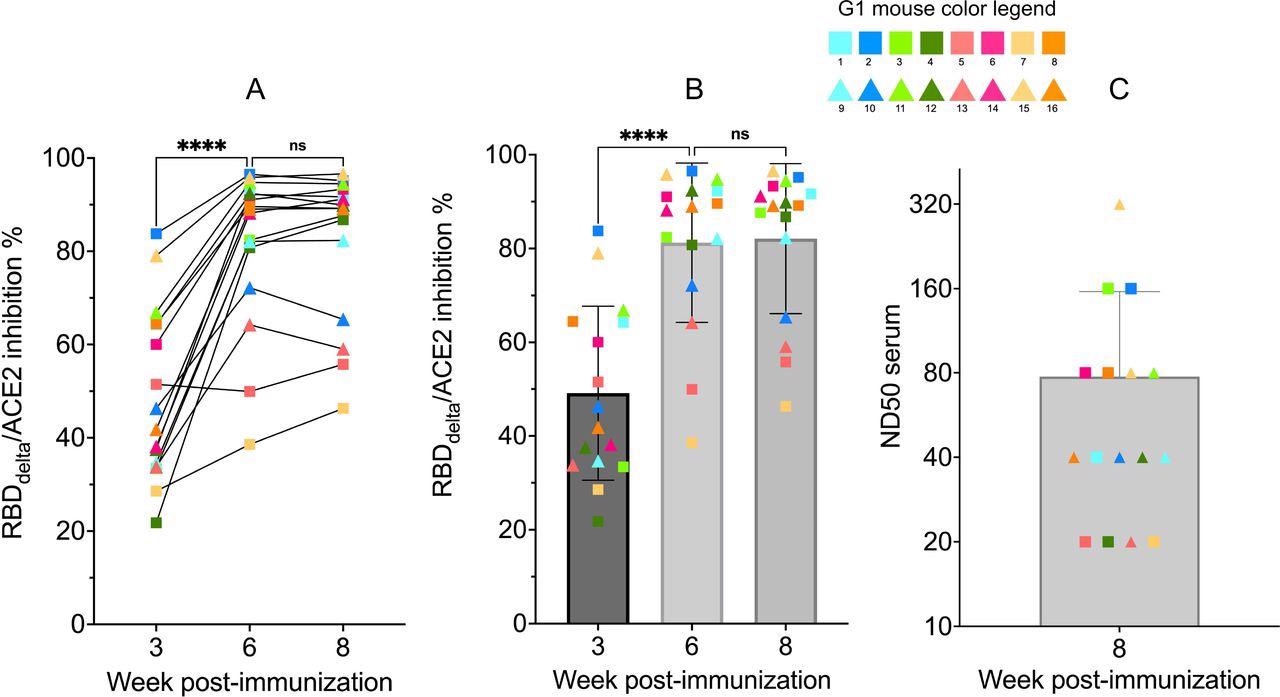 Protective efficacy of the vaccine

The vaccine’s protective efficacy against delta infection was assessed in transgenic mice expressing human angiotensin-converting enzyme 2 (ACE2). The mice were immunized with the vaccine using the same vaccination regimen. Five weeks after full immunization, all mice were challenged intranasally with SARS-CoV-2 delta variant and followed up for 14 days post-infection.

Regarding cellular immune response, immunized mice showed significantly lower expression of pro-inflammatory cytokines and chemokines compared to unimmunized mice at day 3 post-infection. In addition, significantly elevated expressions of CCL5 and IL12 were observed in immunized mice. Both IL12 and CCL5 play essential roles in inducing T cell proliferation, expansion, and activation. Taken together, these observations indicate that the vaccine is capable of generating robust and durable cellular immune responses against the delta variant.

The study describes the development and validation of an mRNA-based nanoparticle-formulated COVID-19 vaccine encoding the RBD of the SARS-CoV-2 delta variant. The vaccine exhibits high efficacy in inducing anti-delta RBD neutralizing antibodies, which correlates significantly with the level of protection observed against severe COVID-19 in immunized mice.

As mentioned by the scientists, the mRNA-based nanoparticle-formulated vaccine developed in the study could be used as a flexible platform for rapidly developing effective vaccines against future variants of concern.

Data continue to show the importance of vaccination and booster doses to protect individuals both from infection and severe outcomes...

How effective are household cleaning agents against SARS-CoV-2?

The severe acute respiratory syndrome coronavirus 2 (SARS-CoV-2), the causal agent of the coronavirus disease 2019 (COVID-19), belongs to the...

The longest duration of SARS-CoV-2 positivity after initial diagnosis