A study posted recently to the bioRxiv* preprint server demonstrated that the emergence of new spike variants of severe acute respiratory syndrome coronavirus-2 (SARS-CoV-2) can be predicted. 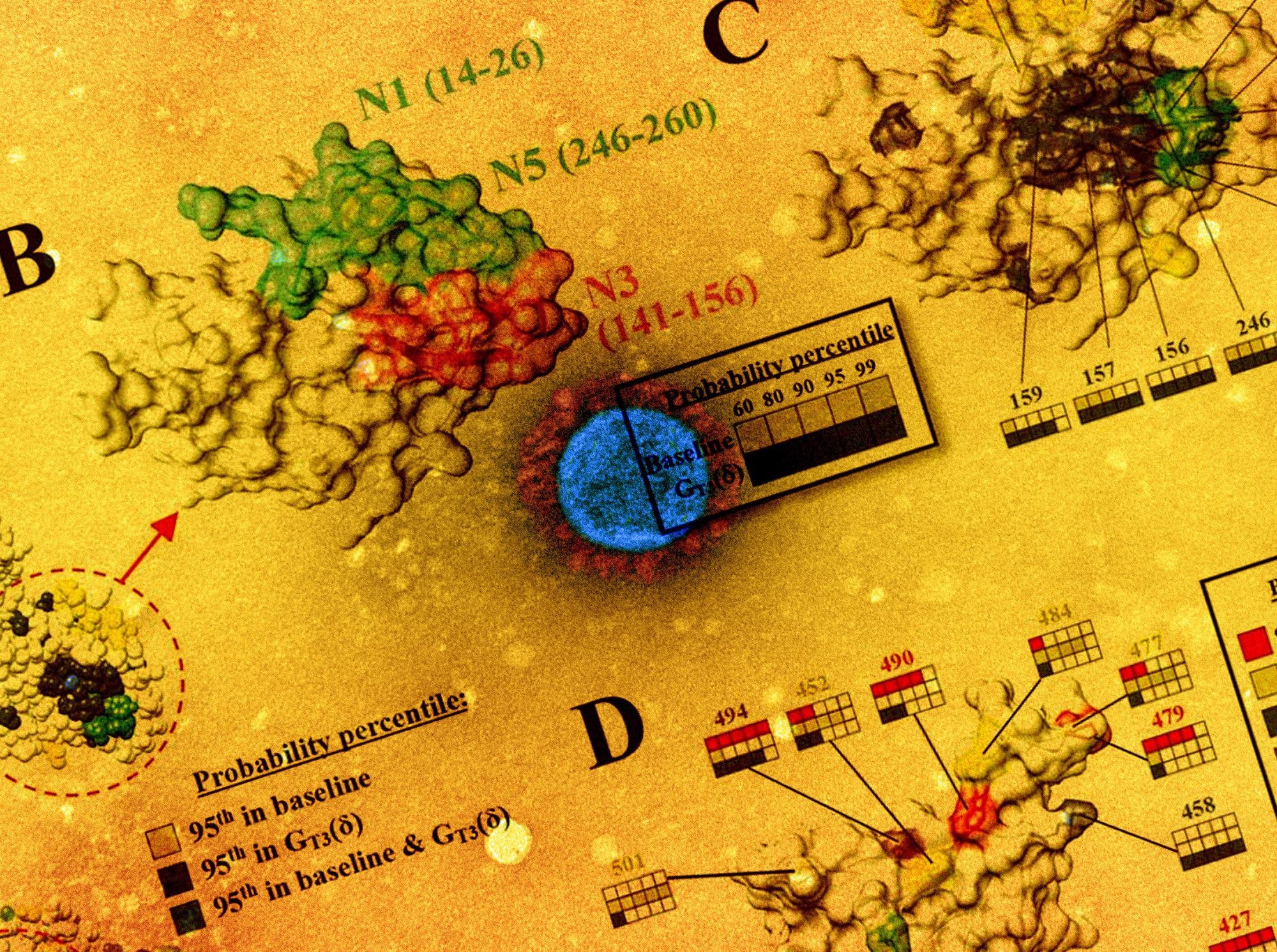 Study: Patterns of Volatility Across the Spike Protein Accurately Predict the Emergence of Mutations within SARS-CoV-2 Lineages. Image Credit: NIAID

Throughout the coronavirus disease 2019 (COVID-19) pandemic, several SARS-CoV-2 variants have emerged. New variants present novel characteristics that may enhance their infectivity, transmissibility, and clinical disease severity and decrease the sensitivity to the vaccine or infection-induced immune responses. One such example is the latest SARS-CoV-2 variant, the Omicron, which has over 35 mutations and has rapidly spread across the globe, leading to a record-high number of infections.

Reports suggest that SARS-CoV-2 Omicron has evolved to a greater extent than previous variants, and it exhibits immune-evasive traits, increased transmissibility, and resistance to available vaccines and therapeutics. Further, as SARS-CoV-2 mutates and evolves, more variants might appear in the future. Therefore, research is required to predict the emergence of new variants to proactively design countermeasures against them.

In the current study, researchers investigated whether new variants/mutations of the SARS-CoV-2 spike (S) protein could be forecast by studying the amino acid (aa) variability patterns in small virus clusters that chronologically and phylogenetically precede such events. Sequences of the spike from the initial phases of the COVID-19 pandemic were grouped into small clusters and the authors calculated 1) the extent of aa variability, 2) the aa variability at adjacent sites in the 3D structure of the S protein, and 3) positions where aa variability co-occurred with the site of interest.

The team obtained over 600,000 sequences of the S gene, filtered them, and identified around 16,808 unique S sequences. A maximum-likelihood tree was generated, and the tree was divided into groups with a distance of 0.004 nucleotide substitutions per site. A threshold of 0.0015 nucleotide substitutions per site was set to distinguish between baseline and terminal emergent groups. The sequences in baseline groups were clustered into subsets of 50 sequences and every site in S was assessed for the presence or absence of variability and a mean variability score i.e., volatility, was assigned for each position. 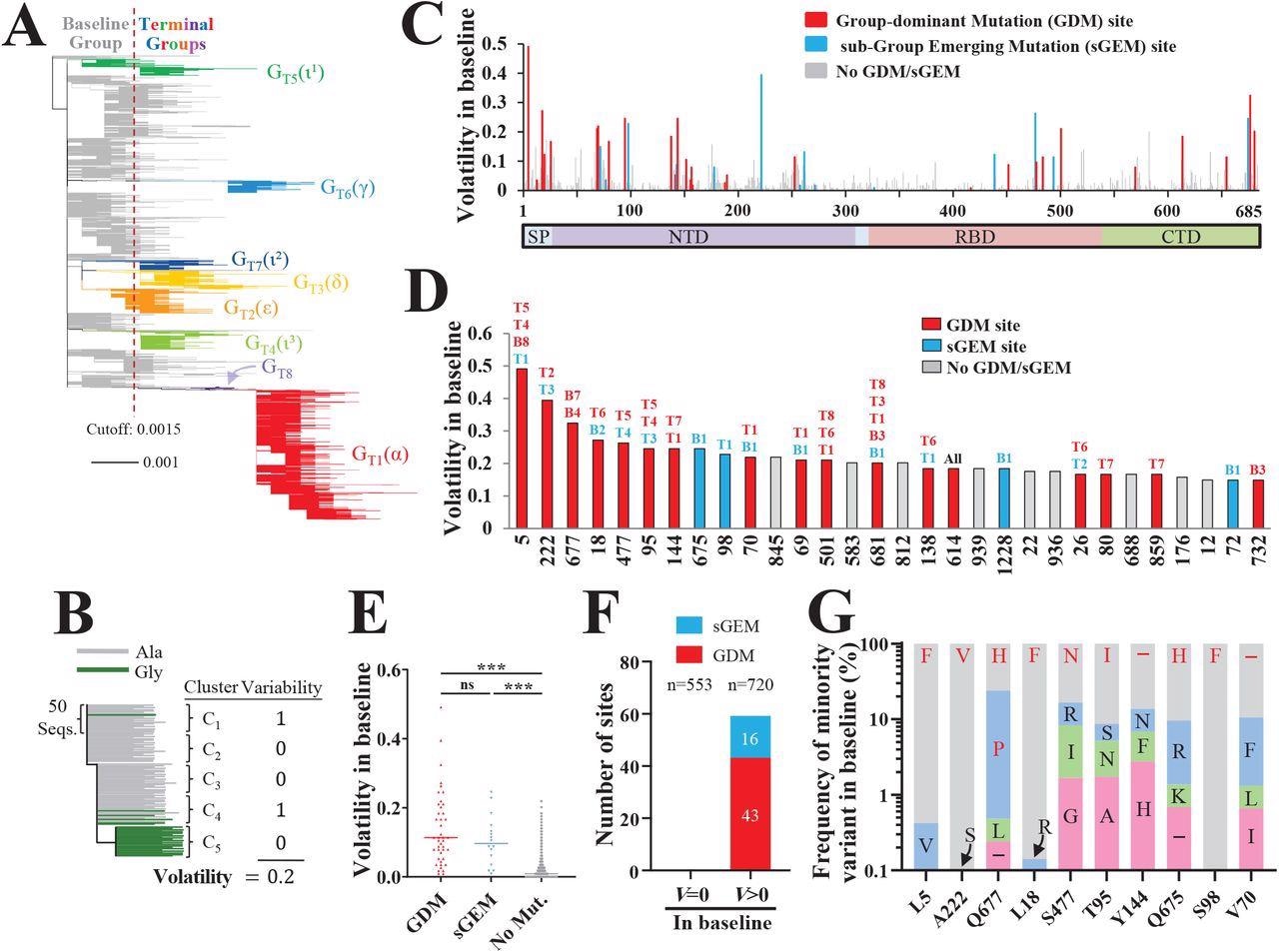 Spike positions with high volatility appear as sites of group-dominant or subgroupemerging mutations. (A) Phylogenetic tree based on 16,808 unique spike sequences. Terminal groups are colored and labeled, with their WHO variant designations in parentheses. (B) Schematic of our approach to calculate volatility for each position of spike. (C) Volatility values for all positions of spike subunit S1, calculated using the 114 baseline clusters (see values for S2 subunit in Figure S1C). (D) Thirty spike positions with the highest volatility values. The baseline (“B”) or terminal (“T”) groups that contain mutations at these positions are indicated. (E) Comparison of volatility values for spike positions that emerged with a GDM, sGEM or no such mutations. P-values in an unpaired T test: ***, P<0.0005; ****, P<0.00005; ns, not significant. (F) Number of sites that appeared with GDMs and sGEMs when volatility (V) in the baseline group was zero or larger than zero. The number of site in each subset (n) is indicated. (G) Frequencies of minority variants (nonancestral residues) at the ten positions of spike with the highest volatility values (see panel D). Frequencies are expressed as a percent of all sequences with a non-ancestral residue at the indicated position. The residues that emerged as GDMs or sGEMs are indicated in red font.

The baseline volatility scores of each aa were mapped onto the 3D structure of the S protein which revealed various clusters with high volatile sites particularly in the spike’s N-terminal domain (NTD). The authors noted that the presence of a volatile site adjacent to these (mapped) sites increased their likelihood of volatility, suggesting that a highly volatile environment in the vicinity could influence the occurrence of new volatile sites.

Furthermore, the authors investigated the factors governing the emergence of a mutation as GDM and sGEM. A co-volatility network was constructed using P-values of Fisher’s exact test that quantified the co-occurrence of volatile sites at any two S sites. They observed that the existence of high volatility, for any site in the S protein, at its network-associated position increases its odds to emerge as GDM or sGEM. 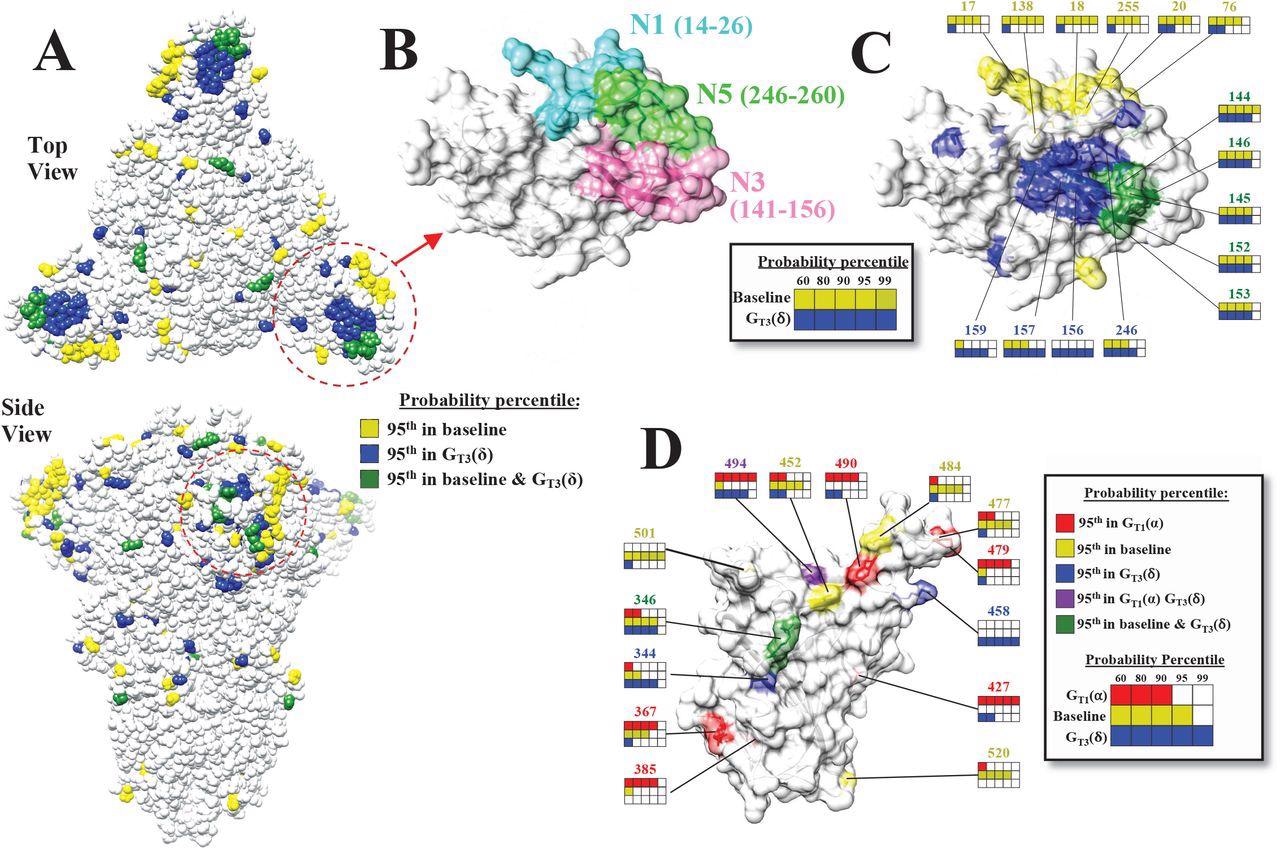 Sequences from the early periods of the pandemic (December 2019 to September 2021) were used as early-phase sequences to forecast the emergence of new mutations (lineage-defining mutations or LDMs) in lineages that appeared between October 2020 and June 2021. Volatility profiles were evaluated, which showed that the high volatility at any position of S protein and its network- and spatial-associated sites temporally preceded the emergence of lineage-defining mutations in the population. Using this model, the authors were able to identify Omicron-mutations in the samples collected from March 2021 until November 2021.

The evolution of SARS-CoV-2 into newer variants is alarming as they present with enhanced pathogenic traits undermining the scope of current vaccines and therapeutics. Consequently, there is a growing demand for the development of variant-specific vaccines to address the emergent challenges. However, nucleic acid-based vaccines can be modified to be specific to SARS-CoV-2 variants but require additional clinical studies to test their safety and efficacy, which is time-consuming.

Therefore, tools to forecast the emergence of new mutations are required, and the present study has demonstrated a simple framework for such early predictions. Based on an early forecast of imminent mutations, designing immunogens specific to the lineages could be beneficial to mitigate the COVID-19 pandemic.

bioRxiv publishes preliminary scientific reports that are not peer-reviewed and, therefore, should not be regarded as conclusive, guide clinical practice/health-related behavior, or treated as established information

The ongoing coronavirus disease 2019 (COVID-19) pandemic, which was caused by the severe acute respiratory syndrome coronavirus 2 (SARS-CoV-2), has...

Severe acute respiratory syndrome coronavirus 2 (SARS-CoV-2) that has brought about the coronavirus disease 2019 (COVID-19) pandemic is a single-stranded...

The binding responses and temporal dynamics of antibodies elicited against the severe acute respiratory syndrome coronavirus 2 (SARS-CoV-2) due to...

To prevent the further spread of coronavirus disease-19 (COVID-19) infection, caused by the severe acute respiratory syndrome coronavirus-2 (SARS-CoV-2), most...

A recent study has revealed a full cycle of substrate cleavage for the main protease of the severe acute respiratory...

Since the onset of the coronavirus disease 2019 (COVID-19) pandemic, caused by the rapid outbreak of severe acute respiratory syndrome...