Severe acute respiratory syndrome coronavirus 2 (SARS‑CoV‑2) infection is usually diagnosed via reverse transcription PCR or RT-PCR, but this method is far from perfect. According to one review, RT-PCR has a real-world sensitivity of about 70% and a specificity of 95%, although negative results do not necessarily indicate a negative diagnosis.

Additionally, a systematic analysis of individual patient data found that RT-PCR frequently misses SARS‑CoV‑2 and that early sampling may reduce false negatives. Consequently, these tests are often more helpful in ruling in COVID-19 than in ruling it out.

In cases where an RT-PCR test is negative, but a patient presents with symptoms of COVID-19, additional tests may be necessary.

Given the exponential rise in the number of COVID-19 cases worldwide and the mounting strain on medical resources, automated diagnostic methods may effectively reduce the burden on reporting radiologists.

CT (computed tomography) images are made up of many slices, creating a three-dimensional (3D) effect. A fundamental limitation of previously reported measures using CT-scan image-based methods is the need for the same number of slices as their inputs which is not viable in different CT volumes.

Three common limitations of such models are a lack of adequately documented methods for reproducibility, failure to follow standard regulatory protocols for developing deep learning models, and an absence of external validation studies to validate the program in the real-world population.

Researchers have aimed to address the issues mentioned above in a recent study posted to the medRxiv* preprint server.

The proposed mixed-effects model was developed using data from Russia and China retrospectively. Data in Russia were collected between March 1, 2020, and April 25, 2020. The China Consortium of Chest CT Image Investigation (CC-CCII) provided data between January 25, 2020, and March 27, 2020. The study involved data from 1,110 and 796 patients with either COVID-19 or healthy CT volumes from Russia and China, respectively. 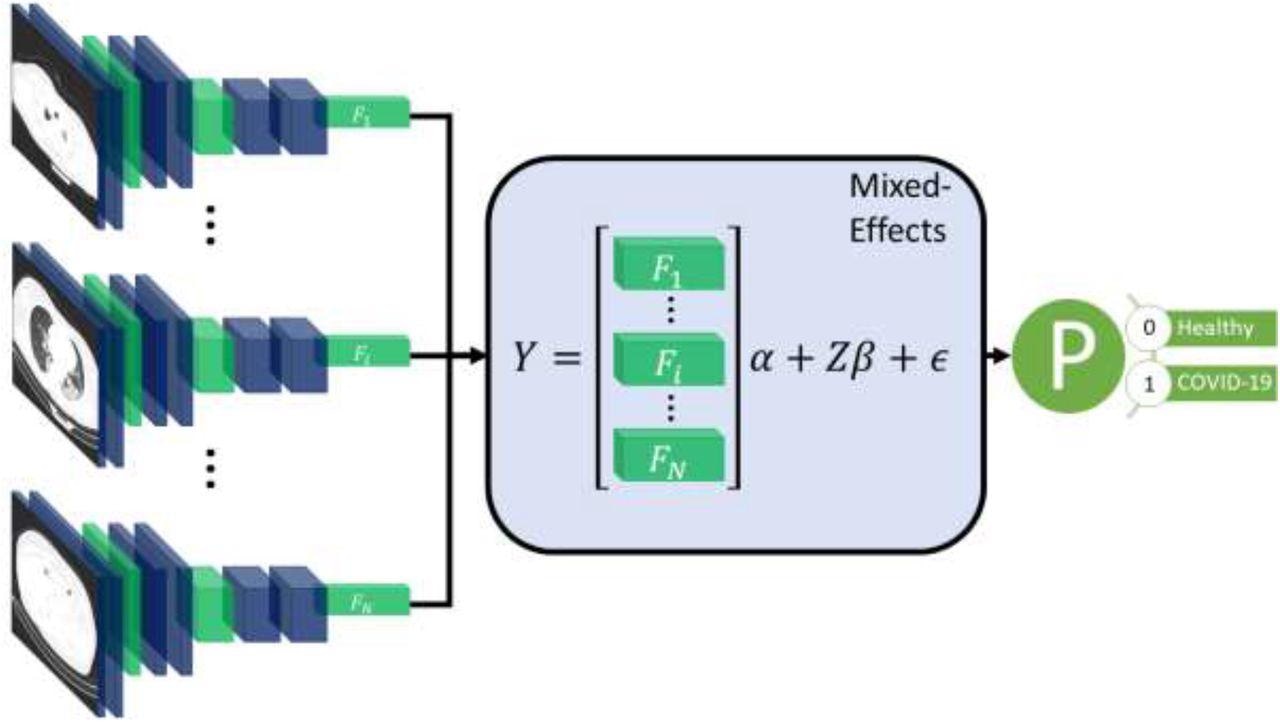 Diagram of the overall framework. Twenty slices are chosen from a CT volume. Each slice is fed into a CNN with shared weights, which outputs a feature vector of length 2048 for each image. The feature vectors form a 20-by-2048 fixed effects matrix, X, for the GMM model with a random-effects matrix, Z, consisting of an identity matrix. A mixed-effects model is used to model the relationship between slices. Finally, a fully connected layer and sigmoid activation return a probability of the diagnosis. 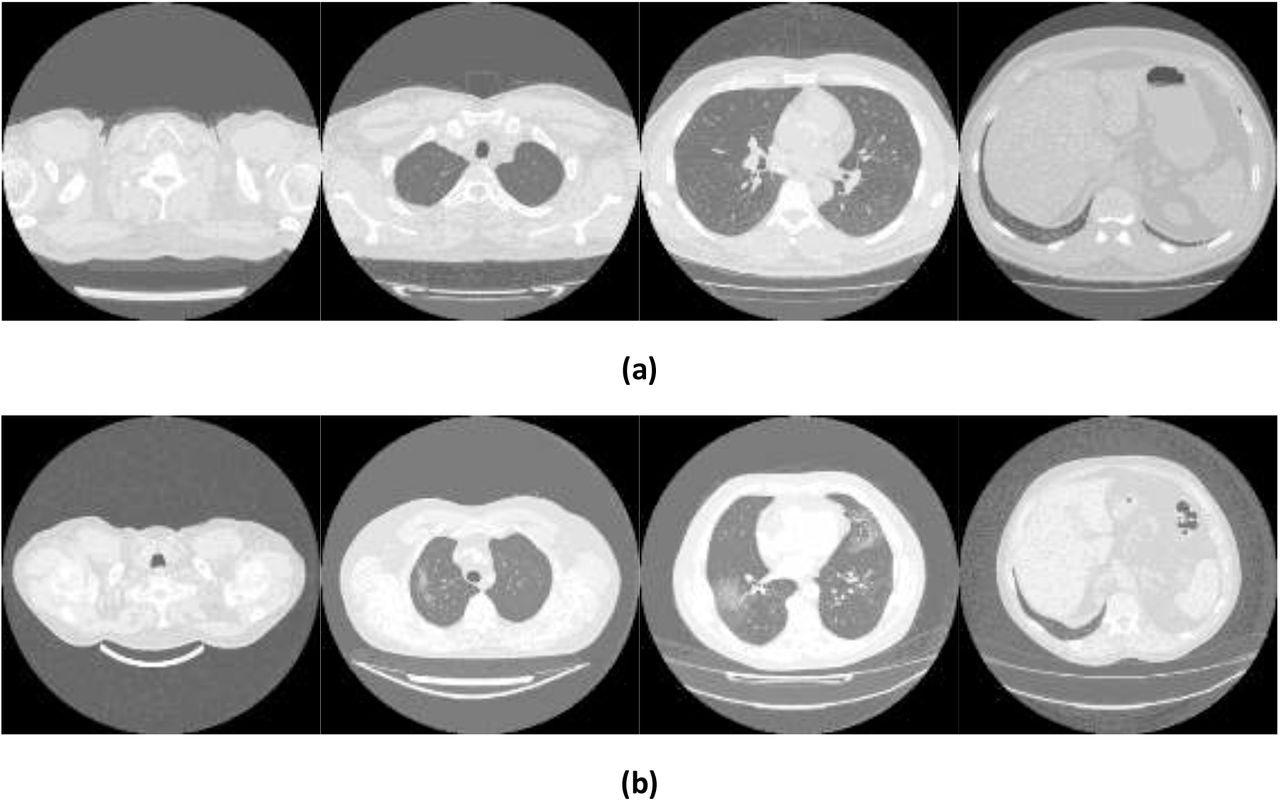 Example images showing (a) healthy and (b) COVID-19 lungs taken from the Mosmed dataset.

First, a series of CT slices forming a CT volume was fed to the model. This step was followed by a mixed-effects layer that concatenates the feature vectors into a single vector. Finally, a fully connected layer followed by a sigmoid activation gave a probability of COVID-19 for the whole volume. The mixed effects and fully connected layer with sigmoid activation were analogous to a linear GLMM in traditional statistics.

For the feature extractor, the researchers used InceptionV3, a Convoluted Neural Network (CNN). After selecting the neural network, researchers used a global average pooling layer to reduce each image to a feature vector for each slice, with a dropout of 0.6 to improve generalizability to unseen images. The feature vectors were then transformed into a 20 × 2048 matrix. The novelty of this process lay in researchers using a mixed-effects layer previously only used in hardcore statistical calculations to model the relationship between slices.

When 20% of the CT-scan images were missing in the validation dataset, there was a statistically significant reduction in the model’s predictive performance. Although, even at 50% data-missingness, the model continued to perform relatively well, with an AUROC of 0.890 (95% CI: 0.868, 0.912), highlighting its robustness.

This study is another indicator of leveraging the power of deep learning for screening and monitoring COVID-19 in a clinical setting. However, validation in the intended setting is vital, and models should not be adopted without this. This study also highlighted the importance of external validation in developing a robust model for disease prediction.

Innate and adaptive immune responses to BNT162b2 vaccination in mice

In a recent study published in Nature Immunology, researchers analyzed the innate and adaptive responses to the messenger ribonucleic acid...

Characteristics of super-spreaders of novel coronaviruses

In a recent study posted to the medRxiv* pre-print server, researchers conducted a systematic review to evaluate the characteristics of...

In a recent study published in Emerging Infectious Diseases, researchers conducted a retrospective analysis to evaluate the duration of the...

A recent study posted to the bioRxiv* preprint server assessed the role of hypoxia-inducible factors (HIF) in severe acute respiratory...

In a recent study published Cell Reports Physical Science, scientists have described a virus-blocking textile that prevents transmission of severe...