A recent groundbreaking research paper published in the journal Nature Communications reveals the association of circulating SARS-CoV-2-specific T cells at exposure with lack of infection – implying the protective role for cross-reactive immune T cells in coronavirus disease 2019 (COVID-19) and opening the door for second-generation vaccines that could circumvent spike-antibody immune escape variants. 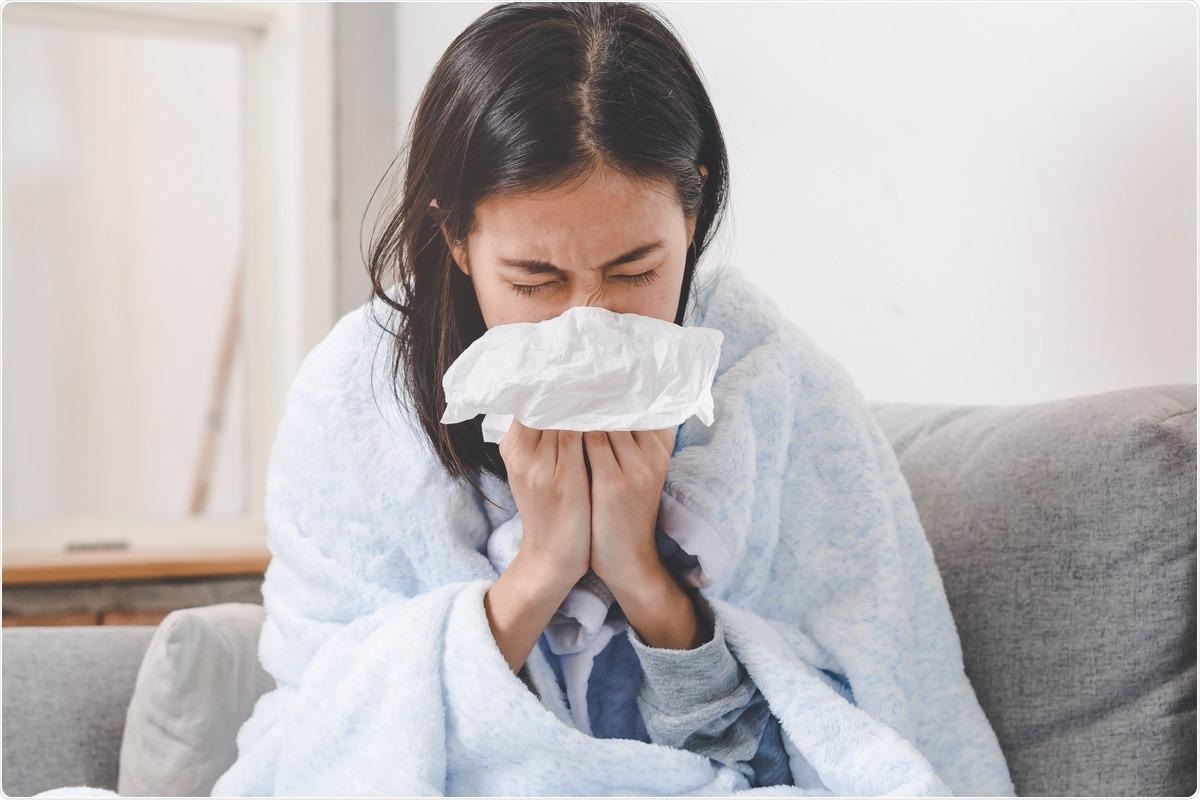 Despite all the efforts to distribute effective vaccines against the severe acute respiratory syndrome coronavirus 2 (SARS-CoV-2), we are still not entirely certain about the exact correlates of protection. Moreover, exposure to this virus does not necessarily result in infection, as pre-existing T cells (primed by endemic circulating human coronaviruses might mediate protection in individuals that were never infected with the virus.

And indeed, the prevalence of such pre-existing cross-reactive T cells has often been touted as a pivotal factor that can mediate the outcome after exposure to SARS-CoV-2. However, the exact evidence of whether these T cells can provide a desired protective effect has been elusive.

Some scientific reports have proposed that SARS-CoV-2 infection may actually induce T cells without prompting the production of antibodies, but such a scenario is highly unlikely; a much more realistic scenario is the expansion of pre-existing T cells from prior exposure to human coronaviruses.

In this new study, first-authored by Dr. Rhia Kundu from the Imperial College London in the United Kingdom, a total of 52 household contacts of newly diagnosed COVID-19 cases were appraised in order to capture the earliest time-points after SARS-CoV-2 exposure when analyzing host response in depth.

Researchers in this paper have quantified T cells specific for in silico-predicted and biologically confirmed pools of cross-reactive epitopes from five SARS-CoV-2 proteins, alongside specific spanning peptide pools representing the whole protein.

This was done with the use of a highly sensitive dual cytokine fluorescence-linked immunospot (FLISpot) assay on peripheral blood mononuclear cells (that were cryopreserved before using this method) for detecting both interferon-gamma and interleukin-2 (IL-2). 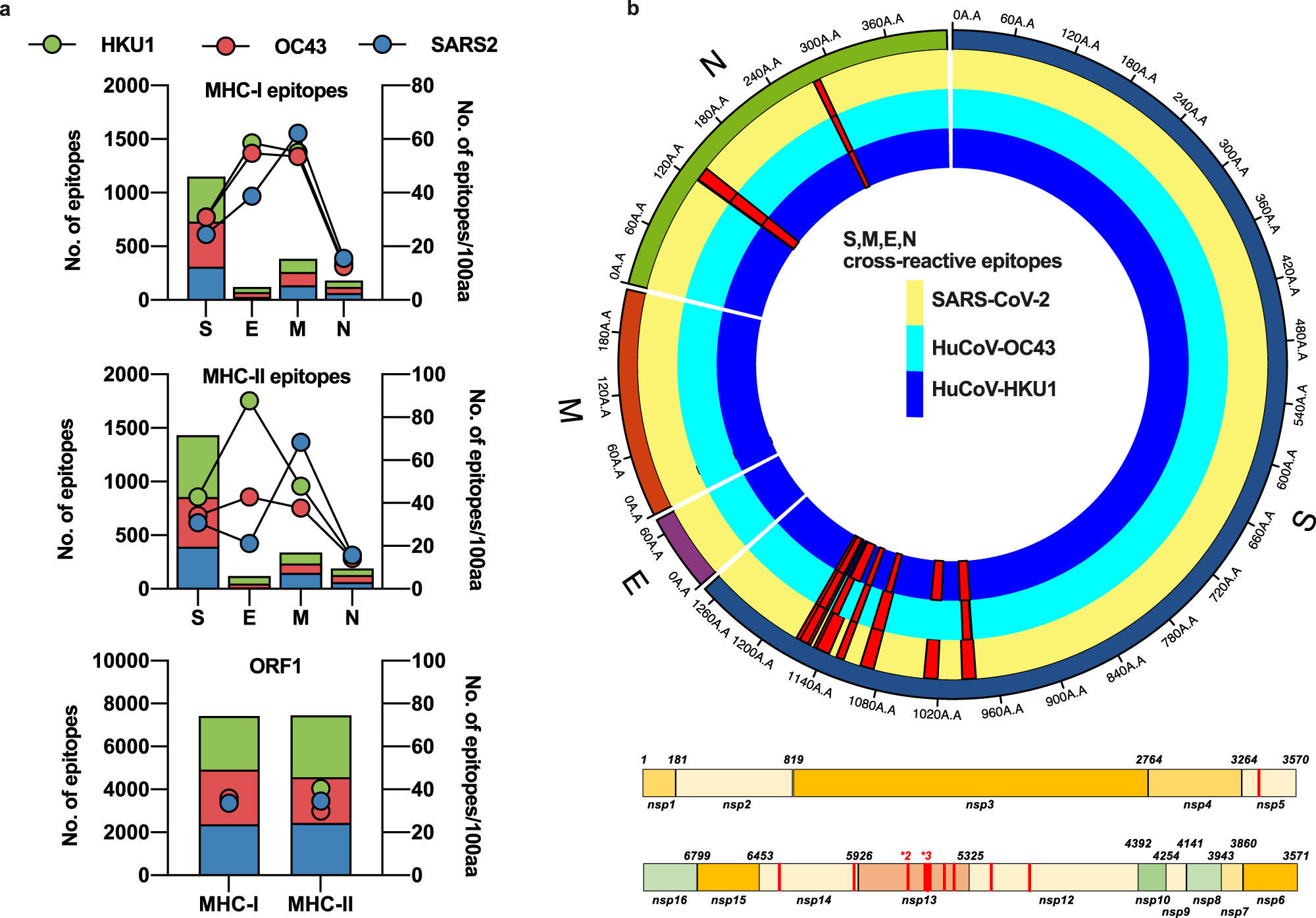 Available sequences for S, M, E, N and ORF1 from SARS-CoV-2, huCoV-OC43 and huCoV-HKU1 were assessed for potential HLA-binding motifs by SYFPEITHI and IEDB as described in the Methods. The number of predicted epitopes is presented in the stacked bar charts and the immunogenicity for each protein of each virus is depicted as points on the right Y-axis. Green bars and circles depict huCoV-HKU1 (HKU1), red huCoV-OC43 (OC43) and blue SARS-CoV-2 (SARS2) (a). The predicted cross-reactive epitopes and their prevalence within each virus for all sequences available are mapped as red histograms in a linear plot for ORF1 and a radial plot for S, M, E, and N. All mapped cross-reactive epitopes within ORF1 were present across SARS-CoV-2, HKU1, and OC43. Within the radial plot, the yellow track represents the SARS-CoV-2 sequence, dark blue HKU1 and light blue OC43, with red histograms representing the prevalence of the putative epitope across the viruses (b). Image Credit: Nature Communications

While conducting the experiments, the researchers have observed a higher frequency of nucleocapsid-specific and cross-reactive IL-2-secreting memory T cells in contacts who have remained PCR-negative despite exposure compared with those who convert to PCR-positive.

The authors argue that antibodies against human coronaviruses can be viewed as a marker of prior exposure to these viruses, whereas the cross-reactive memory T cells mediate true protection; nonetheless, it is also possible that the antibodies bestow or mediate protection themselves.

On the other hand, there were no significant differences in the frequency of responses to SARS-CoV-2 spike glycoprotein, implying a somewhat limited protective function of spike-cross-reactive T cells, which is an important finding.

Notably, this underscores the importance of non-spike glycoprotein targets (especially nucleocapsid and ORF1) for T cell-mediated protection when there are no neutralizing antibodies, which is highly consistent with the wide array of antigen-specific T cells induced by SARS-CoV-2 infection and cross-reactive T cells in pre-pandemic cohorts.

“In light of this, the inclusion of these targets alongside the major antibody target of spike glycoprotein could be critical in maintaining the benefit of vaccination in the case of vaccine-strain mismatch, as could occur with the emergence of novel variants”, emphasize study authors in this Nature Communications paper.

In short, this is basically the first study that aims to detect ex vivo IL-2 and interferon-gamma responses, which likely correlate with central memory T cell responses specific for cross-reactive epitopes in contacts of COVID-19 cases early after exposure. Moreover, the study suggests that the initial frequency of IL-2-secreting cross-reactive T cells can be linked to COVID-19 infection protection among contacts.

“Our study complements the small but growing body of evidence that T cells may protect against SARS-CoV-2 infection and supports the potential utility of second-generation vaccines targeting core proteins”, say study authors.

As the long-term utility of purely spike-based vaccine is uncertain in the era of emerging SARS-CoV-2 variants, these types of studies will be pivotal in further guiding research endeavors in the field, but also our public health response against the ongoing COVID-19 pandemic.